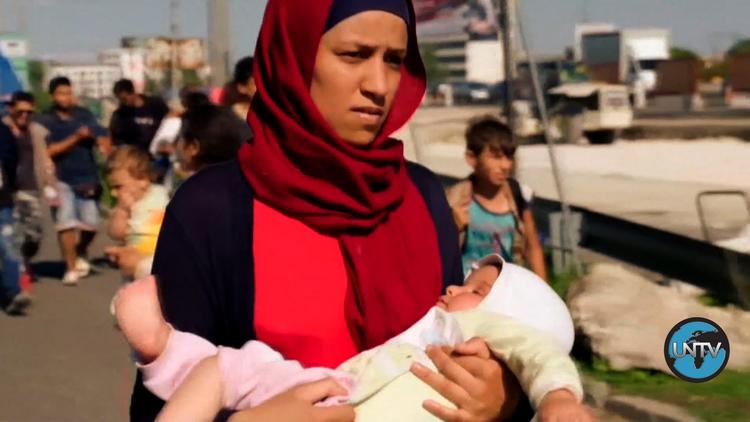 UNITED NATIONS, Dec 16 2015 (IPS) – When German Chancellor Angela Merkel defended her immigration policies early this week — and announced plans to absorb about one million refugees, mostly from Syria — she was apparently greeted with a nine-minute standing ovation by members of her Christian Democratic Union.

If that was the good news, the bad news arrived 48 hours later: a grim report that the conflict in Syria has led to “the largest refugee crisis of our time, with colossal human, economic and social costs for the refugees, host countries and host communities,” according to a new study released Dec 16 by the World Bank Group and the Office of the UN High Commissioner for Refugees (UNHCR).

The nearly 1.7 million Syrians who are registered in neighbouring Jordan and Lebanon live in precarious circumstances– notwithstanding the generosity of hosting governments.

“Refugees have few legal rights, and face constrained access to public services due to unprecedented demand. The vast majority of these refugees live on the margins, in urban or peri-urban areas, many in informal settlements, rather than in refugee camps.”

The plight of the refugees is dire and the lives and dignity of millions is at stake, declared the joint study.

Nearly nine in ten registered Syrian refugees living in Jordan are either poor or expected to be in the near future.

The crisis has had effects that go beyond the Middle East as desperate refugees are starting to move to Europe and beyond, the study warned.

“We have a collective responsibility to respond to the humanitarian and development crises unfolding in the Middle East and to act on the immediate consequences as well as on the underlying causes of conflict,” said Hafez M. H. Ghanem, World Bank’s Vice President for Middle East and North Africa Region.

But despite Germany’s generosity, there is still lingering opposition to the concept of open borders to refugees, who also include asylum seekers from Iraq, Libya and Afghanistan.

Frans Timmermans, first vice president of the European Commission, told a news conference in Strasbourg, France, Tuesday: “The borders that migrants cross are not just Greek borders or Bulgarian borders – they are European borders.”

Such borders are a collective responsibility, he said, and added: “if we don’t protect them in the right way, the consequences will be for all Europeans.”

Still there is widespread criticism of the negative responses both from Eastern European countries and the rich Arab Gulf nations.

Asked whether Secretary-General Ban Ki-moon is disappointed that Gulf states and Asian countries have not offered to host refugees, UN deputy spokesperson Farhan Haq said: “Well, you’ll have seen the offers as they come in. It’s still not really enough by our standards.”

He said there’s still a lot more that needs to be done to accept Syrian refugees, but the UN is appreciative of the offers that have gradually been coming in from countries in the Western world, in the region and around.

“But, ultimately, in order to lower the burden on countries like Turkey, like Jordan, like Lebanon, we’ll need other countries to step up and do more.”

Asked specifically about the Gulf countries, he said there’s been some slight movement in different areas, “but it’s still not at the level that we need to actually ease the burden on the countries in the region.”

He also said Saudi aid to the Syrian people had reached about 700 million dollars, according to the Third International Humanitarian Pledging Conference for Syria, held in Kuwait last March.

Still the irony of the crisis was best reflected in a cartoon where Merkel appeals to King Salman of Saudi Arabia, one of the richest countries in the Gulf, to allow some of the migrants to settle in his kingdom.

“Don’t worry Ms Merkel,” King Salman is quoted as saying, “you can take all the refugees – and we will build 200 mosques for them in Germany.”

According to the Lebanese newspaper Al Diyar, Saudi Arabia has vowed to build one mosque for every 100 refugees entering Germany.

‘No, it is more than cynical,” he added as an afterthought.

“This is no Muslim Brotherhood. Where is the solidarity in the Arab world?’ he asked.

The United Nations: “The Crisis for Syrian Migrants”