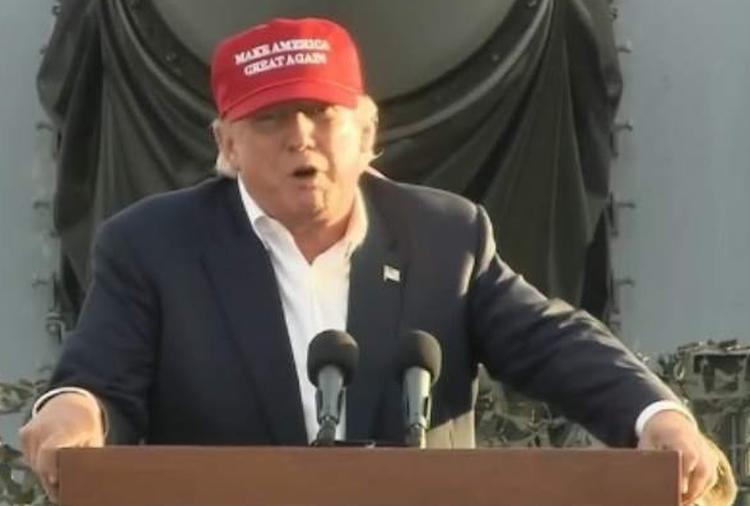 There’s a bipartisan effort to justify the killing of civilians in the “war on terrorism.”

There has been a lot of consternation expressed in the media at a series of statements by Republican presidential candidates during their most recent debate and elsewhere in which a number of them appeared to be advocating the large-scale killing of civilians through aerial bombardment as a legitimate means of defeating the so-called “Islamic State.” (ISIS or IS)

These statements did not simply rationalize military operations that result in large numbers of civilian deaths, which politicians in both parties have supported for decades, but actually advocate the killing of civilians as a legitimate tactic in counter-terrorism warfare.

Let’s put aside for a moment the irony of killing innocent people as a means of fighting a terrorist group that kills innocent people and the fact that it would result in blowback that would almost certainly increase the threat of terrorist attacks against the United States. Such operations would constitute a flagrant violation of the Fourth Geneva Convention and other principles of international law to which the United States, like all governments and armed groups, is legally bound.

Yet the three leading Republican candidates for president are not bothered about that. Donald Trump has called on killing families of terrorist suspects. Ted Cruz has called on “carpet bombing” Syrian cities controlled by IS and see if “sand can glow in the dark.” When moderator Hugh Hewitt asked Ben Carson, “So you are OK with the deaths of thousands of innocent children and civilians?” he responded, “You got it. You got it.”

Governor Jeb Bush, a supposedly moderate voice in the debate, underscored Republican hostility to international humanitarian law in his criticism of the Obama administration’s failure to take more aggressive action in civilian-populated areas, saying they should “get the lawyers off the backs of the fighting forces.”

Although more liberal commentators have expressed appropriate outrage at such remarks, they have failed to note that, for a number of years now, prominent Democrats have also been advocating these very dangerous ideas as well, with Democratic leaders also defending the large-scale killing of civilians in the name of “fighting terrorism.”

Among the most outspoken Democrats who have defended the killing of civilians in areas controlled by terrorist groups, exonerated those responsible for specific war crimes, and advocated the effective rewriting of international humanitarian law to legitimize the killing of civilians has been former senator and secretary of state Hillary Clinton, the frontrunner for the 2016 Democratic presidential nomination.

For example, in response to concerns raised by Israeli and international human rights groups about the nearly 1,500 civilians killed by Israeli forces during the 2014 war on the Gaza Strip, Hillary Clinton insisted, “I think Israel did what it had to do to respond to Hamas rockets.” When pressed further about civilian casualties, she replied, “Israel has a right to defend itself,” implying that she believed that attacks on civilians somehow constituted legitimate self-defense.

When Israeli forces attacked a UN school housing refugees in the Gaza Strip in July 2014, killing dozens of civilians, Senator Bernie Sanders (I-VT) condemned it and the U.S. State Department issued a statement saying that it was “appalled” by the “disgraceful” shelling. By contrast, Hillary Clinton—when asked about the attack during an interview with The Atlantic—refused to criticize the massacre, saying, “[I]t’s impossible to know what happens in the fog of war.” Though investigators found no evidence of Hamas equipment or military activity anywhere near the school, Clinton falsely alleged that Hamas was firing rockets from an annex to the school.

More tellingly, she appeared to argue that since Hamas had been firing rockets into civilian-populated areas of Israel, the Israeli government was not legally or morally culpable for their killing of Palestinian civilians, claiming that “the ultimate responsibility” for the deaths at the school “has to rest on Hamas and the decisions it made.”

In reality, however wrong Hamas has been in firing rockets into Israel, such actions simply do not absolve Israel of its responsibility under international humanitarian law for the far greater civilian deaths its armed forces have inflicted on Palestinians in Gaza. Indeed, it has long been a principle of Western jurisprudence that someone who is the proximate cause of a crime cannot claim innocence simply because of the influence of another party. For example, if someone starts a bar fight and a person ends up shooting him and a group of innocent bystanders, the shooter cannot claim innocence because the other guy initiated the conflict.

Yet the front-runner for the Democratic presidential nomination has repeatedly defended Israeli military campaigns that have resulted in the deaths of more 4000 Lebanese and Palestinian civilians during the past fifteen years in the name of “self-defense” against “terrorism,” criticizing findings by human rights monitors, international jurists, and investigative journalists—as well as by Israeli veterans’ and human rights organizations–demonstrating otherwise as being “flawed” and “biased.”

Meanwhile, on Capitol Hill, there has been a bipartisan effort to redefine international humanitarian law to justify the large-scale killing of civilians. For example, recent years have seen a series of resolutions passed by lopsided bipartisan majorities defending Israel’s attacks on civilian areas in the Gaza Strip, the West Bank, and Lebanon that have attempted to exonerate the U.S.-backed Israeli armed forces for the thousands of civilian casualties—which have greatly outnumbered military casualties—by claiming that the Arab militia groups were using “human shields.”

International humanitarian law defines “human shields” as the deliberate use of civilians to deter attacks on one’s troops or military objects. Investigations by Human Rights Watch, Amnesty International, the United Nations Human Rights Council, the U.S. Army War College, and others have failed to find a single documented case of any civilian deaths caused by Hamas, Hezbollah, or other Arab militant groups using human shields while fighting Israeli forces. These investigations have documented other war crimes by these groups, including not taking all necessary steps it should to prevent civilian casualties when it positions fighters and armaments too close to concentrations of civilians. However, this is not the same thing as deliberately using civilians as shields.

As a result, a 2009 resolution drawn up by House Democratic leader Nancy Pelosi attempted to exonerate Israel for the hundreds of civilian deaths inflicted by its armed forces by redefining what constitutes human shields. The resolution called on the international community “to condemn Hamas for deliberately embedding its fighters, leaders and weapons in private homes, schools, mosques, hospitals and otherwise using Palestinian civilians as human shields.”

However, the fact that a Hamas leader lives in his own private home, attends a neighborhood mosque, and seeks admittance to a local hospital does not constitute “embedding” them for the purpose of “using Palestinians as human shields.” Indeed, the vast majority of leaders of most governments and political parties live in private homes in civilian neighborhoods, go to local houses of worship, and check into hospitals when sick or injured, along with ordinary civilians. Furthermore, given that the armed wing of Hamas is a militia rather than a standing army, virtually all of its fighters live in private homes and go to neighborhood mosques and local hospitals.

In short, this resolution—passed by an overwhelming 390-5 vote—puts both political parties on record advancing a radical and dangerous reinterpretation of international humanitarian law that would allow virtually any country with superior air power or long-range artillery to get away with war crimes. In the eyes of both Republicans and Democrats in Congress, the Hamas-controlled Gaza Strip, the IS-controlled city of Raqqa, or other urban areas controlled by recognized terrorist organizations should be considered a free-fire zone.

What neither Republican nor Democratic leaders have acknowledged, however, is that even if a terrorist group was using human shields in the narrower legal definition of the term, it still does not absolve armed forces from their obligation to avoid civilian casualties. Protocol I of the Fourth Geneva Convention makes clear that even if one side is shielding itself behind civilians, such a violation “shall not release the Parties to the conflict from their legal obligations with respect to the civilian population and civilians.”

For example, if a botched bank robbery resulted in the robbers holding bank personnel and customers hostage and firing at police from inside the building, it still would not be legitimate for a SWAT team to kill the hostages as well because they were being used as “human shields.”

These efforts by Hillary Clinton and congressional leaders to both broaden the definition of human shields and legitimize the killing of civilians as a response is quite troubling, especially at a time of the growing militarization of police here in the United States and the increasing concerns over their use of excessive force against unarmed civilians. It also serves as a troubling reminder that comments like those heard in the Republican debate and elsewhere are becoming more acceptable among political leaders of both parties.

Indeed, a House-passed resolution in July 2014 absolving Israel for responsibility for the large-scale civilian causalities inflicted by its armed forces in the Gaza Strip, due to the alleged use of human shields by Hamas, also declared (correctly in these cases) that “Al-Qaeda, Al-Shabaab, Islamic State of Iraq and the Levant (ISIL) and other foreign terrorist organizations typically use innocent civilians as human shields.” The inclusion of that clause in a resolution defending the killing of civilians under such circumstances appears to have been designed to pave the way for just the kind of military onslaught on civilian areas of Syria and Iraq that the Republican candidates have in mind.

Stephen Zunes is a professor of politics and coordinator of Middle Eastern Studies at the University of San Francisco.