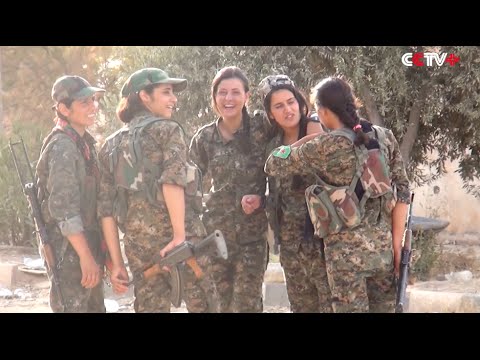 The US may be tempted to congratulate itself for wrangling Russia to the table for today’s meeting on Syria’s peace talks. Yet an indispensable party is missing: Syrian women.

Today, we face the prospect of a Middle East peace conference with disappointment at its delay and frustration that, yet again, negotiators embrace a framework that ignores the origins of the revolution and gives credence only to men with guns.

Watching the spectacle of governments maneuvering for a place at the negotiating table, one has to ask: where are the women who started this revolution? The reality in Syria today is radically different from March 2011, when young women and men across Syria united in peaceful demonstrations against Bashar al-Assad’s regime. Since then, the country has fractured, with ISIL controlling large swaths of territory across Syria and Iraq; Kurdish forces securing the north and pockets of control scattered between different militias and rebel groups. The conflict has left over 6 million people displaced, over three-quarters of a million refugees pushing into Europe and thousands dying along the way.

Women who organized during the uprising are serving as local peacebuilders in the conflict. For example, to the north in ISIL-controlled Deir Ezzor and the government-controlled Al-Hasaka, women are working to prevent the recruitment of child soldiers and small arms proliferation. In the contested city if Idlib women have organized discussion workshops on the links between Islamic principles and democracy. In Damascus, women are advocating for peace processes to include the political solutions laid out in the Geneva I Communiqué.

And they’re talking with each other. Last month MADRE, the Women’s International League for Peace and Freedom (WILPF), and CUNY Law School organized a second Strategies for Change convening that brought together women’s rights advocates from across Iraq and Syria. Together, they are calling on the international community to include Syrian women in the peace talks scheduled for next year.

Given that accords are often more successful and peace more likely to prevail when women are included, it’s baffling that women remain the largest group of stakeholders regularly excluded from official peace negotiations. It’s also illegal under international law. So why are women being left out? In December, Steffan de Mistura, the Special Envoy for Syria said, “Women’s leadership and participation in conflict resolution are critical for sustainable solutions. The engagement of women in shaping the future of Syria is more important now than ever before.”

With only “soft” commitments given by the UN, women peacebuilders who have long demonstrated willingness and capacity to participate in talks have not received any guarantees they will be included in the upcoming process.

Exclusion from negotiations – whether based on religion, ethnicity, gender, or some other protected class – is undemocratic and only fuels instability and conflict renewal. With the threat of new talks being run aground by uncompromising parties and state self-interest, there is nothing to lose and much to gain from the potent addition of women to the talks.

Peace treaties without women don’t work. This was true for the demilitarized zone of El Caguan, Colombia, where experts repeatedly cite the lack of women’s participation as the key reason for years of failed peace talks. The same was true for peace accords in Bosnia and Herzegovina, which should be chastening enough: no women and no civil society members were permitted near the negotiations. Only warlords were invited. Unsurprisingly, that peace agreement institutionalized a permanent state of ethnic division in an impossible constitution. The result has been economic devastation, absence of human rights, and, according to the United Nations, a strong possibility of renewed conflict. Post-conflict experience teaches us that when women are excluded from peace negotiations, political solutions readily collapse. At minimum, accords without women reflect the interests of the most powerful, failing to create sustainable measures to protect those most affected.

Peace agreements should not only be about an end to fighting but also about creating conditions where people can thrive and societies can flourish. At the very least, such accords should ensure conditions in which actors aren’t driven to take up arms again. Where women have been included in peacebuilding, they have built bridges across parties and issues while meaningfully involving civil society in solutions that promote social change. For example, in Northern Ireland, women peacebuilders successfully united activists across political and religious divides. In Sudan, women led demands for the inclusion of social and economic relief into the final peace agreement.

As we wait for negotiations, the violence will continue and the encroaching winter will bring thousands of more deaths. Those dying will be the most vulnerable, those involuntarily trapped between fighting factions, and those whom humanitarian aid fails to reach. Yet, local peace organizers are not invited to the anticipated talks, as if to signal that their stake in their own future and the future of their country is somehow less important than men with guns.

Despite this dismissive treatment, Syrian women continue to organize to make their voices heard and to convey the message that there are ways to peace. As the international community takes tentative steps towards Syrian peace talks, why not try something that’s age-tested and consistently proven to work? It’s time to bring women to the table. And leaders like John Kerry should take note. Syrian women are not just waiting to be included: they are demanding it.

CCTV: “Young Kurdish Women on Front Line against IS in Syria”