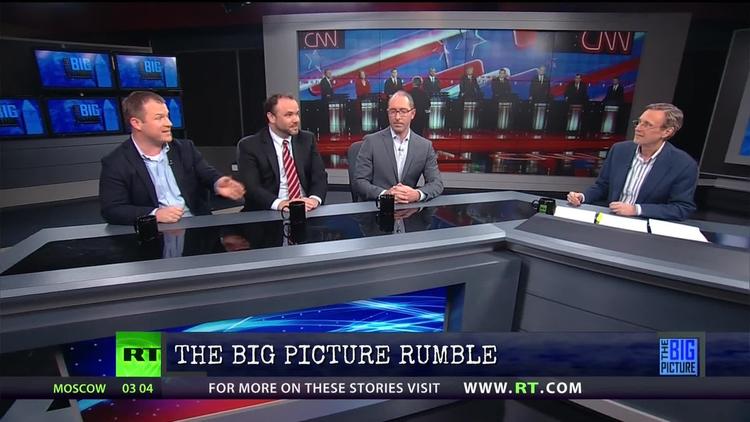 As a U.S. Marine veteran who was deployed to Iraq in 2003, I can’t even begin to describe the disgust I felt while watching the GOP debate [last week]. Presidential candidate after presidential candidate attempted to one-up each other by highlighting how tough they would be as future commanders in chief. Each solution they presented demonstrated what little regard they had for the loss of life, and how quick they would be to resort to acts most often referred to as war crimes.

The debate reached its height of callousness when Ben Carson, once a pediatric neurosurgeon of some repute, was asked if he was “OK with the deaths of thousands of innocent children and civilians.” He responded with “You got it.” The irony of a person who formerly devoted his career to saving children’s lives and is now so willing to commit to actions that would result in the deaths of thousands of children in order to showcase his mettle is hard to ignore.

Let me make something clear: no one on that stage has experienced war. None of those candidates have to relive the memories and traumas of participating in war. And not one shares the intimate loss and grief endured by the death of hundreds of thousands of civilians and service members. And yet, carpet bombing, targeting of civilians, opposing democratic movements, and murdering families as retaliation were all openly suggested as potential strategies in the never-ending wars that began with the Bush administration and have continued throughout Obama’s presidency.

Serving in the invasion and occupation of Iraq has made me question the motivations of any elected leader that casually mentions war as a quick and easy option. My time in Iraq was anything but easy. During the dozens of resupply missions my unit was tasked with, we were exposed to the devastation that the invasion had left inside of Iraq. Trucks, cars, tanks, countless buildings scarred with battle damage.

On each successive resupply run, we watched as the faces of children on the side of the roads changed from open and curious to eventually withdrawn and fearful. I saw children that were so happy and so filled with life, and we were the ones taking that away from them. You won’t hear this from any of the candidates promoting more war. You won’t hear about the impact war has had on the people actually living in Iraq, Syria or Afghanistan.

It is also telling what else was not discussed during the debate. While the candidates all seemed perfectly willing to sacrifice yet another generation to pointless wars all in a shameless attempt to increase their place in the polls, they failed to mention the cost of such belligerence. The term “PTSD” wasn’t uttered once during the debate, nor was “Traumatic Brain Injury,” or “Suicide.” The word veteran? Mentioned only once. The reality is that the impact of the war stays with me, and with countless veterans who are returning home traumatized, with as many as 22 veterans a day resorting to suicide as a solution.

Watching the GOP debate on Tuesday gave me an opportunity to reflect on what I took part in and the journey I’ve traveled to come to a place of dedicating my life to make things right. I wish our country would learn some of the lessons that I did instead of perpetuating the same mistakes repeatedly. The sideshow that many of us watched on Tuesday night was only the most recent egregious example of how irresponsible the national dialogue around our foreign policy has become. We, as people responsible for electing the next commander in chief, need to take a good hard look at who we are bringing into office because, let’s be honest: this isn’t a problem confined to only the Republican Party. This is a bipartisan failure. We need to ask ourselves if the candidate that we choose to elect is going to offer us more of the same or break us out of this deadly cycle.

RT The Big Picture: “The GOP’s Path to the Dark Side”