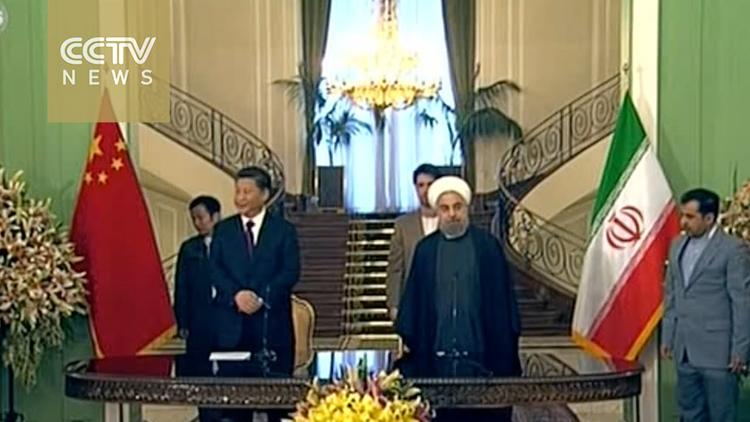 “The government and people of Iran have always looked and are still looking for expanding relations with independent and trustworthy countries like China and on this basis, the agreement between the presidents of Iran and China for the establishment of a 25-year strategic relation is completely correct and wise.”

“. . . The Islamic Republic of Iran will never forget China’s cooperation during the time of sanctions.”

Referring to the US influence over countries like Saudi Arabia, Khamenei told China that “Iran is the only independent country in the region that can be trusted in the area of energy because unlike many regional countries, the energy policy of Iran is not influenced by any non-Iranian factor.”

Referring to US exploitation of weaker countries, Khamenei said, “This situation has caused independent countries to pursue more cooperation with one another. The agreement between Iran and China for developing a 25-year strategic relation is within this framework. With the serious follow-up by both sides, agreements will definitely pass through the stage of implementation.”

He added, “Westerners have never been able to win the Iranian nation’s trust,” saying that the US was more hostile than the others. He said, “These hostile policies have caused the people of Iran and the officials of our country to look for developing relations with independent countries.”

Khamenei asked for Chinese help against Daesh (ISIL, ISIS), saying, “Unfortunately, our region has become insecure because of the wrong policies of westerners and also because of a deviant and wrong interpretation of Islam. There is a danger that this will be expanded and developed and therefore, it should be prevented with intelligent cooperation.”

Xi Jinping replied that “The mutual cooperation between Iran and China should increase – day by day – on the basis of mutual interests.”

Referring to the historic Silk Road, Xi said, “By increasing their cooperation, the countries who are located on this route can defend their interests and achieve their goals in the face of the American model for disturbing the balance of the regional economy.” He added, “Some superpowers are trying to create a monopoly and to impose the law of the jungle where “[Y]ou are either with us or with our enemy” play a dominant role, but the progress of emerging economies has taken away the monopoly of power from their hands and it has created a suitable environment for the ideas and policies of independent governments.”

The Chinese president said, “After the lifting of sanctions too, we should increase our cooperation in all areas.” He added, speaking of Iran’s petroleum and natural gas and its literate workforce, “Iran and China’s economy complement each other. On this trip, we have reached an agreement about formulating a plan for a 25-year strategic cooperation and we are ready to increase and deepen our cooperation in cultural, educational, technological, military and security areas as strategic partners.”

Khamenei’s site said that Xi “stated that in the face of terrorism and the complex issues of the region, it is necessary to find a way to increase cooperation between the two countries in the area of security.”

The ‘Strategic Partnership’ between China and Iran consists of 20 articles; here are some of the more central ones:

The ministry of foreign affairs of both countries will hold annual meetings.

The two countries recognized each other’s emphasis on national sovereignty and independence.

They will increase their scientific and academic exchanges.

They will cooperate on counter-terrorism.

The ending of international, UN-backed sanctions, and the continued sanctions imposed by the US Congress, gives Xi an ‘in’ with businesses in Iran.