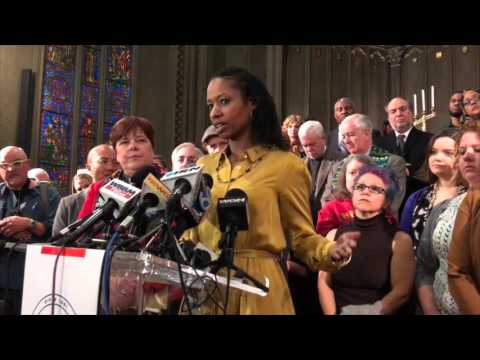 Wheaton found itself the object of attention when many interpreted Dr. Hawkins’ actions as endorsing Islam, creating what Time magazine termed a “public relations disaster.” Wheaton’s leadership felt pressured to take action, with its Provost stating “We are being asked to defend why we have faculty openly rejecting with (sic) the institution stands for.”

Because Wheaton is a leader in the Evangelical community, the effects of its treatment of Dr. Hawkins spread far beyond its campus. Evangelicals are the country’s largest religious group, so we should judge Wheaton not solely as an academic institution, but as a significant voice in American religious and cultural life.

Many Evangelicals are distinctive in the degree to which they see the world through the lens of an American-led struggle against Islam. In church, in the military, on the battlefield, in the voting booth and in Congress, Evangelicals embrace war like no other American religious group (a notable exception are Evangelical African-Americans, whose sociopolitical views by and large differ from their white counterparts). For tens of millions of Evangelical Americans, war is not an aberration of the divine will on Earth but its fulfillment.

At least 40% of white Evangelicals hold hardline foreign policy views, a striking figure among Americans. Compared to other religious groups, Evangelicals are the country’s biggest supporters of torture. For some years political scientists have been reporting that Evangelical doctrine is strongly associated with militarism, meaning Evangelicals believe war to be moral and that the U.S. government should be aggressive in pursuing it.

Lieutenant Colonel James E. Parco, Retired, has documented the United States Air Force Academy’s ongoing problems with fundamentalist Evangelicals pushing a culture of proselytization onto its cadets, abetted by the Academy’s most senior leadership. The Military Freedom Foundation, headed by Michael L. Weinstein, fights vigorously against the incursion of Evangelical doctrine and practice into the U.S. armed forces, including Bible verses on weapons, crusader imagery on U.S. military insignias, and military personnel proselytizing to Muslims in Iraq and Afghanistan.

Evangelicals are motivated to evangelize to the military for a myriad of reasons. Using the military to advance Evangelical Christianity worldwide is one of them. The 1992 book “Ministry With the Military”, used to this day to train military chaplains, observes “An enthused Christian service member can take the Gospel around the world and at the government‘s expense.” Weinstein’s Military Freedom Foundation has been battling the Evangelical quest for “government paid missionaries” for years.

A striking expression Shoemaker observed is “Honor the two who died for you: Jesus and the American Soldier.” As Shoemaker notes, the expression embodies the idea that because “Christians believe that Jesus was the ultimate sacrifice, soldiers are seen as mimicking the very last acts of Jesus himself.”

The fusion of God and war that Shoemaker observed is far from limited to Kentucky. The group Cru (Campus Crusade for Christ) believes “God has used the militaries of the world to strategically spread the gospel and accomplish His purposes”. Claiming God uses war to spread Christianity advances far beyond merely supporting the troops, and is a stunning indicator of how militarism has become mainstream in Evangelical thought.

Given the militaristic nationalism of many Evangelicals, it should be no surprise that they passionately fight back against Weinstein’s quest for religious freedom in the American military. Weinstein is a military man from a military family, but that does not stop him and his wife receiving voluminous hate-mail from extremist Evangelicals. A “spirit-filled ordained pastor of The Gospel from the great state of Nebraska” told Weinstein “We pray as one for you to die tonight in your sleep leaving a bloody mess for your family to find at daybreak.”

Which brings us back to Dr. Hawkins’ struggles. Dr. Hawkins is coordinator of a modest Peace and Conflict Studies

Two items stand out in the Wheaton administration’s reasoning when it initially confronted Dr. Hawkins. First, the administration’s December 15 memo to Dr. Hawkins obsesses over difference when pondering Evangelical Christianity’s place in the religious universe. In it, Wheaton’s Provost demands she go so far as to prove she has not blasphemed for failing to sufficiently differentiate Christian and Islamic worship. Commenting on the conflict when it first erupted onto the national stage, Professor Denny Burk of Southern Baptist Theological Seminary also stressed the contrast, arguing Christians and Muslims are “people of the book, but our books are very different.” That Dr. Burk’s off-the-cuff remarks so closely echo the Wheaton Provost’s more formal thoughts in this respect is revealing. Second, both Wheaton’s Provost and Dr. Burk propound the idea that Christianity is “unique” (read: exceptional) in one way or another. The memo argues Dr. Hawkins’ discussion of the Eucharist does not acknowledge the fundamentally unique way Christians celebrate Christ’s sacrifice. Singing from the same hymnal, Dr. Burk proclaimed “The Bible is witnessing to Jesus Christ, the son of God. That’s unique of all the world religions.”

In aggregate, white American Evangelicals are notable for being right-wing authoritarians and for another attitude social psychologists identify, called social dominance orientation, which focuses on the preference for hierarchical social organization. Right-wing authoritarianism and social dominance orientation are both strongly associated with supporting war—for the former as an act of collective security, and for the latter as an aggressive method to gain exploitative advantages.

The Wheaton administrators’ sin is not that they score highly on measures devised by social psychologists to measure authoritarianism and hierarchy. Their fundamental sin is closing themselves to grace, and it is this sin that eventually culminates in violence and war.

Evangelical Christians have a right to their beliefs and to their self-definition as different from others. But in imagining themselves to be God’s only true witnesses, they are spiritually sealing themselves off from the rest of the religious world. The Wheaton administrators’ rejection of Dr. Hawkins’ theological stance is a rejection of the world Islam inhabits.

Wheaton is an academically distinguished university with many excellent faculty who strive to realize a more just and peaceful world. And, evangelicals are diverse—- Wheaton College is not the same as Liberty University, for instance. The problem is not Wheaton per se, but its administration’s rejection of Muslims. It risks playing into a hardline Evangelical position that the very presence of Muslims in the world is the source of evil in it..

In contrast, Dr. Hawkins loves Muslims as Muslims, not as mere subjects of conversion, and accepts the love of Muslims in return. In her solidarity with Muslims, as an Evangelical, Dr. Hawkins is onto something good.