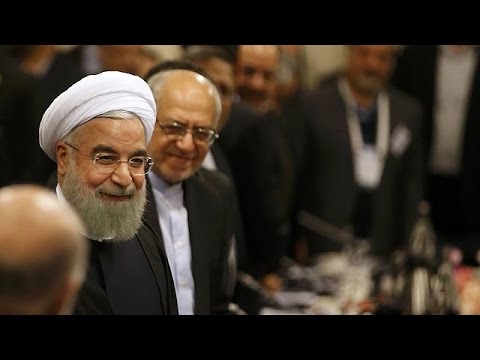 Virtually as soon as the Iran nuclear deal was finally approved by the UN Security Council, Iranian President Hassan Rouhani headed for Europe. He met first with Italian Prime Minister Matteo Rinzi and with Pope Francis. Now he is in Paris at the invitation of President Francois Hollande.

Rouhani is trying to make economic deals, but his tour has a strong diplomatic element, as is revealed by the communique issued by Italy and Iran. The communique calls for bilateral cooperation in:

“supporting the UN-sponsored political process and intra-Syrian dialogue toward a peaceful solution to the conflict in Syria;

continuing the fight against Daesh and affiliated terrorist groups, while supporting the Government of Iraq in its efforts to advance governance and national reconciliation;”

These passages underline the ways in which Iran is now seen as increasingly an important partner for Europe, not only economically, but also strategically. Shiite Iran is positioned as the most effective bulwark against Daesh (ISIS, ISIL). It is also seen as a power broker in Iraq and Lebanon, both countries important to Italy.

“E’temad [reformist]: “President Hassan Rouhani’s meeting with Pope Francis, as well as Tehran’s increased interactions with the Vatican, is a natural and obvious move as they are two religious poles in the world.

“But, currently these relations can lead to different outcomes. On the one hand, the Islamic Republic of Iran as a religious and Muslim government is seeking to increase its international prestige and international legitimacy.

“On the other hand, the Middle East is facing an unprecedented number of conflicts within which terrorist groups, under the flag of religion, have destabilised countries in the region and spread their violence to the heart of Europe. So we can say that all the monotheistic religions are suffering from the plague of ‘terrorism’ and treating this plague will not be possible without dialogue and more interaction between the religions.

“Therefore, the 11th government’s decision to interact with monotheistic religions is a clever move that can improve Iran’s anti-terrorism policy in the regional and the international arena.” (Commentary by Karen Khanlari headlined: “Coalition with the world’s theists against terrorism”)

So on both the European and Iranian sides, the chance for trade is welcomed, especially given the slowdown in the world economy. But at the same time, Iran’s potential as an anti-Daesh, anti-terrorism force is being prized.

These themes, of counter-terrorism and trade, continued to be salient as Rouhani landed in Paris. He met with 20 CEOs and with President Hollande. Iran is angling to by over 100 airbus civilian airliners, and Hollande is eager to facilitate the sale. Automakers Renault and Peugot are also seeking Iran deals.

It seems clear that for European business, the end of sanctions on Iran is creating a potential business bonanza. But diplomatically, Iran’s ability to gradually defeat and roll back Daesh is part of the equation of partnership.