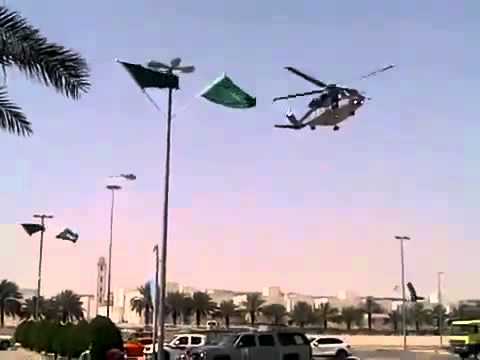 An extremist ‘hero’ with a mortar in his shoulder. A secret plot bringing the Iraqi Kurdish and the Islamic State together. Iraqi social media can prove it all. Or can it?

After the recent execution of a leading Shiite Muslim cleric with pro-democracy views, Sheikh Nimr al-Nimr, in Saudi Arabia, there was widespread outrage in Shiite Muslim communities across the Middle East.

As the British Guardian newspaper reported, “the execution was described as a ‘grave mistake’ by the Supreme Islamic Shia Council in Lebanon and a ‘flagrant violation of human rights’ by Yemen’s Houthi movement.”

There was a similar reaction in Iraq, with protests organized in Baghdad. And there was an equal amount of outrage – if not more – being expressed on Iraqi social media. A video was shared that allegedly showed the last seconds of Nimr’s life and his execution. Another video was widely shared: It showed Nimr’s body being dropped out of a helicopter after the execution. Some Iraqis even said they thought that he hadn’t been executed in a humane way at all, he had actually been killed by being thrown out of that helicopter.

This kind of “news” is common on Iraqi social media. And it’s dangerous because for many Iraqis, social media websites, like Facebook, Twitter, YouTube and Instagram to a lesser degree, have become a major source of political and security-related news. They do not trust mainstream media in Iraq, which is mostly considered to be partisan with much of it funded by political parties, religious bodies or other organizations pushing their own agenda. Many Iraqis say their most trusted source is word-of-mouth – relatives, friends, neighbours – so it makes sense that they would turn to social media, basically an expanded network of the latter, to get information they believe they can trust.

Thanks to the current security crisis in the country, started by the extremist group known as the Islamic State in June 2014, the situation on the ground often changes rapidly. The best place to get information on those changes, many Iraqis believe, is via social media.

However once again the country’s ingrained social divisions are playing a part on social media sites too. Manipulated videos, Photoshopped pictures and other false news and disturbing rumours are shared continuously by Iraqis craving information and, in some cases, anything that confirms their own bias. And because websites like Facebook and YouTube now play a key part in shaping Iraqi public opinion, these fake stories and visuals can be dangerous – and if not physically, dangerous, then certainly divisive in the long run, in an already worryingly and increasingly divided society.

Once a certain story gets picked up on Iraqi social media it is often rapidly disseminated further. The story about Sheikh Nimr’s execution was a prime example of this. It’s hard to know who posted the videos originally but it seems clear that the original user had an agenda.

Under the guidance of advisors from open source verification experts at the investigative network, Bellingcat, a team of bloggers from the Iraqi Network for Social Media who are also the founders of a Facebook page called Fake Posts, as well as journalists from NIQASH, took a closer look at some of these falsified reports on social media.

Using open source verification techniques like geolocation and reverse image search, the team quickly found that the first video, the one allegedly showing al-Nimr’s execution, had nothing to do with the Saudi cleric. The clip, watched by thousands of Iraqis, was actually the video of the execution of an Indonesian maid in Saudi Arabia and it was four years old.

The other video that supposedly showed al-Nimr’s body being thrown out of a helicopter after his execution was also something else: It was a video showing a member of Saudi police force falling out of a helicopter, most likely to his death, in 2013.

The investigators then went on to look at several other popular rumours doing the rounds of Iraqi social media.

Another picture that caused a different kind of uproar was that of a bloodied soldier with the remains of a mortar embedded in his arm, alive and sitting on bed. Interestingly enough every single group fighting in Iraq wanted to claim this “hero” as one of their own. The Iraqi Kurdish military, known as the Peshmerga, said he was one of their men. The Iraqi army claimed him as their soldier and then the Shiite Muslim volunteer militias, who may or may not fight alongside the Iraqi army, said he was one of their brave volunteers. Even the extremist Islamic State, or IS, group got in on the act saying he was actually one of their fighters.

People in Iraq want to believe this kind of story and they gave the soldier with the mortar in his arm nicknames like “Iron man” in honour of his survival.

But once again it turned out that nothing about this picture was correct. The man was in fact a soldier in the Colombian army in South America. The picture dated back to 2000 and the man had been injured while the Colombian army was fighting local left wing rebels, the Revolutionary Armed Forces of Colombia, also known as Farc.

Details on the remains of the mortar in the man’s arm, words on his badge saying Quimbaya, his military rank and other news reports on the incident quickly made it clear that the soldier had nothing to do with Iraq at all.

Another controversy was caused by a picture that seemed to show an officer from the Iraqi Kurdish military consorting with members of the IS group, a force that the Iraqi Kurdish are supposed to be fighting. Back in 2014, when the IS group first took over the northern city of Mosul, there were already rumours that the Iraqi Kurdish were cooperating with the group in order to gain advantage and move toward a long-cherished goal of Kurdish independence. No big surprise then that this picture of supposed enemies together rebirthed those rumours in the echo chamber that is Iraqi social media.

Once again though, this was misinformation. The individual that looked like they were a member of the IS group – sporting a long beard and a typical long-shirted IS outfit – turned out to be a well known Iraqi Kurdish actor. The actor was well known in Iraqi Kurdistan but not by Arab audiences in Iraq. He was in an area west of Mosul working on a film about how the IS group had attacked the Yazidi minority in northern Iraq. And the member of the Iraqi Kurdish military pictured with the actor was a real soldier, a member of the security task force assigned to protect the film crew and actors.

It seemed that the picture had been taken as a kind of celebrity souvenir and uploaded in that vein, but had then been taken out of context by those who didn’t recognize the Kurdish actor and who had suspicions about the Iraqi Kurdish military.

“Thanks to advances in digital technology these kinds of rumours are increasingly common in Iraq,” says Amir Faysal, a professor in the media studies department of Baghdad University. “This allows people to publish whatever they like without checking if it’s true. There is a strong need to increase Iraqis’ awareness of this, so that they can tell what is true and what is false – these false rumours negatively affect public opinion,” he told NIQASH.

One of the biggest problems with all of this is that it is not just ordinary Iraqis on social media spreading rumours and gossip. The Iraqi media often also engages in disseminating these kinds of stories – part of the drive for them is to increase audience share and get more visitors to their sites. They know these controversial reports will do that. For some of the less scrupulous, more partisan media outlets, the false stories may also support their organisation’s agenda.

Digital content that sets one sect, or ethnic group, against another in Iraq is seen as popular, a bit like the populist muck raking done by tabloids in the West; it often spreads very quickly – which makes even more professional news outlets want to re-publish or comment on it.

“The best way to confront this kind of news is to better train Iraqi journalists,” suggests Hashim Hassan al-Tamimi, Dean of the College of Mass Communication at the University of Baghdad. “Iraqis urgently want news about security and about politics. The real media should be able to provide them with this information, instead of allowing rumours on social media to incite hatred.”

This report was prepared by NIQASH in cooperation with Bellingcat, the Media Academy Iraq and Iraqi members of the Fake Posts page. It is the first of an occasional series, that will see NIQASH cooperate with the Fake Posts team.