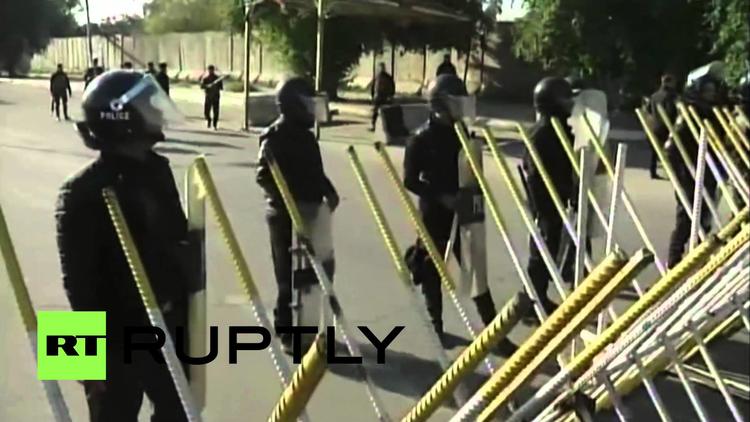 Saudi Arabia’s execution on Saturday of prominent Shiite cleric Nimr Baqir al-Nimr has so far not created a crisis between Riyadh and the Shiite-dominated Baghdad government. But Saudi Arabia’s name with the rank and file Shiites and parliamentary backbenchers is mud.

On Tuesday, thousands (or perhaps only hundreds) of demonstrators from the Muqtada al-Sadr bloc came out in front of the walled-in Green Zone to demand that the Saudi embassy be closed. Alarmed, al-Jubeir called his counterpart, expressing fears that the mission might be overwhelmed by angry crowds. The Iraqi foreign minister, Ibrahim Jaafari, pledged to Riyadh that his government would protect the Saudi embassy. Contrary to some reports, it has not been attacked.

Although the Green Zone where most embassies are was opened to traffic this past fall, after having been an blast-wall-protected enclosure set up by the Americans in 2003, it can still presumably fairly easily be proofed against mob action.

Many Iraqi Shiites believe that Daesh (ISIS, ISIL) is bankrolled by the Saudi state, and they are furious at what they see as a hard line Wahhabi murder of a pious man of the cloth. Saudi spokesmen accused al-Nimr of plotting terrorism, but the actual legal charges against him seemed just to be a vague allegation that he was a trouble-maker.

Firdaws al-Awadi, a female member of parliament from the State of Law coalition of Prime Minister Haydar al-Abadi, lambasted the Iraqi foreign ministry for not having condemned al-Nimr’s execution. She said that the Saudi embassy in Baghdad (recently opened after a 25-year hiatus that began under Saddam Hussein) is an espionage operation on behalf of Daesh, and that closing it would deal a painful blow to the terrorist organization’s intelligence in the country. Note that this is not a Sadrist speaking, it is a member of the mainstream Da’wa Party to which the prime minister belongs.

The Sadrist demonstrations don’t seem to have been nearly as huge as al-Sadr had hoped for. The al-Abadi government is standing firm against closing the embassy. Despite the passions raging in the Shiite south over al-Nimr’s execution, for the moment Baghdad feels too vulnerable and isolated to cut off a major neighbor like Saudi Arabia. Indeed, there is now an opportunity for al-Abadi to be a go-between. Likewise, to the extent that al-Abadi needs Washington to polish off Daesh, after the US-backed victory in Ramadi last week, he will likely hearken to Washington’s advice on this matter, which will be to maintain diplomatic relations.

The question is whether the righteous anger of the Iraqi Shiites can be contained by their pragmatic and beleagured government.

Saudi Arabia was formed as a unified state in 1932 after militant Wahhabi armies conquered much of the Arabian Peninsula in the 1910s and 1920s. The Saudi king is supported by the Wahhabi clergy and vice versa, in an arrangement that goes back to the 18th century. Largely Shiite al-Hasa fell to the Wahhabis in 1913. The Wahhabi branch of Islam was originally technically neither Sunni nor Shiite, though it is now usually included among the Sunnis, and is the most hard line and theologically intolerant form of the religion. Wahhabism likely has about 4-8 million adherents out of the country’s 17-20 million citizens (a majority of Saudis outside the central province of Najd are likely traditional Sunnis, and 15% are Shiite). Wahhabi clerics have often viewed Shiite Muslims harshly, seeing their devotion to the family of the Prophet and their visitation at shrines as forms of idolatry (just as extreme Protestants might see folk Roman Catholicism, with its emphasis on Mary and on saints’ shrines, as idolatrous).

On top of the theological divisions, geopolitics has been layered. Iran is largely Shiite and since 1979 has emerged as a rival to Saudi Arabia and the promulgator of a (gulp) republican ideology that says there is no place for kings in Islam. Saudi Arabia and Iran are fighting for influence in Iraq, Syria, Bahrain and Lebanon, among other places (likely in Afghanistan as well). Saudi Arabia also maintains that its fight against the Houthi rebels in Yemen is somehow connected to Iran, but that is just a cover story.

It should be stressed that the Saudi-Iran relationship was not always theological or ideological and sometimes has been quite good. In the 1960s, both the shah of Iran and the Saudi monarchs were right wing, pro-capitalist, American allies, and they got along famously. King Faisal visited Tehran in 1966, Mohammad Reza Pahlavi, the Iranian monarch, visited Riyadh in 1975.

Likewise, less than a decade ago King Abdullah brought the Iranian president and foreign minister of Iran to Riyadh for consultations, apparently over the objections of his foreign minister, Saud al-Faisal. But even while the late King Abdullah was pursuing a diplomatic track, the wikileaks State Department cables show that Saudi Arabia’s ambassador in Washington, Adel al-Jubeir, was urging the Bush administration to bomb Iran.

King Abdullah, he of the wiser head, is deceased, and King Salman seems to share al-Jubeir’s anti-Iran fanaticism and paranoia.

The Saudi establishment was furious over the Bush administration’s installation of a Shiite-dominated government in Iraq in 2005, seeing it as a betrayal of the efforts in the Iran-Iraq war to contain Iranian influence in the region. Baghdad and Riyadh have had bad relations, especially under former prime minister Nuri al-Maliki, who was eased out of office at President Obama’s insistence after the fall of Mosul in summer of 2014. Under his successor, PM al-Abadi, a Saudi embassy was finally opened this September.