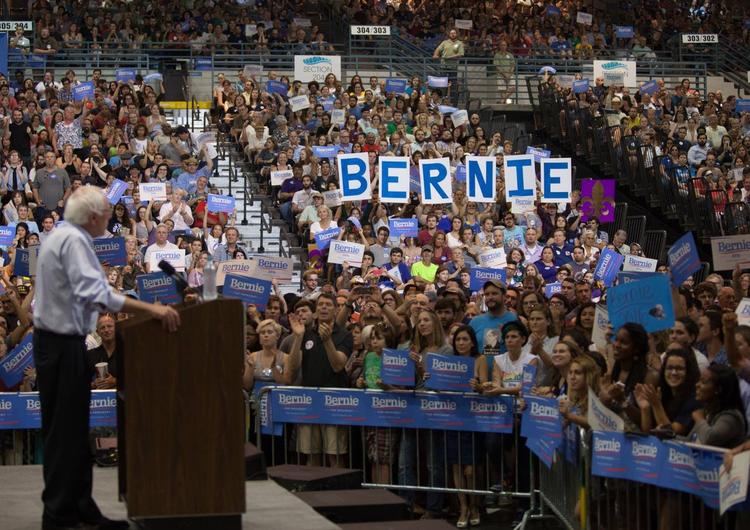 The Tyndall Report, a non-partisan media monitoring firm that has been tracking the nightly news broadcasts of ABC, CBS, and NBC, found that Trump is tromp, tromp, tromping over the airtime of everyone else.

From last January through November, these dominant flagship news shows devoted 234 minutes of prime-time coverage to the incessant chirping of the yellow-crested birdbrain, with no other contender getting even a fourth of that. Take Bernie Sanders, who’s stunning the political establishment with a fiery populist campaign that’s drawing record crowds. Indeed, Sanders’ upstart campaign is commanding a comparable share of support within the Democratic Party’s voting base to what Trump is enjoying from the Republican electorate.

And — get this — polls also show Bernie trouncing The Donald if they face each other in November’s presidential showdown. So surely he’s getting a proportional level of media coverage by the networks on our public airwaves, right?

Ha, just kidding! The big networks’ devotion of 234 minutes to all-things-Trump was “balanced” by less than 10 minutes for Sanders. Most egregious was ABC, the Disney-owned network. ABC’s World News Tonight awarded 81 minutes of national showtime to Trump last year — and for Bernie: 20 seconds.

How self-serving of the media moguls. The one candidate who is effectively rallying large numbers of voters to oppose the rise of corporate oligarchy — including in the media — has the plug pulled on him.

Of course, this only amplifies the truth of what Sanders is saying about the villainy of corporate profiteers, and it fuels a greater determination by his millions of grassroots supporters to end the reign of greed in America.

OtherWords columnist Jim Hightower is a radio commentator, writer, and public speaker. He’s also the editor of the populist newsletter, The Hightower Lowdown, and a member of the Public Citizen board. OtherWords.org