Donald Trump’s first presidential campaign ad pledged to “take their oil.” That’s what President (gasp) Trump would do after having “quickly cut the head off the Islamic State,” says the deep-voiced narrator.

Along with political decapitation, there are many disturbing things in the Republican front-runner’s commercials besides these three words. But stop and ponder the questions they raise.

First, the U.S. government lacks state-owned oil companies, the requisite drilling equipment, and a fleet of tankers. How would Trump “take their oil”?

He’d get around this inconvenience wrought by America’s capitalist system by giving ExxonMobil the job, and backing the corporation up with “a ring” of U.S. troops.

“You ever see these guys, how good they are, the great oil companies?” Trump crowed in Iowa in November. “They’ll rebuild that sucker, brand new — it’ll be beautiful.” (Exxon and its competitors aren’t “great” companies. They’re destroying the planet and are dangerous for investors. But let’s stick with those three words.)

Second, much of the territory the Islamic State controls today lies in oil-poor Syria. If a businessman-turned-president is going to deal with all the hassles that making our nation’s fifth-largest corporation an official agent of foreign policy would entail, why operate there?

Further, Syria faces a crisis so severe that babies are starving and the locals are eating cats and dogs to stay alive. Taking their oil would sow more instability and create more refugees. Doesn’t Trump see how bad snatching oil from the Islamic State’s survivors right after it falls would look?

Whether it’s out of humanitarian concern or propelled by the optics, shouldn’t the immediate post-ISIS U.S. mobilization focus on delivering aid and relief rather than further impoverishing the carpet-bombed populace?

Furthermore, the diplomatic conflict now brewing between Iran and Saudi Arabia may spiral into a regional war. Shouldn’t the Pentagon get out of the way instead of forming a “ring” around invasive oil rigs?

Finally, Uncle Sam can’t take oil that doesn’t lie below federal land without stealing it. How would swiping a commodity that belongs to other people foster stability in the Middle East and dial back the threat of “radical Islamic extremism,” three other words Trump likes to chant?

He’s also repeatedly criticized the U.S. government for not “taking” Iraq’s oil during Washington’s occupation, which began 13 years ago amid related oily delusions.

“The bulk of the funds for Iraq’s reconstruction will come from Iraqis,” notably including their oil revenue, former Defense Secretary Donald Rumsfeld wrongly predicted in October 2003.

Ultimately, Washington squandered $60 billion on Iraq’s botched reconstruction. The U.S. government left the country in shambles, vulnerable to the Islamic State’s operatives, and ready to forge military ties with Iran.

Trump’s call for easy fixes and letting post-conflict oil pay the bills coincides with our country’s latest Middle Eastern milestone. The Gulf War officially began with the bombing of Baghdad on January 17, 1991. Happy 25th anniversary, everybody!

While shorter and cheaper than the second Iraq War, that misadventure set the stage for the failures that followed. It dragged on in other ways through years of harsh economic sanctions and intermittent bombing.

The conflict inflicted immeasurable misery upon the Iraqi people with relatively little inconvenience on our part. Since it ended, however, cancers and other chronic diseases have sickened and even killed some 200,000 Gulf War veterans.

Isn’t it time to stop pretending that Americans can quickly fix the Middle East’s problems and deluding ourselves about how the profits from taking their oil will pay the tab for our military intervention?

It sure would be nice if the GOP presidential debate moderators were to ask The Donald some of these questions.

Columnist Emily Schwartz Greco is the managing editor of OtherWords, a non-profit national editorial service run by the Institute for Policy Studies. OtherWords.org. 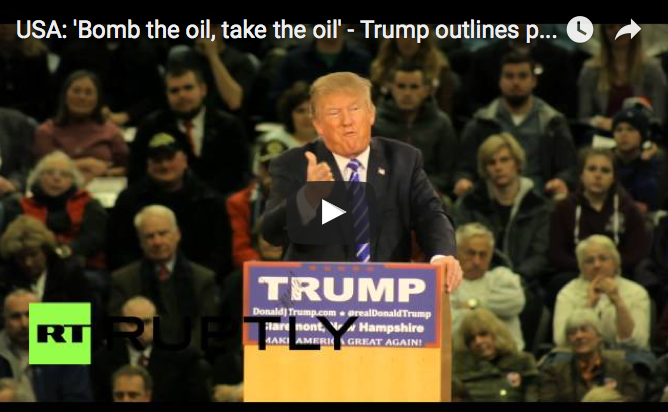