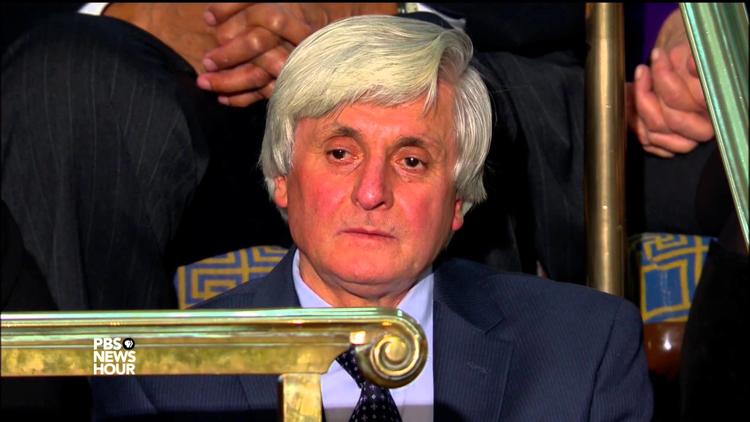 President Obama’s last State of the Union address this year was largely lacking in specifics and replete with high ideals and ambitious goals like curing cancer.

But he did address some issues in everyday politics. One of the more powerful moments came when he implicitly attacked Donald Trump and several other GOP presidential candidates for trying to get ahead by fanning the flames of anti-Muslim bigotry or by stereotyping Latinos or African-Americans.

“That’s why we need to reject any politics that targets people because of race or religion. This isn’t a matter of political correctness. It’s a matter of understanding what makes us strong. The world respects us not just for our arsenal; it respects us for our diversity and our openness and the way we respect every faith. His Holiness, Pope Francis, told this body from the very spot I stand tonight that “to imitate the hatred and violence of tyrants and murderers is the best way to take their place.” When politicians insult Muslims, when a mosque is vandalized, or a kid bullied, that doesn’t make us safer. That’s not telling it like it is. It’s just wrong. It diminishes us in the eyes of the world. It makes it harder to achieve our goals. And it betrays who we are as a country.”

If I’m not mistaken, this is the first time an attack on Islamophobia has figured in a State of the Union address; but surely in any case it is the most extensive defense of Muslims by a sitting president in history. Obama makes the important point that the image of intolerance projected by Trump and others toward Muslims damages US national security and makes it more difficult to secure the cooperation of Muslim-majority states. Racial prejudice on a large scale always has foreign policy implications. (Arab satellite t.v. was swooning over this part of Obama’s speech).

“That’s why we built a global coalition, with sanctions and principled diplomacy, to prevent a nuclear-armed Iran. As we speak, Iran has rolled back its nuclear program, shipped out its uranium stockpile, and the world has avoided another war.”

You wonder if originally this para was a bigger part of the speech but perhaps the section had to be cut down because the Iranians took 10 US sailors prisoners just before the speech began.

Obama devoted the most space to the fight against Daesh (ISIS, ISIL). He made several points. First, Daesh is not a new Soviet Union or some large important state. It is just a radical fringe, dangerous for the terror it can spread or the soft-target civilians it can kill, but hardly a threat to the existence of the United States. Obama was pushing back against the over-the-top rhetoric of GOP presidential candidates.

“I told you earlier all the talk of America’s economic decline is political hot air. Well, so is all the rhetoric you hear about our enemies getting stronger and America getting weaker. The United States of America is the most powerful nation on Earth. Period. It’s not even close. We spend more on our military than the next eight nations combined. Our troops are the finest fighting force in the history of the world. No nation dares to attack us or our allies because they know that’s the path to ruin. Surveys show our standing around the world is higher than when I was elected to this office, and when it comes to every important international issue, people of the world do not look to Beijing or Moscow to lead – they call us.

Obama appealed to the notion of a mysterious political collapse in the Middle East, which he said it will take many years to replace with a new system. Some of the collapse, he said, is rooted in age-old sectarian struggles (this is not true). He concluded, “It’s up to us to help remake that system. And that means we have to set priorities.”

I was a little taken aback that Obama should speak of “remaking” the Middle East “system.” Didn’t he learn anything from the mistakes of Bush?

“Priority number one is protecting the American people and going after terrorist networks” but this is just routine counter-terrorism, not WW III:

But as we focus on destroying ISIL, over-the-top claims that this is World War III just play into their hands. Masses of fighters on the back of pickup trucks and twisted souls plotting in apartments or garages pose an enormous danger to civilians and must be stopped. But they do not threaten our national existence. That’s the story ISIL wants to tell; that’s the kind of propaganda they use to recruit.

Obama then praised his own gradualist approach to destroying Daesh:

That’s exactly what we are doing. For more than a year, America has led a coalition of more than 60 countries to cut off ISIL’s financing, disrupt their plots, stop the flow of terrorist fighters, and stamp out their vicious ideology. With nearly 10,000 air strikes, we are taking out their leadership, their oil, their training camps, and their weapons.”

While Obama may be right that his retraining program for the Iraqi army is having some success (the retrained brigades fought successfully in Ramadi), it isn’t true that his training efforts have yielded any success at all in Syria.

Obama asked Congress for a declaration of war that specifically targets Daesh. (The Republicans have signaled that he won’t get it).

Obama didn’t say much about all this, but isn’t it weird that the GOP talks about Daesh as though the sky is falling, but then won’t authorize a use of force against it?

Obama also criticized all the talk on the Republican Right wing of carpet bombing Syria. He said that many places in the Middle East and Asia may become unstable:

Some of these places may become safe havens for new terrorist networks; others will fall victim to ethnic conflict, or famine, feeding the next wave of refugees. The world will look to us to help solve these problems, and our answer needs to be more than tough talk or calls to carpet bomb civilians. That may work as a TV sound bite, but it doesn’t pass muster on the world stage.”

Obama was also impatient with implicit calls to conduct foreign invasions and do nation-building on a large scale:

“We also can’t try to take over and rebuild every country that falls into crisis. That’s not leadership; that’s a recipe for quagmire, spilling American blood and treasure that ultimately weakens us. It’s the lesson of Vietnam, of Iraq – and we should have learned it by now.”

He concluded by urging patience, wisdom and coordination in the midst of a political season full of bluster and cowboyism:

“Fortunately, there’s a smarter approach, a patient and disciplined strategy that uses every element of our national power. It says America will always act, alone if necessary, to protect our people and our allies; but on issues of global concern, we will mobilize the world to work with us, and make sure other countries pull their own weight. That’s our approach to conflicts like Syria, where we’re partnering with local forces and leading international efforts to help that broken society pursue a lasting peace.

Obama’s argument for the success of his approach looks more solid the wake of the retaking of Ramadi by the Iraqi government.

Obama was not, however, entirely forthcoming about actual US policy in Syria, which has been for the CIA to use Saudi Arabia as a pass-through for delivering T.O.W. anti-tank munitions to “vetted” rebel groups which, however, have often tactically allied with al-Qaeda in Syria (the Nusra Front) or Salafi allies of al-Qaeda. This replay of 1980s Reagan Afghanistan policy can only end badly for the US, which is strengthening, willy-nilly, the hand of Ayman al-Zawahiri in the Middle East (al-Zawahir was a mastermind of the 9/11 attacks).

Obama’s counsel of decent gradualism and alliance-building thus hides a dependence on shady covert operations, dubious allies, and extra-judicial tactics like the use of drones. Even his actual policies, as opposed to the ideals of which he spoke, however, are of course far preferable to the proposals being batted around by the GOP frontrunners, which come as though from another dimension and if implemented would throw the world into chaos.