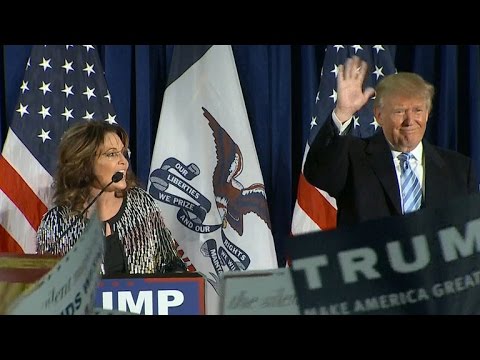 The term “political correctness” has a long and varying history, but what do Donald Trump and Sarah Palin mean when they attack it? They are using it to mean anti-racism. A day after Martin Luther King Day, Sarah Palin endorsed Donald Trump for president in Ames, Iowa, and actually compared being against racism to being a terrorist suicide bomber:

““Well, he being the only one who’s been willing, he’s got the guts to wear the issues that need to be spoken about and debate on his sleeve, where the rest of some of these establishment candidates, they just wanted to duck and hide. They didn’t want to talk about these issue until he brought ‘em up. In fact, they’ve been wearing a, this, political correctness kind of like a suicide vest. And enough is enough. These issues that Donald Trump talks about had to be debated. And he brought them to the forefront. And that’s why we are where we are today with good discussion. A good, heated, and very competitive primary is where we are. And now though, to be lectured that, “Well, you guys are all sounding kind of angry,” is what we’re hearing from the establishment. Doggone right we’re angry! Justifiably so! Yes! You know, they stomp on our neck, and then they tell us, “Just chill, okay just relax.” Well, look, we are mad, and we’ve been had. They need to get used to it.”

But its contemporary resonances come out of the 1970s and 1980s, when liberals, feminists and New Leftists used it to make fun of doctrinaire positions of any sort.

In the past few decades, the phrase is thus a joke among liberals and leftists. (Geoffrey Hughes gives the example of The Village Voice, 1991: “I’ve been chided by a reader for using the word gringos and informed that European-American is politically correct.” The Village Voice author was being dismissive of his reader’s overly thin skin about language.)

The right wing use of the term is thus an attempt to impose on this ironic sense of the term, on this jokey dismissal, the old Stalinist sense of a demand for adherence to a party line, a doctrinaire conformity. Actually there likely isn’t anyone left who actually uses the term in that un-ironic way any more.

So what did Palin mean by “politically correct” being used by politicians as a sort of terrorism?

She meant that in normal American society it has become inappropriate to say racist things in public, about immigrants and minorities. And she is suggesting that anyone who orally reproaches Trump and Palin for this racism is exercising a form of terrorism.

We know that Trump’s attacks on political correctness have exactly this sense. When he was widely criticized for lumping most Mexican-Americans into the category of rapists and drug dealers, he replied, “”I have lost a lot during this Presidential run defending the people of the United States. I have always heard that it is very hard for a successful person to run for President. Macy’s, NBC, Serta and NASCAR have all taken the weak and very sad position of being politically correct even though they are wrong in terms of what is good for our country. . .”

So frank racism is not only being rehabilitated by Trump and his acolytes like Palin, but Trump is associating it with patriotism.

Kareem Abdul Jabbar pointed out that when Megyn Kelly pressed Trump on his open disdain for his female critics, whom he has termed ‘fat pigs,’ ‘dogs,’ ‘slobs’ and ‘animals,’ his two-fold response was to threaten her and then to say that he didn’t have time for political correctnesss.

The notion of “not having time for” respectful and ethical political language because the country is allegedly in the throes of an extreme crisis is classic fascism. Basic constitutional rights and even just common decency need to be jettisoned because we are in a hurry over this vague and never-specified menace.

Trump has made it clear that he thinks tolerance for the “Black Lives Matter” protesters on the part of the media and the Democratic Party is because of what he generally characterizes as political correctness (he said they are “catering” to it), implying that the protesters are being treated with kid gloves because they are African-American. When such a protester was beaten up at one his rallies, he allowed as how the man ought to have been treated that way because what he was doing was “disgusting.”

Trump stands for white, rich male privilege, for the right of rich white men to be dismissive of women, minorities and immigrants. He stands, like all fascists, for racial and social hierarchies. Some people are better than others. He even openly deployed the old WASP superiority against Ben Carson, pointing out that he is Presbyterian (“right down the middle”) but that Carson is a Seventh-Day Adventist. Carson is not a White Anglo-Saxon Protestant in the old sense of a member of a white northeast elite family of Congregationalists or Presbyterians, but a wretched sectarian. The put-down of Adventism acted in this sense as a proxy for race.

The Civil Rights movement changed the terms of permitted political discourse in the United States. Even someone as powerful as Don Imus, who made and broke political careers in Washington DC, could be fired for publicly calling bright, accomplished African-American varsity basketball players “nappy-headed hoes.”

It even went to the extent that Americans agreed to elect an African-American president not once but twice.

Trump so disliked seeing African-American workers at his establishments that they were told to hide when he came for an inspection.

So if Trump is about a resurgence of supremacist white nationalism (which is correctly perceived by KKK, Neo-Nazis and others of his supporters slightly to the right of him), and if white nationalism is the true American patriotism, then obviously standing up for the civil rights and the social equality of minorities and women (characterized as a demand for “political correctness”) is a thwarting of the national racial will and so a form of terrorism.

Characterizing liberals and leftists as terrorists because they get in the way of the assertion of power by racial and economic elites was a typical tactic of Francisco Franco, Benito Mussolini and other predecessors of Trump during the mass politics of the 1920s and 1930s. It is by now an old, tried and true path to power for the Right. It isn’t surprising to see it deployed by Palin and Trump.