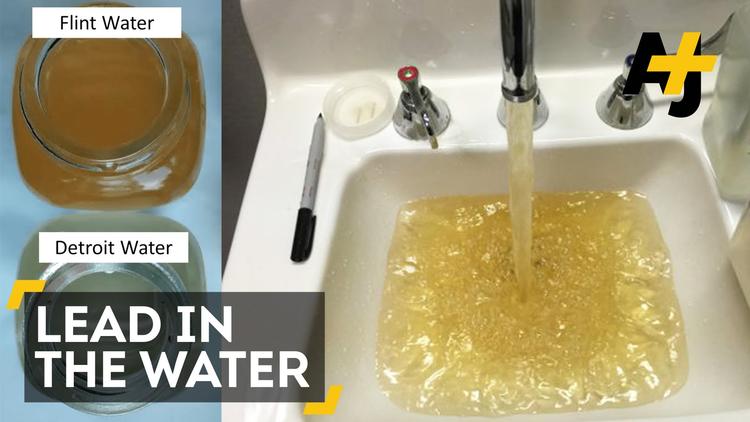 Important Reminder in the Flint Crisis: People Still Have No Safe Water

Emergency declared by governor, but there is no city- or state-run distribution of water.

“[P]eople knew from the beginning, as soon as the switch was made in April of ’14, that the water was bad,” said Curt Guyette, investigative reporter for the ACLU of Michigan. (Photo: Steve Johnson/flickr/cc)

The lead contaminated water crisis in Flint, Michigan is receiving increased national attention—yet what the people of the Rust Belt city urgently need to receive is clean drinking water.

Republican Governor Rick Snyder on Thursday offered a second apology for the crisis, saying it’s an “unfortunate situation.” That problem, which began as the city was under the control of a state-appointed emergency manager, has left 200 children below the age of six with confirmed elevated blood lead levels, spurred calls for Snyder’s ouster, and prompted filmmaker Michael Moore to say the governor has to go to jail, as he “effectively poisoned, not just some, but apparently ALL of the children in my hometown of Flint, Michigan.”

Flint Mayor Karen Weaver said Thursday that it would cost as much as $1.5 billion to fix the city’s drinking water infrastructure. Researchers at Virginia Tech have said that the problem—caused when Flint moved its water supply from the Detroit system to the Flint River without the proper corrosive controls—could have been fixed with as little as $100 a day.

Curt Guyette, investigative reporter for the ACLU of Michigan, told Democracy Now! on Friday that the switch, made in a supposed money-saving move, came with dangerous yet completely predictable results.

People knew from the beginning, as soon as the switch was made in April of ’14, that the water was bad. It looked bad. It tasted bad. It smelled bad. And there was all sorts of problems throughout 2014. In 2015, one of the residents, LeeAnne Walters, had her water tested by the city, and the lead levels came back at over 100 parts per billion. Of course, there’s no safe levels of lead whatsoever. The federal action level is 15 parts per billion.

While the water was switched back to Detroit ‘s system in the fall, “the water is not safe in Flint,” MSNBC‘s Rachel Maddow pointed out Thursday.

“The city is in need of FEMA-like if not FEMA response,” she said.

Despite Snyder’s declaration of an emergency and increased attention on the crisis, people in Flint are forced to rely on donations—which, in some places at least, are running dry; and may not have water filters—some of which are being distributed by people sentenced to community service.

And Stephainie Gosk, NBC News correspondent, told Maddow that there is no city- or state-run distribution of water.

Internal emails showed that his high-level staffers were aware of lead poisoning in Flint’s public water supply six months before the administration declared a state of emergency.

According to the newly-released emails, which were obtained by NBC News, Snyder’s chief of staff at the time, Dennis Muchmore, wrote to an unnamed high-level health department staffer: “I’m frustrated by the water issue in Flint.”

“These folks are scared and worried about the health impacts and they are basically getting blown off by us (as a state we’re just not sympathizing with their plight),” Muchmore wrote in the email, according to journalists Stephanie Gosk, Kevin Monahan, Tim Sandler and Hannah Rappleye.

“I really don’t think people are getting the benefit of the doubt,” wrote Muchmore. “Now they are concerned and rightfully so about the lead level studies they are receiving.”

AJ+: “Lead In The Water In Flint, Michigan”