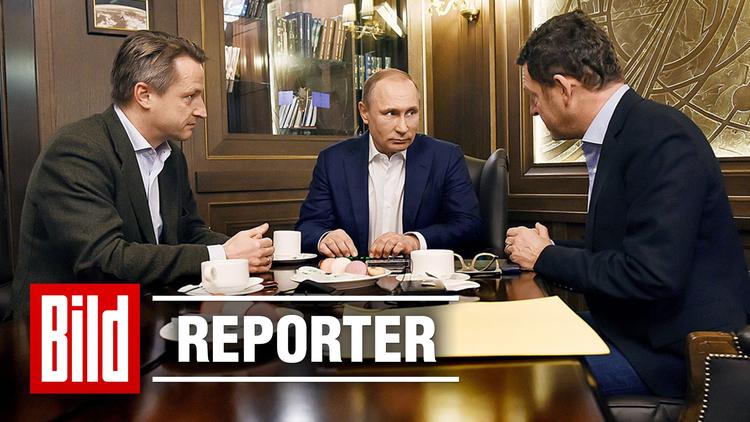 Excerpt from part II of Russian President Vladimir Putin’s interview in the German publication, Der Bild, on Jan. 12, 2016, according to the Kremlin website. Highlight: Putin admits that Syrian dictator Bashar al-Assad has made many errors, and says that if necessary he can have asylum in Moscow.

Question: Regrettably, at the moment the Russia-NATO relations are at the stage of confrontation, rather than cooperation. Turkish military forces have downed a Russian aircraft, and Russian and Turkish warships are reported to come dangerously close to one another all the more often. Do you think that such developments may at a certain point cause an escalation from a cold war to actual hostilities?

Vladimir Putin: Turkey is a NATO member. However, the problems that have emerged have nothing to do with Turkey’s NATO membership; nobody has attacked Turkey. Instead of trying to provide us with an explanation for the war crime they committed, that is, for downing our fighter jet that was targeting terrorists, the Turkish government rushed to NATO headquarters seeking protection, which looks quite odd and, in my view, humiliating for Turkey.

I repeat, NATO has to protect its members from attack, but nobody has attacked Turkey. If Turkey has vested interests elsewhere in the world, in the adjacent countries, does it mean that NATO must protect and secure these interests? Does it mean that Germany, as a NATO member, must help Turkey to expand into neighbouring territories?

I hope that such incidents will not cause large-scale hostilities. Of course, we all realise that Russia, once under threat, would defend its security interests by all available means at its disposal, should such threats against Russia arise.

Question: Now let’s turn to Syria, if you do not mind.

We say that we are tackling common challenges there. This is the joint fight against ISIS in Iraq and Syria. However, some people in the West say that Russian military forces in Syria are fighting the anti-Assad rebels, rather than ISIS. What would be your response to the allegations that Russia is hitting the wrong targets?

Vladimir Putin: They are telling lies. Look, the videos that support this version appeared before our pilots even started to carry out strikes against terrorists. This can be corroborated. However, those who criticise us prefer to ignore it.

American pilots hit the Doctors Without Borders hospital in Kunduz, Afghanistan, by mistake, I am sure. There were casualties and fatalities among civilians and doctors. Western media outlets have attempted to hush this up, to drop the subject and have a very short memory span when it comes to such things. They mentioned it a couple of times and put it on ice. And those few mentions were only due to foreign citizens from the Doctors Without Borders present there.

Who now remembers the wiped out wedding parties? Over 100 people were killed with a single strike.

Yet this phony evidence about our pilots reportedly striking civilian targets keeps circulating. If we tag the “live pipelines” that consist of thousands of petrol and oil tankers as civilian targets, than, indeed, one might believe that our pilots are bombing these targets, but everyone is bombing them, including the Americans, the French and everyone else.

Question: However, it is clear that Syrian President Bashar al-Assad is carrying out strikes against his own population. Can we say that al-Assad is your ally?

Vladimir Putin: You know, this is a rather subtle issue. I think that President al-Assad has made many mistakes in the course of the Syrian conflict. However, don’t we all realise full well that this conflict would never have escalated to such a degree if it had not been supported from abroad through supplying money, weapons and fighters? Tragically, it is civilians who suffer in such conflicts.

But who is responsible for that? Is it the government, which seeks to secure its sovereignty and fights these anti-constitutional actions, or those who have masterminded the anti-government insurgency?

Regarding your question if al-Assad is an ally or not and our goals in Syria. I can tell you precisely what we do not want to happen: we do not want the Libyan or Iraqi scenario to be repeated in Syria. I have to give due credit to Egyptian President Abdel Fattah el-Sisi, and I told him this myself, because had he not taken on the responsibility, demonstrated fortitude and brought the country under control, then we might have witnessed the Libyan scenario in Egypt. In my view, no effort should be spared in strengthening legitimate governments in the region’s countries. That also applies to Syria. Emerging state institutions in Iraq and in Libya must be revived and strengthened. Situations in Somalia and other countries must be stabilised. State authority in Afghanistan must be reinforced. However, it does not mean that everything should be left as is. Indeed, this new stability would underpin political reforms.

As far as Syria is concerned, I think that we should work towards a constitutional reform. It is a complicated process. Then, early presidential and parliamentary elections should be held, based on the new Constitution. It is the Syrian people themselves who must decide who and how should run their country. This is the only way to achieve stability and security, to create conditions for economic growth and prosperity, so that people can live in their own homes, in their homeland, rather than flee to Europe.

Question: But do you believe al-Assad is a legitimate leader if he allows the destruction of his country’s population?

As I have already said, though, this does not mean that everything is all right out there and that everyone is right. This is exactly why I believe political reforms are needed so much there. The first step in that direction should be to develop and adopt a new Constitution.

Question: If, contrary to expectations, al-Assad loses the elections, will you grant him the possibility of asylum in your country?

Vladimir Putin: I think it is quite premature to discuss this. We granted asylum to Mr Snowden, which was far more difficult than to do the same for Mr al-Assad.

First, the Syrian people should be given the opportunity to have their say. I assure you, if this process is conducted democratically, then al-Assad will probably not need to leave the country at all. And it is not important whether he remains President or not.

You have been talking about our targets and means, and now you are talking about al-Assad being our ally. Do you know that we support military operations of the armed opposition that combats ISIS? Armed opposition against al-Assad that is fighting ISIS. We coordinate our joint operations with them and support their offensives by airstrikes in various sections of the frontline. This is hundreds, thousands of armed people fighting ISIS. We support both the al-Assad’s army and the armed opposition. Some of them have publicly declared this, others prefer to remain silent, but the work is on-going.

Question: Finally, I would like to touch upon a topic that has never come up before, that is the rift between Saudi Arabia and Iran, as if Syria was not enough. Does it mean that this rift can lead us to a very grave conflict?

Vladimir Putin: It hampers the efforts to settle the Syrian crisis and the fight against terrorism, as well as the process of halting the inflow if refugees to Europe, that much is certain.

As for whether this will lead to a major regional clash, I do not know. I would rather not talk or even think in these terms. We have very good relations with Iran and our partnership with Saudi Arabia is stable.

We regret this has happened, especially given that the cleric had not been fighting against Saudi Arabia with lethal force. Yet it is true that an embassy attack is a totally unacceptable occurrence in the modern world. As far as I know, the Iranian authorities have arrested several perpetrators of the assault. If our participation in any form is needed, we are ready to do everything possible to resolve the conflict as soon as possible.