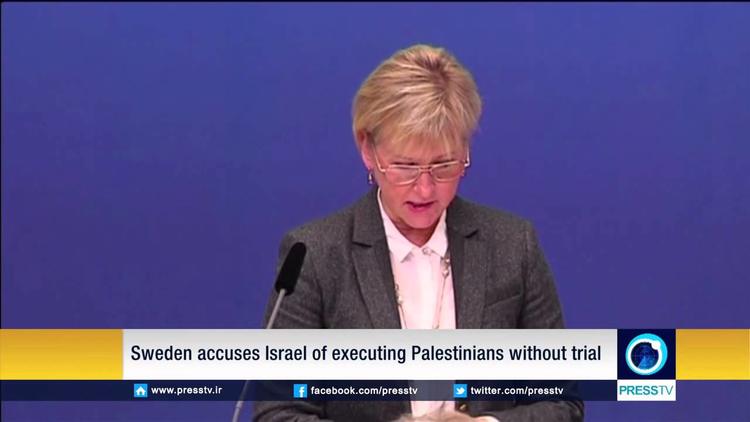 BETHLEHEM (Ma’an) — Israeli Prime Minister Benjamin Netanyahu on Thursday waded into a growing row over a call by Swedish Foreign Minister Margot Wallstrom for an investigation into the possibility that Israeli forces have been carrying out “extrajudicial executions.”

Speaking to foreign reporters at a new year’s reception, Netanyahu said Wallstrom’s comments had singled out Israel in “an absurd way” and were “outrageous, immoral, unjust, and just wrong.”

The prime minister said: “People are defending themselves against assailants wielding knives who are about to stab them to death … and that’s extrajudicial killings?”

Wallstrom made the call during a Swedish parliamentary debate on Tuesday, pointing to months of violence in Israel and the occupied Palestinian territory, where scores of Palestinians have been shot dead in recent months.

“It is vital that there is a thorough, credible investigation into these deaths in order to clarify and bring about possible accountability,” Wallstrom was reported to have said.

Israel’s Foreign Ministry quickly responded by expressing outrage, saying that her comments presented “a distorted representation of reality” and were an indication of Wallstrom’s “biased and hostile attitude toward Israel.”

The ministry said that Wallstrom would play no part in relations between Israel and the Palestinians “in the foreseeable future.”

The ministry’s chief spokesperson Emmanuel Nahshon later added that Wallstrom was “not welcome in Israel.”

Asked for clarification of his remarks, spokesperson Alon Lavi told Ma’an that the Swedish Foreign Minister had not been “banned” from Israel, although she was nevertheless not welcome.

He said that her views were “not objective and one-sided,” and that they were “encouraging violence against Israelis.”

Jamal Nazzal, the chief spokesperson for Fatah in Europe, on Thursday welcomed the call, thanking Sweden for its “courageous policies toward defending human rights and democracy throughout the world.”

In a statement, he said: “We don’t understand the negative reaction of the Israeli government to such an international call to accept accountability and international law.”

Palestinians and rights groups have referred to multiple cases where alleged Palestinian attackers were shot dead as “extrajudicial killings,” arguing that Israeli soldiers had insufficient reason to kill.

Amnesty International called on Israel in late October to stop its “unlawful” killings, saying that the group’s investigations had found at least four cases where Palestinians were deliberately shot dead when they posed no imminent threat.

“There is mounting evidence that, as tensions have risen dramatically, in some cases Israeli forces appear to have ripped up the rulebook and resorted to extreme and unlawful measures,” the group’s Middle East and North Africa director, Philip Luther, said.

“Intentional lethal force should only be used when absolutely necessary to protect life,” he said. “Instead we are increasingly seeing Israeli forces recklessly flouting international standards by shooting to kill in situations where it is completely unjustified.”

At that time, one month into the unrest, Israeli forces had killed some 60 Palestinians. That figure has since risen to more than 150 Palestinians, with the violence continuing into the new year.