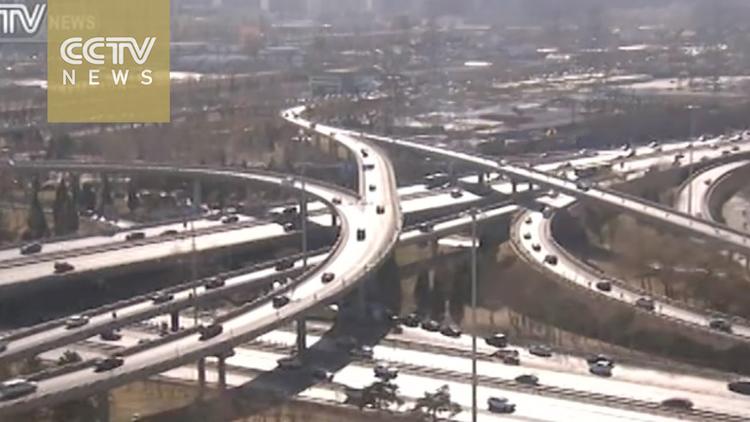 Humanity is not abandoning fossil fuels fast enough to avoid some massive changes to our world’s climate, with all the implications that change has for sea level, coastal erosion, extreme weather, and desertification and drought. There have been impressive advances in adoption of solar and wind technology in 2015, but compared to the crisis, it is not nearly enough. I say this not to provoke despair but simply to underline that the crisis can be bad, or worse, or the absolute worst. We get to decide for future generations the kind of world they will live in.

The overriding question is how bad it will get. I am going to talk to an American audience, because the US is the one place where all this is still controversial (!), and this country produces 5.4 billion metric tons of carbon dioxide a year, among the highest per capita emissions in the world. I am therefore going to use Fahrenheit, since the Centigrade system confuses the 315 million Americans and downplays the threat.

All this is on my mind because I’ve been teaching history and climate change, and I think a historical sense of relative change over time is useful here. There is no point in talking absolutes.

Basically, and despite the more optimistic goals adopted in Paris at COP21, the world is locked into a rise of 3.6 degrees F. (2 degrees C.) already. Note that that is an average rise of surface temperature, including Antarctica, the cold oceans (most of the world’s surface area), etc. So if you are on land in a warm place like Arizona or California, it isn’t just that instead of a hot summer day being 115 F. in the shade, it will be 118.6 F. in the shade. The 3.6 degrees increase on average could take you into the 120s F.

The only question is, will we go on up from there– to 7.2 degrees F or 12 degrees F. average increase? Because that could make Arizona south of Flagstaff uninhabitable in the summer.

So, will we keep to a 3.6 degrees F. average increase, or go on up to 5 degrees, 7 degrees (click on this link to see what that would mean), 10 degrees? That’s the question.

James Hansen, the founding father of contemporary climate change science when he was at NASA, believes that a 3.6 degrees F. increase is already potentially deadly– and that is what we are bequeathing to our children, grandchildren and great grandchildren; more would be deadlier yet.

The problem is that there are potential tipping points into new, complex or chaotic climate systems, and the hotter we make it the more likely we are to set off a tripwire. If we warm up the frozen methane clathrates on the sea floor of our continental shelves, they could burp up the most potent warming gas known, and lead to a one-two punch of warming, as may have happened in the distant past. Paleo-archeologists in Sweden found evidence in the soil of a 10,000-year-long stationary storm during a very warm period of the earth’s past. That might be hard on your roof.

Likely Miami and New Orleans are already gone. New York and Washington D.C. substantially gone. Don’t bequeath your grandchild a house in West Palm Beach. Southern Florida is where most of the state’s groundwater comes from, but the soil down there is limestone and porous, so rising sea water is going to seep up into the aquifers. Miami will be submerged, because no dike system can keep the water from welling up underground. A lot of Floridians will have to move north or the state will have to put in a lot of solar desalinization plants (but those will gradually be submerged, too, so you’d have to keep rebuilding them in each generation).

But then the question becomes, whether we will also lose cities at higher elevations– 10, 15, even 30 or 40 feet above sea level.

So I am arguing for a sliding scale. The more emissions we avoid now, the less bad it will be in the future.

There is no economical way to remove carbon from the atmosphere once it is there. About half of it will go into the ocean over the next few hundred years, causing increased salinity and a die-off of probably half of marine life, the fish on which many humans depend. The rest will be washed out of the atmosphere by binding with igneous and other rocks, over 100,000 years. If, because of celestial mechanics, we had another peak glaciation period in our future over that 100,000 years, as happened 40,000 to 12,000 years ago, it has been forestalled. The species homo sapiens sapiens is probably about 120,000 years old and largely evolved in relatively cold conditions. We have now set up a future as long as our own past of Hot World, a world very unlike the one we evolved to be adapted to.

Every ton of carbon dioxide we avoid now (and Americans put out on average 16 metric tons of CO2 a year per person) is a temperature increase that doesn’t happen. When I moved into my present home in the early 1990s I put in insulation, which substantially cut my natural gas heating bill. I put solar panels on my roof and got an electric car a couple of years ago. I figure in just those 2 years I’ve avoided something like 7 or 8 tons my household would otherwise have emitted. And the insulation was more carbon avoided. A gift to my, and your, grandchildren. Not everyone can do this; some people are renters or take public transportation and are probably already more virtuous than I. The task before us can’t be accomplished anyway by individuals, but that is no reason for us each not to do our part. That is part of my argument for scalability.

Germany shows that a mature, growing economy can move relatively rapidly to renewables for electricity generation. In 2015 about a third of German electricity came from renewables. While some complain that its price for electricity is high, that is a trick. Germans put in insulation and got more efficient appliances, so they actually spend less on electricity than Texans even if their cost per KWh is higher. Anyway those price comparisons always leave out the environmental impact of fossil fuels. Coal looks like it can generate electricity for 5 cents a kilowatt hour. The real cost if you look at lost real estate, health costs in cities like Beijing and Delhi, etc., is probably closer to 48 cents a kilowatt hour. So Germany’s electricity from renewables is much cheaper in reality.

Germany did it by providing financing for the soft costs of renewables– installation, etc., which are increasingly the bottleneck in the US. The state of Michigan gave me no help whatsoever with my panels and in fact apparently wants to punish me for putting them in. Michigan has lost a million people since I moved there in the early 80s, and could benefit from an enlightened energy policy. This situation shows that Mark Twain was wrong when he said, “Fleas can be taught nearly anything that a Congressman can.” Fleas would have the sense to respond to being cooked by high temperatures.

My own university, the University of Michigan, has among the more backward energy policies of any major university in the country. Ohio State leased a wind farm that will supply 25% of its electricity. The University of Hawaii is going completely green by 2045. The University of Michigan still plans on emitting like 510,000 tons of CO2 a year in 2025, down only slightly from today’s amount (there is a greenwashing element in the story, since this projected amount is a 25% decrease from 2006 levels– but the baseline should be 1990, since emissions increased enormously after Kyoto). If even universities, which ought to be centers of enlightened thinking and innovation, feels no more urgency than this, what can we hope from everyone else?

So, this thing is on a scale. We are going to a 3.6 degrees F. average increase. We could go to 5 degrees F or 10 degrees F. You or rather your great-grandchildren won’t like a 10 degrees F. increase. You won’t even like 3.6 degree F. very much (it won’t kick in for a while). It is up to you how bad it is going to get.