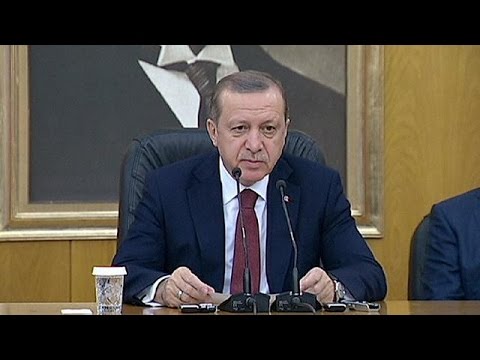 Turkish president Tayyip Erdogan on Thursday cited Hitler in support of his contention that a presidential system can coexist with a “unitary state,” i.e., with a non-federal government. The United States has a presidential system, but the presidency’s powers are limited because it is a federal system with enormous rights and prerogatives retained by the state. I suppose the context is that people are arguing to Erdogan that if he takes Turkey into a presidential system, it could break up the country because there would be regionalist responses to this concentration of power. He was trying to deflect this critique, and what his mind happened on was the example of fascist Germany!

Erdogan is neither a fascist nor a totalitarian, and there is no evidence he has lost faith in having regular elections. He has become increasingly authoritarian, however, and is now going around accusing his political rivals of treason. A decade ago, he stood for a certain amount of political pluralism, though he has relinquished most of the latter commitments in the past two years. He was just trying to bat down critics of his plan for a strong presidency by pointing to places where that system has not implied moving to a federal system. But the remark shows how tone deaf he has become, how insensitive to the impact of his remarks, and, indeed, how arrogant.

Erdogan is tired of being a ceremonial president. He wants a presidential system for his country, on the American or Brazilian model. Turkey, like most of the European Union with the exception of France, has a parliamentary system, where the prime minister comes out of parliament’s largest party and is the head of state. Parliamentary systems can provide checks to executive power– smaller parties often have inordinate power because they are swing votes on key issues. All the regions of the country are represented. A strong presidential system lacks these checks unless other checks and balances are built in, such as states’ rights federalism or constitutional prerogatives for parliament. Erdogan does not seem big on checks and balances any more.

Even with its current parliamentary system, Turkey’s state has authoritarian tendencies and lacks basic press and academic freedoms. While you can argue about the relative virtues of parliamentary versus presidential rule, there doesn’t seem any doubt that Erdogan wants the change for all the wrong reasons– to concentrate power in his hands.

He gave his enemies, and critics of the presidential system, lots of ammunition by invoking Hitler.

But beyond this immediate constitutional issue, it is worrisome for Turkey’s politics that Erdogan is developing Trumpmouth syndrome, and one worries that there is some sort of cognitive decline or disorder at work in his recent wild oscillations. This summer, in order to reverse the results of the parliamentary election, which gave a pro-Kurdish party 13% of seats and denied his Justice and Development Party an absolute majority, he cancelled the peace process and went to war with the guerrilla group, the Kurdistan Workers Party (a group with a separatist and Marxist past that Turkey and the US list as a terrorist organization). The PKK may be partly to blame for the collapse of peace talks (it has been accused of massive human rights violations itself), but it seems clear that the impetus for the new conflict was Erdogan’s bid to undo the June elections and get a parliamentary majority. He just fell short. At 50 percent of seats gained on Nov. 1 in snap elections, his party has a mandate to rule without a coalition partner. But that isn’t enough to change the constitution.

These measures seem wild and unnecessary and wholly instrumental in a way that suggests a loss of moral compass. I don’t think the Erdogan of the early zeroes was an act, when he spoke for pluralism. I think something has gone wrong with him, whether the pride of long office or producing too much of one brain chemical and not enough of another.

In any case Erdogan was wrong that Hitler came to power in a presidential system; and he is also wrong that Hitlerism did not indict the unitary state; you will note that Germany is now a federal republic.

The Hitler remark is, however, important beyond its political context. It suggests there is something rotten in the state of Denmark.