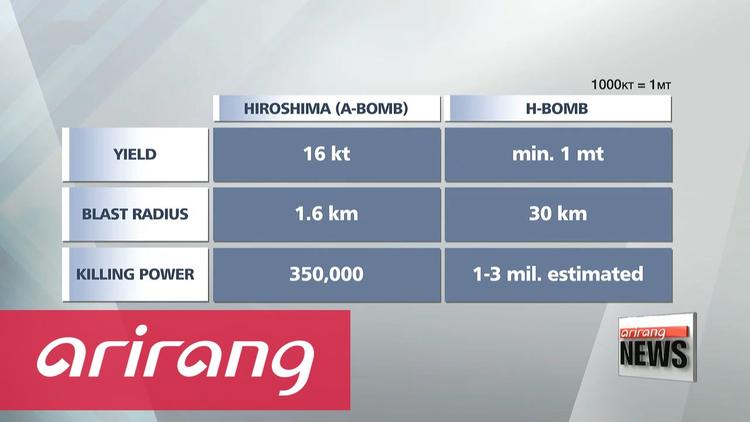 “So North Korea claims it′s a hydrogen not an atomic bomb that it′s tested. But what exactly is the difference， and if true what would the implications be？
Kwon Jang－Ho explains.

Atomic bombs are also known as fission bombs， as they use nuclear fission reactions to set off the explosion.

They employ pieces of enriched uranium or plutonium and shoot them together to cause a chain reaction， releasing a huge amount of energy.

Hydrogren bombs， or thermonuclear weapons， are also know as fusion bombs， because they require a fusion reaction between hydrogen isotopes.

A fusion reaction is much bigger than that produced from a fission bomb， but it requires an enormous amount of energy to trigger it.

This amount of power can only be produced by a fission reaction.

So in essence， an H－bomb requires an A－bomb inside it to set it off.

The Hiroshima A－bomb dropped on Japan in 1945 was recorded to have released about 15 kilotons in energy and carried a blast radius of 1.6km.

The minimum yield an H－bomb is 1 megaton and a blast radius of around 30km.

The largest A－bomb to date was made by the U.S. called Ivy King， which had a yield of 500 kilotons.

The largest H－bomb ever made was the Russian Tsar Bomba， which had a yield of 50 megatons， 100 times more powerful than the Ivy King.

An H－bomb is also said to have no potential upper yield limit， unlike the A－bomb.
Kwon Jang－ho， Arirang News.

Arirang News: “What is an H-Bomb?”