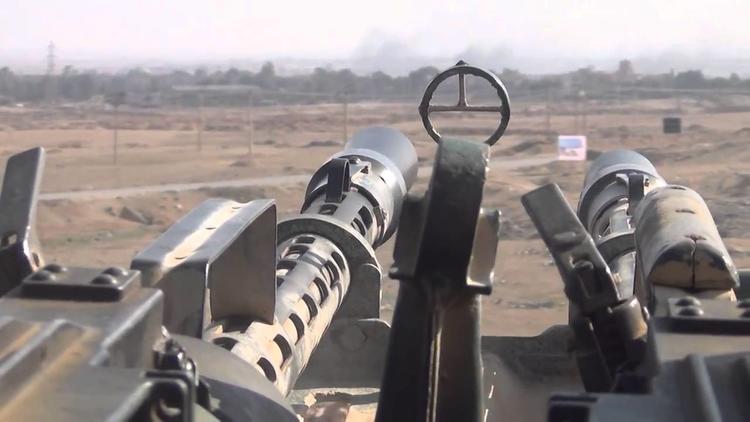 The news comes amid rising tensions between the U.S.-backed Kurdish militia and Arabs in Syria.

The “first group of Arab fighters” joined the Syrian Kurdish militia known as the YPG, according to Kurdish media.

The YPG has been known to include non-Kurdish forces, including Western, Turkish and Assyrian fighters, and it is part of a U.S.-backed coalition, the Syrian Democratic Forces, that includes some Arab militias.

However, ANF News reported Monday that 34 young fighters were the first Arabs to actually graduate from the YPG’s military academy, where they were provided with “military and ideological lessons.”

Several Arab rebel groups have allied with the YPG, taking advantage of the military and political support the group receives as part of its fight against the Islamic State group. The YPG claims its ultimate goal is to establish a democratic self-governing Kurdish region in Syria.

An anonymous French volunteer, one of hundreds of Westerners who have reportedly joined the YPG, told VICE News that most fighters are “people who are politically motivated and are here more for the Rojava revolution than for (fighting) the Islamic State.”

Middle East Eye has previously reported that Christians, Druze, Turkmen, Assyrians and Sunni Arabs fight with YPG units. The group has an estimated 15,000 fighters, including an allied militia for women known as the YPG.

The YPG is seen as one of the strongest and most democratic forces fighting against the IS group. Support from the United States, in the form of both weapons and airstrikes, has bolstered its standing, prompting some Syrian rebel groups to align with the YPG through the umbrella of the Syrian Democratic Forces.

"So many people left out, left voiceless, who don’t want to be part of the radical Islam movement, they need somewhere to address themselves, this provides them with an opportunity,” Mutlu Civiroglu, a Kurdish analyst based in Washington, told Middle East Eye.

The YPG is a self-styled Marxist and atheist guerrilla group.

News of Arabs joining the YPG comes amid rising Kurdish-Arab tensions. Amnesty International has accused the YPG of carrying about abuses in some Arab villages and the militia has recently taken advantage of Russian airstrikes near Aleppo to expand its reach into territory with large Arab populations.

The YPG’s political wing, the PYD, has denied allegations of war crimes, maintaining that it never targets civilians and noting that Arabs, Christians and other minorities have been elected to govern PYD-controlled cantons.

"The YPG cares about the Kurdish-Arab brotherhood and is not fighting Arabs as promoted by the media," a spokesperson claimed.