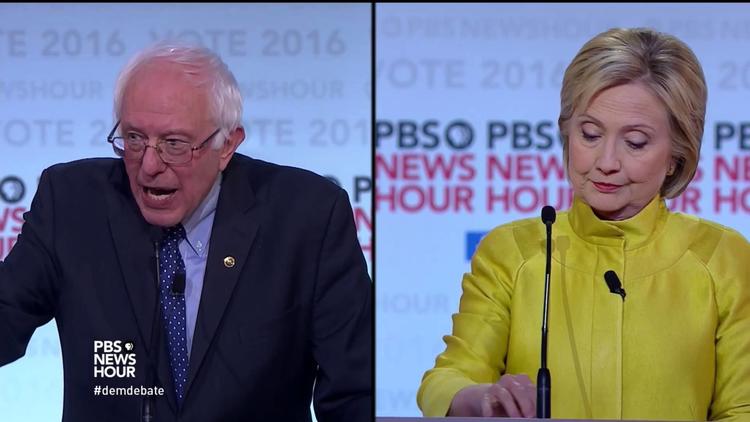 Both the Middle East conflicts and the ghost of the Vietnam War haunted the PBS Democratic debate Thursday evening. Vietnam was symbolized by Henry Kissinger, former Nixon National Security Adviser (1968-1975) and Secretary of State for Nixon and Gerald Ford (1973-77).

In the last Democratic debate, Sec. Clinton had boasted openly of her close relationship to Kissinger. Last night, Sanders used that relationship to critique Clinton as a warmonger:

“I am proud to say that Henry Kissinger is not my friend. I will not take advice from Henry Kissinger. And in fact, Kissinger’s actions in Cambodia, when the United States bombed that country, overthrew Prince Sihanouk, created the instability for Pol Pot and the Khmer Rouge to come in, who then butchered some 3 million innocent people, one of the worst genocides in the history of the world. So count me in as somebody who will not be listening to Henry Kissinger.”

Sanders deploys Kissinger as a symbol of war and aggression, blaming him for the Nixon administration decision to widen the Vietnam War to Cambodia, and for the subsequent Khmer Rouge genocide. By tying him to Sec. Clinton, Sanders is hoping to depict her as an inveterate war monger in he arena of Public consciousness.

Clinton did not reply effectively, resorting instead to saying that as secretary of State you listen to all kinds of people.

“Now I think an area in kind of a vague way, or not so vague, where Secretary Clinton and I disagree is the area of regime change. Look, the truth is that a powerful nation like the United States, certainly working with our allies, we can overthrow dictators all over the world.

And God only knows Saddam Hussein was a brutal dictator. We could overthrow Assad tomorrow if we wanted to. We got rid of Gadhafi. But the point about foreign policy is not just to know that you can overthrow a terrible dictator, it’s to understand what happens the day after.

And in Libya, for example, the United States, Secretary Clinton, as secretary of state, working with some other countries, did get rid of a terrible dictator named Gadhafi. But what happened is a political vacuum developed. ISIS came in, and now occupies significant territory in Libya, and is now prepared, unless we stop them, to have a terrorist foothold.”

Sanders even went back to the CIA overthrow of the Iranian nationalist prime minister, Mohammad Mosaddegh, in 1953.

This time, Clinton was a little better prepared, claiming that Sanders’s voting record reveals that he was less consistently anti-war than he now maintains:

“CLINTON: If I could just respond. Two points. One, Senator Sanders voted in 1998 on what I think is fair to call a regime change resolution with respect to Iraq, calling for the end of Saddam Hussein’s regime.

Clinton also defended herself from the charge of lacking political judgment by saying that she was among those who urged President Obama to send a Navy Seals team in after Osama Bin Laden. She thus recovered from he charge of serial interventionism by instancing a positive intervention.

On Syria, Sanders continued to urge a rapprochement with Iran, and Clinton attacked him on that point.

The focus was not in fact on Syria but on Iran. Clinton is making a play for older more conservative voters, whether Jewish or Gentile, who are wealthy enough to give substantial donations to her PACs. Sanders feels as though he doesn’t need those money men since he has a wide grassroots donor base.

Sanders argued that Iran could gradually be brought in to a better relationship with the US, just as Cuba had been. He thus turned the table on Clinton, since she couldn’t strongly denounce either principle without attacking President Obama, who is very popular with South Carolina African-Americans. The two candidates are vying for the African-American vote there, which is 56% of the Democratic vote.

That is the way that Kissinger hung over the debate on the modern Middle East. Kissinger is an exemplar of Realism, an amoral approach to foreign policy, seeking to uphold US interests without reference to ethics.

Clinton uses Kissinger as a way of underlining her ability to talk to Republicans and to avoid petty boycotting of others.

Bernie came close to accusing her of hanging out with war criminals.