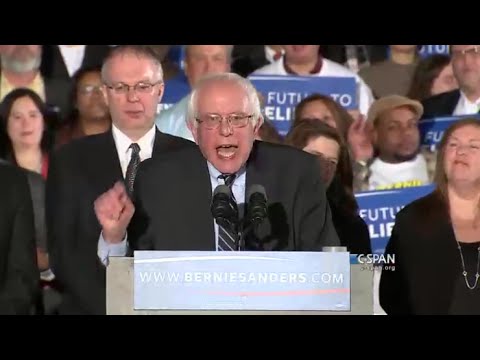 Donald Trump and Bernie Sanders won big in New Hampshire on Tuesday. Caution is in order, since that state is demographically not very much like the rest of the United States, and both candidates are Northeasterners with advantages there. US journalism dreams of a presidential election campaign for 3 years of every four, then when they finally get their wish and there is an electoral contest, they are in an amazing hurry to declare it over after the first primary.

So what foreign policies did the good people of New Hampshire vote for? Trump has been called a populist, but on foreign trade I would argue that he is a throwback to mercantilism, desiring to use the power of the state to gain trade advantages. Sanders is a Social Democrat on the Scandinavian model, who sees himself as in the FDR tradition. Let’s look at some major issues and contrast the billionaire bully and the New New Dealer.

In a way, Tuesday night was a good night for Syrian strongman Bashar al-Assad.

On Syria, Trump opposes overthrowing al-Assad, on the grounds that we can’t know what would take his place, and it might be worse (say, Daesh/ ISIL).

He also appears sanguine to let Vladimir Putin handle Syria. He said last November that he would cooperate with Putin in defeating Daesh (ISIL, ISIS). (The Obama administration may be in the process at the moment of coming around to this few and making its peace with a Russia-dominated Syria if that means the end of the civil war and of the refugee crisis.)

Trump’s campaign issued a statement thanking Putin for his own praise of Trump and saying:

“I have always felt that Russia and the United States should be able to work well with each other towards defeating terrorism and restoring world peace, not to mention trade and all of the other benefits derived from mutual respect.”

Trump has a sharp critique of China and US trade policies with China, which he accuses of stealing American jobs. But he appears to feel that the US and Russia are more complementary economically and is not as threatened by Moscow.

His creepy relationship with Putin puts me in mind of 19th century German Chancellor Bismarck’s secret treaties with the Tsars.

Sanders does not exactly agree with Trump about al-Assad, but he comes close. Sanders warns that an abrupt overthrow of the current Baath regime in Damascus could be destabilizing and says that Daesh (ISIS, ISIL) must be the priority. He takes a long view on moving al-Assad out:

So I think yeah, regime change is easy, getting rid of dictators is easy, but before you do that you’ve got to think about what happens the day after. And in my view what we need to do is put together broad coalitions to understand that we’re not going to have a political vacuum filled by terrorists, that in fact we are going to move steadily and maybe slowly toward democratic societies. In terms of Assad, [he’s] a terrible dictator, but I think in Syria the primary focus now must be destroying ISIS and working over the years to get rid of Assad. That’s the secondary issue.”

Like the other GOP candidates, Trump opposes the UN Security Council deal with Iran on limiting its nuclear program to civilian purposes. But at least early in his campaign, he differed from his rivals in that he would not pledge to simply tear it up. Rather, he said, he would rigorously enforce it:

“I’ve heard a lot of people say, “We’re going to rip up the deal.” It’s very tough to do [that] … Because I’m a deal person. And when I make deals … I will police that deal. You know, I’ve taken over some bad contracts. I buy contracts where people screwed up, and they have bad contracts. But I’m really good at looking at a contract and finding things within a contract that, even if they’re bad, I would police that contract so tough that they don’t have a chance. … And the problem is, by the time I got in there, they will have already received the $150 billion.”

Aside from bargaining harder with Iran, Trump does not say how his policy would be different from the present one. He doesn’t appear to have suggested using military force against it and his main knock on Tehran is that they got a better deal from Obama than they should have.

Sanders supports the Iran deal onto which President Obama signed, though he said it did not achieve everything he would like. His main reaction was to say that war should be the very last option. If Iran cheats on the deal, he says, he’ll respond with new sanctions first.

Trump doesn’t seem to have that much to say about Iraq proper. He has complained about Bush’s Iraq War and said he would have fired the former president (though his claims to have strongly opposed that war at the time appear exaggerated). He complains that Bush gave Iraq away to Iran, but does not have any practical suggestions in the aftermath.

With regard to Daesh, Trump says he would bomb the oil fields in the terrorist organization’s control. The Pentagon is already pursuing that strategy, which is more complicated than it sounds. Trump’s notion that oil wealth fuels Daesh is incorrect, since it has a long history and has thrived even when it did not have such resources.

Like Trump, Sanders does not seem to have an Iraq policy per se, though he really was opposed to the 2003 US invasion and occupation of that country.

With regard to Daesh, Sanders is reluctant for the US military to get directly involved in the region again.

Instead, he hopes a local coalition of Sunni Arab powers will form a coalition to take on Daesh. He put the onus on Saudi Arabia:

“Now if this is such a crisis to the region—Saudis have a big air force, you know. They have a lot of F-16s, why aren’t they involved? Why isn’t Kuwait involved?… We went to war to put the Kuwaiti government back. Where are they? Where are the billionaires in Qatar? If these guys in the region think that ISIS is such a great threat, they gotta put some skin in the game.”

Saudi Arabia has in fact done almost nothing against Daesh. Its efforts are being put into fighting a tribal rebellion in Yemen and into overthrowing Bashar al-Assad in Syria (a goal Sanders thinks should be much postponed).

Sanders has also sometimes talked about Jordan taking the lead, but that is ridiculous. Jordan is a small country of 6 million and can’t be deploying major military force in Iraq or Syria. It has engaged in some bombing raids alongside the US and that’s about all you can expect.

So both of these anti-Establishment candidates are relatively non-interverntionist. They are sanguine about Bashar al-Assad remaining in power. With regard to the Iran deal, both have said they would honor and police it, though Sanders endorses it while Trump denounces it. They differ on Daesh in Iraq, though both oppose a big new US infantry and army force in the region. Trump wants to bomb its oil fields and take away its petroleum. Sanders wants to have Saudi Arabia, Jordan and other Sunni regional powers form a coalition and take care of Daesh for the US. Neither plan is in the least practical.

One from the right, the other from the left, both Trump and Sanders can be seen on Middle East foreign policy as reactions against the Neoconservative militarism of the Bush era, which Obama has only partially rolled up. The actual Neoconservatives are clustered around JEB!, and Sheldon Adelson is backing Rubio. Neither showed well last night.