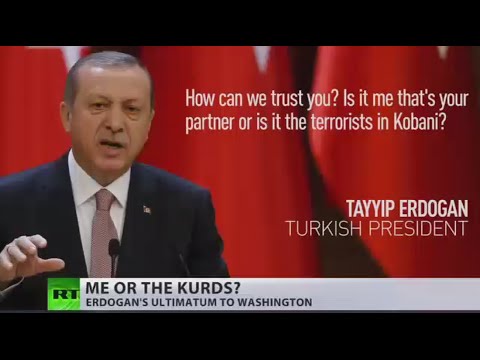 Reuters reports that Turkish president Tayyip Erdogan allegedly bullied European leaders and threatened to drown Europe in refugees if his terms were not met. He wanted 6 Bn Euros to keep the 2.5 million Syrian refugees in Turkey happy enough in that country to discourage them from moving to Europe.

In the course of the meeting, Erdogan was alleged to have interrupted the EU’s Jean-Claude Juncker and European Council president Donald Tusk repeatedly.

For all the world like a Donald Trump, Erdogan is said to have rebuked Juncker, who is from Luxembourg, for disrespecting him, belittling him by saying that Luxembourg is just a village in Turkish terms and that Turkey’s population is 80 million [a slight exaggeration].

If this report is correct, Erdogan has become slightly unbalanced.

He had a tiff with another of his NATO allies on Monday, complaining bitterly about the visit of American official Brett McGurk to Kobane.

That city in Syria’s northeast was besieged by Daesh (ISIS, ISIL), and would have fallen had it not been for US airstrikes in support of the YPG guerrillas. The latter are considered by Turkey to be a branch of the Kurdistan Workers Party (PKK) and so to be terrorists. The US disagrees, and has found them the most reliable ally against Daesh.

Erdogan said that the US had to choose between him and the terrorist Kurds.

But actually the US doesn’t have to choose, and won’t. The Department of Defense finds the Syrian Kurds irresistible as as partner because they are willing actually to fight Daesh. (Turkey, aside from a few air strikes, hasn’t done much about Daesh).

But Turkey is a NATO member, so the US will find some boilerplate language to make Ankara satisfied.

At a time when his plans for Syria are in deep trouble, Erdogan seems to be alienating the very allies he most needs with his bluster.

RT: “‘How can we trust you?’ Erdogan urges US to choose between him or Kurds”