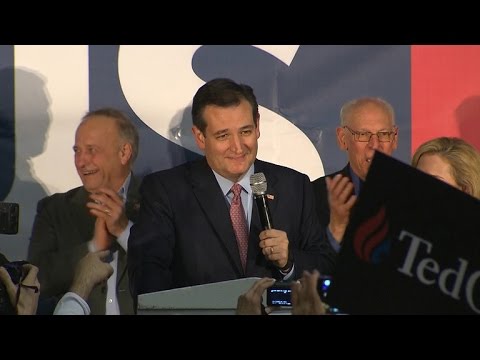 The Iowa Caucus voters likely voted mainly on domestic policy issues, though security and terrorism have been a big part of the campaigns as well. Now that the smoke is clearing, it is worth considering the foreign policy implications of the winners of the primary.

Iowan conservatives awarded the victory to Ted Cruz. Cruz has pledged to carpet-bomb eastern Syria and northwestern Iraq to get at Daesh (ISIS, ISIL), leveling e.g. Mosul (a city, in 2013, of 2 million, i.e. the size of Houston). Cruz also hinted that he might drop a nuclear bomb on eastern Syria (he wondered if the desert sands would glow thereafter). The population of al-Raqqa Province in eastern Syria before the rise of Daesh was roughly 900,000, of whom I figure a good half have fled the brutal rule of the phony ‘caliphate’. The province is thinly populated. The capital, also called al-Raqqa, probably had a population of 220,000 before Daesh took it. My guess is that at least half the people have run away. In any case, a nuclear bomb would kill everyone left in al-Raqqa and the radioactive fallout will likely land on Israel, Jordan, Lebanon, and Turkey– American allies.

On the other hand, Cruz is sanguine about allowing Syrian dictator Bashar al-Assad to remain in power.

So Iowans chose the Mad Bomber over everyone else.

The second place was taken by that yuuuge loser, Donald J. Trump. Me, I like people who don’t come in second place. Trump advocates turning Syria over to Russian President Vladimir Putin. Trump wants to start major trade wars with Mexico and China. He wants to abrogate the Iran deal and take over Middle Eastern oil from its owners. He will charge Saudi Arabia for supplying it with an American security umbrella.

Marco Rubio has said of Daesh (ISIS, ISIL), “This group needs to be confronted and defeated. They are not going to go away on their own. They’re not going to turn into stockbrokers overnight or open up a chain of car washes. They need to be defeated militarily, and that will take overwhelming U.S. force. ” He insults Iran’s Shiite Islam.” Rubio wants to overthrow Syrian dictator Bashar al-Assad as soon as possible. Rubio wants to exclude Syrian refugees from the US, except for Christians, orphans and the elderly.

Rubio’s major backer is corrupt Likudnik casino magnate Sheldon Adelson, who also gave us Bibi Netanyahu, so he would further crush and immiserate the Palestinians.

They gave fourth place to Dr. Ben Carson. It is genuinely difficult to know what Carson’s policies are, since he is a confused conspiracy nut. I mean moreso than the first three. But anyway he is not going to be president.

Neither in all likelihood are the first three. They’ve alienated the Latinos, African-Americans, women, gays, non-religious, youth, and other major constituencies. To win they would have to get the three million votes out there that Mitt Romney couldn’t. Instead they’ve chased those 3 million away again plus lots of others. Romney would have done worse if Latino youth had voted in greater numbers (as they did in 2008), and the word is that Trump has galvanized them to register and participate in this one. W. called the 2008 McCain-Palin campaign a “seven-spiral crash.” This one has more spirals.

As for the Democrats, whatever the final vote tally they more or less tied. So Iowan Democrats can’t make up their minds between a dovish Sanders who opposes most interventions in the Middle East and the more hawkish Hillary Clinton. But note that both support the Iran nuclear deal and neither would put ground troops into the Middle East. Both are therefore way less hawkish than most of the Republican candidates.

So, to sum up. Iowa Republicans had difficulty making up their minds between crazy and completely insane. More reasonable conservatives like Kasich and Paul were dismissed from the field.

Iowa Democrats just had difficulty making up their minds, though there was a powerful generational divide, with young Dems going for Bernie and those over 45 favoring Hillary. Since, with the exception of 2008, most elections in the US are dominated by older, wealthier voters, that is bad news for Bernie in my view.