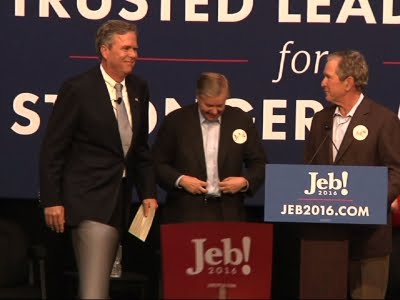 George W. Bush came out of political exile on Monday to be his brother JEB!’s surrogate in attacking Donald Trump.

W. allowed as how “These are tough times and I understand Americans are angry and frustrated, but we do not need someone in the Oval Office who mirrors and inflames our frustration. . .”

He also quoted his father that “labels are for soup cans,” suggesting that name-calling of one’s opponent is not useful political discourse. This from the man who had his swift-boaters wage a campaign of vilification against John Kerry in 2004. Is he annoyed that Trump zings his opponents directly rather than having capos do it for him?

Anyone who lived through the Bush years can only fall down laughing at the hypocrisy and impudence of this kind of talk coming from that man.

When al-Qaeda attacked the US on September 11, 2001, Bush’s response was to mirror and inflame public passions rather than to lead responsibly.

He declared a “war” on “terror” (he probably meant the tactic of terrorism rather than the emotion, but who knows? He isn’t an articulate man). French President Jacques Chirac pleaded with him not to use that diction, and to treat the attack as a criminal matter. Metaphysical wars like those announced on drugs and terrorism are unending and have a way of destroying our democratic freedoms. Now Gandhi-style civil disobedience is being treated as terrorism and government spied on everyone without so much as a warrant.

He so inflamed people’s frustration that he even created a set of color codes to tell us how afraid we should be on any particular day.

Then instead of going after al-Qaeda, the perpetrator, Bush wanted to invade Iraq. Al-Qaeda, as a little terrorist organization, wasn’t a big enough, a satisfying enough adversary. Bush mirrored this public frustration and inflamed the public with a constant barrage of fearmongering about Iraq. You’d have thought the ramshackle, wrecked little country of 25 million with no effective air force, driven into deep poverty by severe US/ UN sanctions, was just about to land at Galveston and march to Washington.

Bill Clinton’s terrorism czar, Richard Clarke, was kept on by Bush but demoted from his cabinet position. He remembers in September, 2001, how Bush demanded that he hang the attacks on Iraq’s dictator Saddam Hussein. Clarke was shocked. He realized that Bush was going to use the pretext of 9/11 finally to get the war on Iraq he had long dreamed of. (He told a biographer in the 1990s that if he ever became president he was going to “take out” Saddam Hussein).

According to the then British ambassador in Washington, even arch-hawk and Islamophobe, British Prime Minister Tony Blair, was alarmed that Bush might run off to Baghdad and leave London exposed to a still-vigorous al-Qaeda. He is said to have promised Bush his support on an Iraq War if only W. would please go after al-Qaeda in Afghanistan first.

Then Bush basically pulled the US military out of Afghanistan with the job half-done and ordered all the resources to be prepositioned in Kuwait for an invasion of Iraq.

Bush warned, and had his officials warn, that Iraq was close to completing a nuclear weapon. He said so in a speech in Dayton, OH, just before Congress was to vote on giving him war powers. We skeptics were dismissed. We don’t want the smoking gun, they said, to be a mushroom cloud. What does that even mean?

Bush’s CIA refused to sign off on some of his manipulative whoppers, like the false allegation that the African country of Niger had sold Iraq yellowcake uranium. Bush, determined to scare the people into a war, sourced the falsehood to British intelligence instead. Who knows if MI6 even thought the fraudulent documents were authentic. Bush and his people knew no decency in their constant falsehoods.

Iraq didn’t even have a nuclear program. It humiliated Bush by having destroying its chemical weapons in the 1990s, as the UN inspectors had demanded. Bush knew Iraq might not have nuclear capabilities, so he used the weasel phrase, “weapons of mass destruction” as a pretext for his splendid little war. He figured if the US occupation forces didn’t find a nuclear program, at least the US would find the old chemical weapons stores, and could declare them the WMD he had been warning about. Even after Bush brutally attacked a country that had not attacked the US, and militarily occupied it, and it became immediately obvious that there were no unconventional weapons there, Bush kept insisting that he was searching for the “WMD.” Finally in August, 2003, Zbig Brzezinski broke the spell and declared on national television that the ‘searching for WMD’ cover story was “increasingly ludicrous.”

And now this man who violated US treaty obligations as signatory to the UN Charter and launched a vicious, unprovoked war of aggression on a defenseless, wretched little country, some 500,000 of whose children had been killed by US sanctions– now this man who assiduously inflamed the passions of the American public and took dastardly advantage of their frustrations and fears after 9/11, has come back out to castigate others for committing the sins he himself perfected.