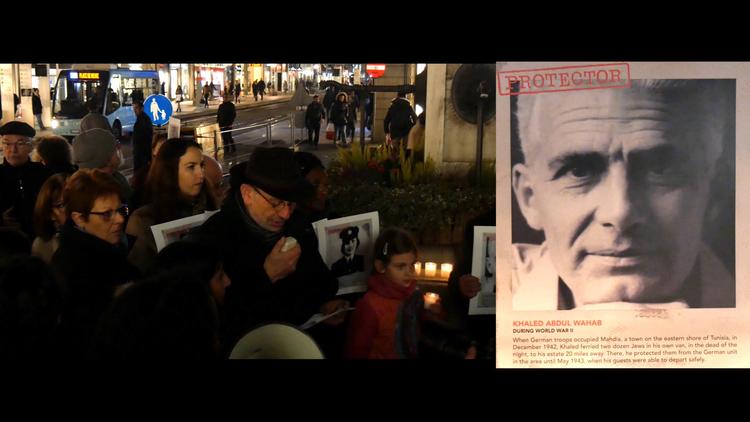 [N.B. The interfaith ‘I am your Protector” Campaign, founded by Dani Laurence, last week commemorated in several cities the Muslims who saved Jews from the Holocaust.

Laurence told Alarabiya, “”The way Muslims are often portrayed in the media, public discourses can lead to fear and hatred. I Am Your Protector highlights Muslim Protectors and gives a platform for people to create posters of Protectors on our website.”

The mirrored posting below from Interfaith Peacemaker focuses on the Albanian Muslim community’s heroic actions in this regard. – J. C. ]

Albanian Muslims During the Holocaust:
Astounding Resistance to the Nazis

For many years the heavy curtain of Communism shrouded Albania from the view of the rest of the world. When that curtain was lifted in 1991 amazing stories emerged about the role of Albanian Muslims saving Jews during the Holocaust that swept across Nazi-occupied Europe.

When the German Nazi army occupied Albania it wasn’t long before the Albanians were ordered to surrender their Jewish citizens . . . That prompted a massive movement among Albanians from top officials to grassroots villagers to shelter Jews. Most of those engaged in the movement were Muslims. Hospitality is a deeply held value for Albanians, so they went to great lengths and took personal risks to shield the Jews from the Nazis. Non-Jewish Albanians would steal identity cards from police stations for Jews to use. The Albanian underground threatened to execute anyone who turned a Jew in to the Nazis. Jews from Serbia, Austria and Greece found refuge in Albania.

As astonishing as this may sound: Not a single Jew from Albania ended up in the concentration camps.

Dr. Anna Kohen, speaking at a Holocaust remembrance in New York City talked about her family fleeing to a mountain village. They all took Muslim names. She said, “Everyone in the village knew they were Jews, but not one person betrayed them.” Her family’s story was repeated again and again throughout Albania.

Sulo Mecaj, a farmer from the village of Kruja who sheltered 10 Jews in his attic, was asked what would happen if the Nazis burned down his house with the Jews inside. “My son will go into the attic with the Jews and suffer their fate.” At the end of World War II there were more Jews living in Albania than at the start of the war, the only country in Europe where this happened. “”

Faith as well as culture played a major role in this life-and-death hospitality. Shyqyri Myrto helped Josef Jakoel and his sister Eriketa evade Germans going house to house searching for them. He said, “Our Muslim religion says we must help someone who is in danger in difficult times.”

Albanian protectors of the Jews were named in the “Rescuer’s Wall” at the U.S. Holocaust Museum in 1995. Albanian Muslim names are inscribed at the Yad Vashem Holocaust Memorial in Jerusalem with the “Righteous Among the Nations.”

This work is licensed under a Creative Commons License.