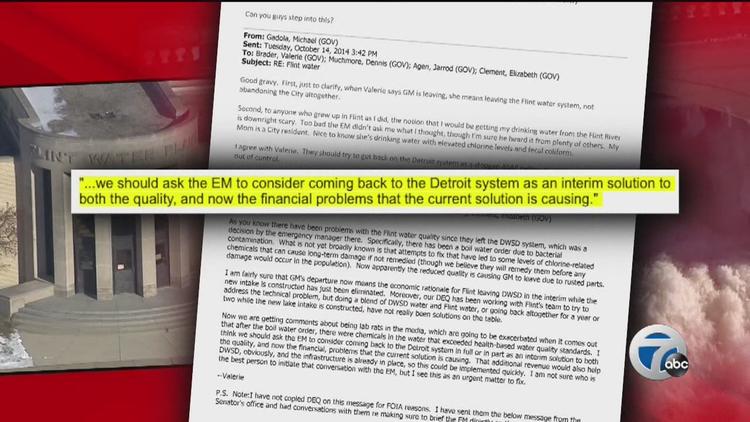 New emails reveal that top advisers knew about problems with Flint water as far back as 2014, reinvigorating calls that ‘the Governor must resign’

“At worst [Governor Snyder has] been lying all along and at best he’s the worst manager on the planet. Under either scenario he’s clearly unfit to lead our state and he should resign immediately.”

Reigniting calls for Rick Snyder’s resignation, emails released Friday reveal that advisers to the Michigan governor knew that Flint’s water was toxic as far back as October 2014.

“My Mom is a City resident. Nice to know she’s drinking water with elevated chlorine levels and fecal coliform,” the governor’s chief legal counsel said in an email sent just three weeks before the Republican governor’s re-election, according to the Detroit Free Press.

“There’s no reasonable person who can believe at this point that every top adviser to Rick Snyder knew that there was an issue, but Snyder knew nothing,” said Lonnie Scott, executive director of Lansing-based watchdog group Progress Michigan, in a press release. “At worst he’s been lying all along and at best he’s the worst manager on the planet. Under either scenario he’s clearly unfit to lead our state and he should resign immediately.”

There’s something in the air…

[…] for returning the city to Detroit’s system drawn from Lake Huron, saying it made economic and environmental sense for an “urgent matter to fix.” She cited bacterial contamination in the treated river water and reduced quality that caused “GM to leave due to rusted parts.”

[…] Michael Gadola, then the governor’s legal counsel, echoed those concerns in an e-mail responding to Brader and sent to the governor’s top aides. He called the idea of using the Flint River as a drinking water source “downright scary.”

Flint “should try to get back on the Detroit system as a stopgap ASAP before this thing gets too far out of control,” Gadola wrote 12 minutes after Brader’s e-mail.

These revelations came just weeks after prior releases of administration emails demonstrated that the governor himself had been explicitly informed of issues with Flint’s water as far back as February 2015, and that his administration had apparently attempted to suppress lead testing results of Flint water in October 2015, as Common Dreams reported.

“Without question, Snyder and his entire administration have failed Flint and the residents of Michigan,” Scott said. “We knew that there was a reason the Governor was refusing to release these documents and now it is all too clear: to him Flint families weren’t as important as the bottom line on his spreadsheet. There are no more excuses and no more scapegoats. The Governor must resign.”