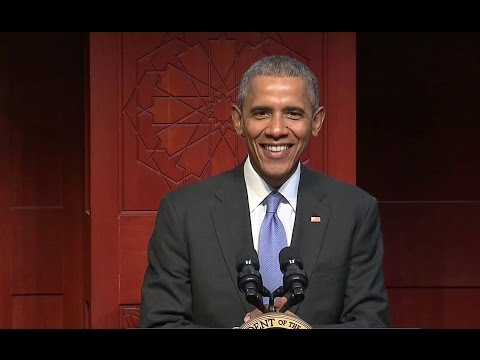 President Obama spoke Wednesday at a Baltimore mosque in an explicit pushback against the hatred for Muslims being promoted by billionaire real estate developer Donald J. Trump and others among the Republican presidential candidates.

Trump has scapegoated all Muslim-Americans for the violence committed by a tiny fringe. He has called for Muslims to be excluded from coming to the United States from abroad, and said he would “look into” closing all US mosques. All Christians are not tagged with the killings at Planned Parenthood, but because Muslims are a minority about whom there is much ignorance in the US, the trope of collective guilt hasn’t been immediately rejected by most Americans. I hope that Obama’s speech will change that.

Obama slammed Trump’s rhetoric as inexcusable and said it had no place in the United States:

“And of course, recently, we’ve heard inexcusable political rhetoric against Muslim Americans that has no place in our country. No surprise, then, that threats and harassment of Muslim Americans have surged. Here at this mosque, twice last year, threats were made against your children. Around the country, women wearing the hijab — just like Sabah — have been targeted. We’ve seen children bullied. We’ve seen mosques vandalized. Sikh Americans and others who are perceived to be Muslims have been targeted, as well.”

Threats were made against their children . Anybody listening to that who has children of their own, or nieces and nephews etc., should get chills on hearing those words. They are a sign of a society beset by thugs.

Obama pointed out that American Muslims are our physicians and our community leaders.

Obama went on to root American Islam in American history. He pointed out that many (as many as 20%) of African slaves brought to this country were Muslims, and they built the United States. We have some Arabic documents about their experiences written by some of them in their American exile (some had been elite in places like Senegal or Mali or Nigeria before being kidnapped). The president might have added that some significant number of the Hispanic settlers in the Southwest were Spanish of Arab/Berber and Muslim heritage. Although their families or they themselves were coerced into converting to Catholicism, they often kept some secret Muslim beliefs and rituals. We know about historical persons of this sort right from the 1500s. I was born in Albuquerque, N. M., a major American city with an Arabic name (likely al-Barquqi or the owner of an apricot orchard).

Here’s another fact: Islam has always been part of America. Starting in colonial times, many of the slaves brought here from Africa were Muslim. And even in their bondage, some kept their faith alive. A few even won their freedom and became known to many Americans. And when enshrining the freedom of religion in our Constitution and our Bill of Rights, our Founders meant what they said when they said it applied to all religions.

Back then, Muslims were often called Mahometans. And Thomas Jefferson explained that the Virginia Statute for Religious Freedom he wrote was designed to protect all faiths — and I’m quoting Thomas Jefferson now — “the Jew and the Gentile, the Christian and the Mahometan.” (Applause.)

Jefferson and John Adams had their own copies of the Koran. Benjamin Franklin wrote that “even if the Mufti of Constantinople were to send a missionary to preach to us, he would find a pulpit at his service.” (Applause.) So this is not a new thing.

I’ve been pointing to texts like those for years. It is clear that the Founding Fathers simply had nothing against Islam and Muslims, as Enlightenment deists, and that in fact it was an important case for them in their imagination of the expansion of liberty. That is why Franklin says “even if”.

It is true that there were no Muslim signers of the Declaration of Independence or of the Constitution, but that was because they did not form part of the British landholding elite of the Thirteen Colonies, not because they weren’t here and productive. in the mid-1700s, Muslim slaves from West Africa taught the Europeans in the Carolinas how to better grow rice innovated in ironsmithing, and introduced the swept earthen floor. They were not recognized as free citizens in the Constitution written by the landholding white elite, but they made an enormous contributions to the health and well-being of that society. They are a key part of the people’s history of the United States.

The silly Glenn Beck riposte about the US having gone to war against the Barbary Pirates doesn’t deserve an answer. The Founding generation of Americans knew the difference between fighting some corsairs and fighting a whole faith. That is, before the last decade most American political figures of any weight knew what prejudice and stereotyping are.

Obama went on to point to the long history of Muslim worship in the US:

“Generations of Muslim Americans helped to build our nation. They were part of the flow of immigrants who became farmers and merchants. They built America’s first mosque, surprisingly enough, in North Dakota. (Laughter.) America’s oldest surviving mosque is in Iowa. The first Islamic center in New York City was built in the 1890s. Muslim Americans worked on Henry Ford’s assembly line, cranking out cars. A Muslim American designed the skyscrapers of Chicago.

In 1957, when dedicating the Islamic center in Washington, D.C., President Eisenhower said, “I should like to assure you, my Islamic friends, that under the American Constitution … and in American hearts…this place of worship, is just as welcome…as any other religion.”

I’ve visited the mosque in Cedar Rapids, Iowa, perhaps the oldest one in continuous operation.

I met a resident of Dearborn once of Lebanese Shiite extraction whose ancestor came to the US in the 1880s. The man went out west and became a cowboy. We don’t usually think about the Lebanese Shiite cowboys. Of course, many cowboys were African-Amrericans, and some of those of Muslim background, who contributed their own specialized knowledge to that craft.

As I mentioned in Engaging the Muslim World , Eisenhower saw Muslims as key partners in the Cold War and was unhappy when pilgrimage to Mecca fell off, so that the US State Department actually gave money to improve the railroad to Mecca.

Obama roundly condemned Islamophobia and fear-mongering against Muslim Americans. Perhaps that is the most important thing he could do as president, simply to say that prejudice and discrimination are wrong and to tell the Muslim-Americans that they are an important and accepted part of the American fabric.

” Some of them are parents, and they talked about how their children were asking, are we going to be forced out of the country, or, are we going to be rounded up? Why do people treat us like that? Conversations that you shouldn’t have to have with children — not in this country. Not at this moment.

And that’s an anxiety echoed in letters I get from Muslim Americans around the country. I’ve had people write to me and say, I feel like I’m a second-class citizen. I’ve had mothers write and say, “my heart cries every night,” thinking about how her daughter might be treated at school. A girl from Ohio, 13 years old, told me, “I’m scared.” A girl from Texas signed her letter “a confused 14-year-old trying to find her place in the world.”

These are children just like mine. And the notion that they would be filled with doubt and questioning their places in this great country of ours at a time when they’ve got enough to worry about — it’s hard being a teenager already — that’s not who we are.

We’re one American family. And when any part of our family starts to feel separate or second-class or targeted, it tears at the very fabric of our nation. (Applause.)

It’s a challenge to our values — and that means we have much work to do. We’ve got to tackle this head on. We have to be honest and clear about it. And we have to speak out. This is a moment when, as Americans, we have to truly listen to each other and learn from each other. And I believe it has to begin with a common understanding of some basic facts. And I express these facts, although they’d be obvious to many of the people in this place, because, unfortunately, it’s not facts that are communicated on a regular basis through our media.”

Obama did not name Trump, but he was stepping into the breach with all his personal charisma and charisma of office to be the anti-Trump.

It was an important moment in American history, and one that historians will long note and analyze. It will not end the current wave of Islamophobia, but it is the lengthiest and most thoroughgoing speech ever given by an American president about the importance of Islam and of Muslim-Americans to the United States. Above all, it was a decent speech, which restored some decency to our public discourse at a time of casual racism and unchallenged fascist sentiments being spouted by lesser men, by demagogues and psychopaths, who threaten our society with division and the creation of second-class citizens and a new Jim Crow. Obama is a symbol of how we got past the original Jim Crow. We will not be dragged back to that, no matter how many billions proponents of such reactionary politics may have.

The White House: “The President Speaks at the Islamic Society of Baltimore”