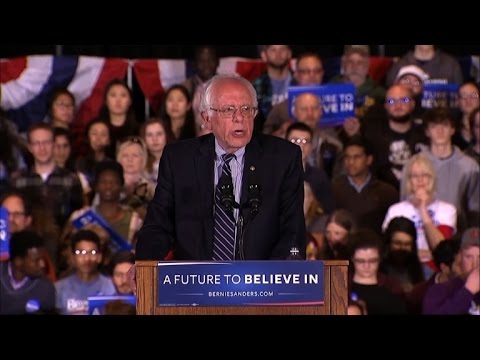 Bernie Sanders has the ideas and passion, but his campaign has run smack into the deep state backing Hillary Clinton.

Bernie Sanders supporters are understandably frustrated about the 2016 primary. He essentially tied Hillary Clinton in Iowa, trounced her in New Hampshire, and gave her a scare in Nevada. But the narrative is Clinton has “cleared the road,” is “back on track,” and “inevitable” again to win the Democratic Party presidential nomination.

Sanders diehards might dismiss this as corporate media bias, but there is little solace elsewhere. Fivethirtyeight.com, the reigning election prognosticator, finds pluses for Sanders coming out of Nevada, such as a strong showing with Hispanic voters and a more than 50-percent jump in self-identified liberals in the turnout from 2008. But the website calls Clinton the favorite in the Super Tuesday primaries given her win in Nevada and expected dominance in South Carolina, which is what the polls suggest. It notes Sanders has been unable to make significant inroads among African-Americans despite how the Clintons brutalized working-class Blacks with harsh policing, welfare, and trade policies in the 1990s.

More significant, Clinton may have thwarted Sanders’s surging campaign fatally in Nevada, and her victory was the fruit of her enduring advantage: the deep state. It also punctuates a questionable strategy promoted by leftists such as Jacobin publisher Bhaskar Sunkara: to use the presidential race as a “way for socialists to regroup, organize together, and articulate the kind of politics that speaks to the needs and aspirations of the vast majority of people.”

Clinton won with the backing of unionized Black and Hispanic workers at “six major Las Vegas casinos” — Caesars Palace, Harrah’s, MGM, Rio, the Wynn and New York-New York. Sanders may have the passion, he may be firing up young people on the losing end of a rigged economy, his policies could roll back decades of class warfare on workers, but his insurgency lacks the array of social institutions establishment candidates depend on in a crisis.

In Nevada, Clinton’s campaign colluded with casino owners, the Democratic Party, and the Culinary Workers Union — which was officially neutral — to deliver the state to her. The Democratic Party set up caucuses at the six casinos so workers didn’t “have to travel to their home precincts to participate.” And until Nevada Sen. Harry Reid reportedly pushed CWU local 226 into action and pressured casino owners to give workers paid time off to caucus, turnout at casinos was forecast at about a hundred voters. The Culinary Workers Union provided 100 organizers at sites including the casinos and coordinated with casino management, which gave workers up to three paid hours to attend caucuses. The state Democratic Party extended the noon deadline by an hour or more for the caucus to begin, enabling large turnouts at the casinos. The Clinton campaign flooded the casinos with volunteers, delivering resounding two-to-one victories. Unabashed about their partisan role, the CWU local political director celebrated the Clinton win and Tweeted that it wouldn’t have happened without Reid.

This is classic corporatism, in which government mobilizes institutions like corporations, unions, and political parties for strategic ends. In this case, the guiding hand is the Clinton camp serving the interests of the capitalist state. It’s powerful, deploying industrial-scale organizing to overwhelm voluntaristic models like the Sanders campaign, which relies more on ideas and emotion to motivate supporters because it does not have access to the institutions the Clintons have.

Now, Sanders has been trying to cobble a power base together. The proliferation of social media and digital media allows him to bypass media that often ridicule Sanders when they notice him. Liberal clicktivist outfits like MoveOn.org and Democracy for America support him. He’s capitalized on objective conditions with a left-liberal response to severe income inequality and benefited from contingent forces like “Labor for Bernie,” which has been endorsed by more than 10,000 union members and leaders. His fundraising has defied expectations, and in the run-up to the Nevada caucus Sanders spent nearly twice as much as Clinton on broadcast advertising.

But that’s not enough. The exigencies of the electoral process force Sanders to compete on terrain that favors Clinton’s pro-corporate substance and methods. His top-down political revolution has sparked grassroots fervor and cash, but the role of organized labor points to the possibilities and limits of Sanders’s campaign. Nurses, postal workers, and communications workers unions have endorsed Sanders, and he cinched a “coup” when the AFL-CIO said recently it would forgo endorsing a candidate. About two-thirds of unions, however, have lined up behind Clinton with millions of members, thousands of staff, and hundreds of millions of dollars in the bank.

Like the Clintons, some unions are bare-knuckle brawlers that outmatch the Sanders campaign. At a Seattle Labor for Bernie rally held on February 21, two sources say the head of the Washington State Labor Council cancelled his planned appearance there. They allege that AFSCME, the largest public-sector union in the country, threatened to cut funding to the council if he spoke.

In Nevada, the pro-Clinton Service Employees International Union passed out fliers portraying her as a supporter of a $15-an-hour wage. Only Sanders supports a federal $15 minimum wage; Clinton calls for a $12-an-hour floor. Her position is so backwards the New York Times chastised her and told her to get on board with the $15 proposal. SEIU spent more than four years building widespread support for $15 an hour and unionization for low-wage workers, but union leaders seem willing to jettison these demands to prove their devotion to Clinton.

That many labor leaders do the dirty work for Wall Street Democrats indicates they have yet to develop a response to the grievous blow Reagan inflicted 35 years ago in the air-traffic controllers strike. Unions serve as an ATM for Democrats, earning labor leaders spots as wallflowers within the chambers of power just to be within earshot of the CEOs, bankers, and billionaires monopolizing the conversation. Their thinking seems to be that while Clinton will heap abuse on workers and unions if she wins, just as Obama and Bill Clinton did, she is not as vicious as Republicans.

Ten months after Sanders announced his presidential bid, the huge crowds, the enthusiasm, the dreams that Americans would finally embrace socialism, at least in word if not in deed, his path to the nomination will narrow if he doesn’t have a strong showing on Super Tuesday and win some key states. The left, disorganized as ever, has little to show from it. Even as obituaries are being written for Sanders, some cling to the airy idea that the Democratic Party can be co-opted in spite of its glaring corruption and dominance by forces allied with Wall Street and the Pentagon.

Sanders has proved that millions of Americans are hungry to reverse neoliberal economic policies. But the task remains the same: to organize radical mass movements rather than believing they can magically spring from a Democratic Party inhospitable to everything the left represents.