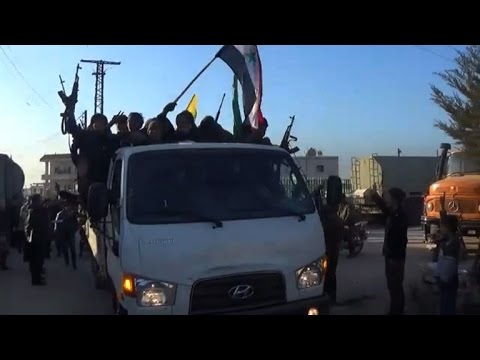 Aided by a massive Russian bombing campaign and Hizbullah and Iranian (or likely actually Afghan) reinforcements, the Syrian Arab Army has broken out of the siege imposed on West Aleppo by rebel forces toward the north, and now seems positioned to besiege East Aleppo, which is under rebel control. The Lebanese newspaper al-Nahar reports on the situation based on a range of Arabic wire services.

In early October, the shoe had been on the other foot, and rebels had cut the Damascus-Aleppo road to the south, depriving regime-held West Aleppo of food and supplies, so that it could have fallen to the Free Syrian Army. Russian aerial bombardment and government troops along with auxiliaries like Hizbullah took back control of the road and allowed deliveries to West Aleppo.

But the western enclave was still besieged from the north, as were two Shiite villages, Nubl and Zahra.

In the past couple of days, the army and its paramilitary allies, especially Hizbullah, relieved Nubl and Zahra. They had been under siege by al-Qaeda (the Nusra Front) since 2012 and only survived via airdrops of food. Had they fallen, hyper-Sunni al-Qaeda would likely have committed bloodthirsty reprisals against the Shiites there, who are said to have organized pro-regime local militias.

Then on Thursday the Syrian Arab Army took Mayer and Kafr Naya, putting the army and its allies in a position to cut off the roads north of Aleppo to Turkey and so put east Aleppo under effective siege.

Al-Nahar alleges that US military supplies have flowed to the rebels consistently during this fighting, but the small and medium weapons (including T.O.W. anti-tank weaponry) were insufficient in the face of 200 Russia air raids in a matter of hours.

It also quotes a source alleging that the Jerusalem (Quds) Brigade of the Iranian Revolutionary Guards Corps (IRGC) was absolutely central to the new government advance and that its leader, Qasem Soleimani, is on the battlefield. Al-Nahar also reported that IRGC Brigadier General Mohsen Qajarian was killed north of Aleppo during the fighting.

Steffan de Mistoura suspended the Geneva peace talks in the face of the Russian bombing campaign and advances on the battlefield. It is alleged that the latter were in part made possible because the Russians tricked the US into pressuring Turkey and Saudi Arabia to halt temporarily resupply of the Aleppo rebels while the talks were going on.

I talked a couple years ago to a journalist who had been in Aleppo, embedded with the rebels, and he told me that the rebel forces ran low on supplies every day, but that there appeared miraculously every morning shipments of ammunition. The implication was that they were being resupplied from Turkey, and very efficiently so. That resupply is now in danger.

Rebel forces in east Aleppo, mostly locals and mostly Free Syrian Army rather than Saudi-backed Salafi Jihadis, are now in danger of falling to a regime reconquest of Syria’s largest city. This could be horrible in its reprisals and torture, and thousands of Syrians are already fleeing north to Turkey, but the border there is closed and they are willy nilly camped in the wilderness.

At the same time, the Kurdish YPG militia has seen an opportunity to unite its Kobane enclave with Afrin to the west, north of Aleppo, and it is also moving into the area above the city, which will reinforce a blockade of rebel-held east Aleppo.

The intrepid Liz Sly at WaPo, among our more experienced and insightful Middle East war correspondents, thinks that the battle of Aleppo could, if the regime wins it, be a turning point in the civil war. The regime could win it all.

Syria’s population was only 22 million before the war, of whom a good 4 million are now outside the country, leaving 18 million. Greater Aleppo before the war had 4 million people. It may still be about that, since people have come in from the insecure countryside. That would be 22 percent of the remaining in-country population. The regime probably has 5 million under its control in Greater Damascus, another couple million in Homs and Hama, and nearly 2 million in Latakia province (which it has completely secured in the past month). That’s 13 of the 18 million, nearly three quarters of the in-country population. It is hard to see how, thereafter, Idlib (1.5 million) and Deraa (1 million) hold out (the regime has already struck into central Deraa in the past couple weeks).

The US, Turkey, Saudi Arabia and other Gulf countries appear now to have a choice of acquiescing in a Russian fait accompli in restoring Syrian regime control to much of the country, or of attempting to greatly increase rebel capabilities. The latter want anti-aircraft manpads, which the US has so far declined to supply. Liz Sly seems to think that in any case that the supply routes are being cut, and the battle will be over before such materiel can reach the FSA units, even if the US changes its mind about supplying it.

These dramatic events may have impelled the Saudis to talk about sending troops to fight Daesh (ISIL, ISIS), which controls areas east and southeast of Aleppo. The presence of Saudi troops on Syrians soil might at least give Riyadh some say in the post-war settlement and prove an impediment to a mere restoration of the status quo ante. This scenario strikes me as far-fetched and desperate; the Saudi infantry is not known for boldness.

On the other hand, given the massacres committed by the regime and its mass murder of POWs, and recent indiscriminate Russian air strikes on civilian areas, I just find it difficult to believe that it can be restored to power in any straightforward way. Russian President Vladimir Putin seems to have a Chechnya strategy in mind, with Bashar al-Assad playing Ramzan Kadyrov, the secular Chechen strong man ruling Chechnya as a comprador for Moscow after Putin crushed the Muslim fundamentalist second Chechen uprising in the early zeroes.

But Syria is bigger and more complex than Chechnya, and aside from al-Qaeda and perhaps some Gulf donors, outsiders recognized it as Russian province.

The Resistance could go underground and go on fighting, using covert tactics and terrorism, as happened in Sunni areas of Iraq during the prime ministership of Nouri al-Maliki.

The Fat Lady hasn’t sung yet, by a long shot.