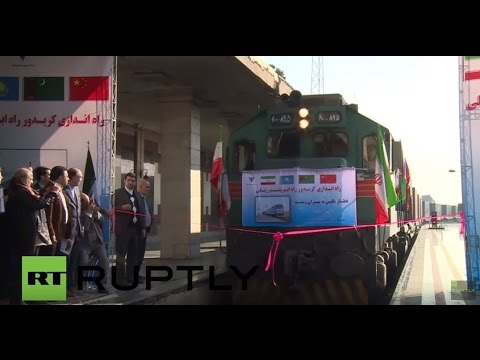 In a sign of China’s increasingly powerful role in Central Asia and the Middle East, on Tuesday a Chinese train arrived in Tehran after a 14-day journey. The freight train just used existing rail links to go from China to Kazakhstan, then to Uzbekistan, then Turkmenistan, and thence to the Iranian capital, Tehran. It is a feat that had never been accomplished until yesterday.

Historians argue that the vast expansion of railroads from 1880 and into the early twentieth century in Europe and North America constituted a Second Industrial Revolution. The rails allowed vast increase in industry, commerce, urbanization and population growth, and increased the velocity of the circulation of goods and money. Iran was prevented from having a railroad by Anglo-Russian rivalry until the late 1920s, and because of the rise of the Soviet Union it was cut off from its traditional markets in Central Asia.

So the Second Industrial Revolution may now be coming to Central Asia and the Middle East, courtesy Beijing.

About a third of Iran’s trade is with China, and the two countries have plans to integrate their economies further.

Chinese President Xi Jinping is promoting a policy he calls “One Belt, one Road,” aimed at improving trade and transportation infrastructure between China and its western neighbors. This New Silk Road” is key to the development of northwestern China, which is distant from the southern ports of Shanghai and Hong Kong. (Urumqi is twice as far from Shanghai as from Karachi or Bushehr, ports on the Gulf).

In the medieval period, the Silk Road was an overland route plied by merchants and pack animals, and which even then linked European markets for light luxury goods such as silk with Chinese markets.

There are plans for new high speed rail links through Central Asia on which Chinese goods could be carried to Iran and thence to Europe. The two-week train journey of these goods through Kazakhstan and Uzbekistan today was already less than half as long as the sea journey from Shanghai to Bushehr would have been.

Asadullah Askarawladi, the head of the Iran-China Chamber of Commerce, announced a few days ago that China will dedicate $20 billion in new finance to Iran in the coming years.

The train that pulled into Tehran had traversed over 10,000 km.

With the end of international sanctions on Iran because of the successful nuclear deal, Iran and China are seeking to intensify of their economic relationship.

It is planned that the train will not have Tehran as its end point in future, but would go on to Europe through Turkey. (Back in the 70s I once took the train from Istanbul to Tehran, which was considered the last leg of the old Orient Express.)

China is in the course of binding Central and West Asia to itself economically through long term trade deals and building infrastructure to thicken Chinese trade with this region. It seems highly likely that these economic relationships will turn at some point into politics.