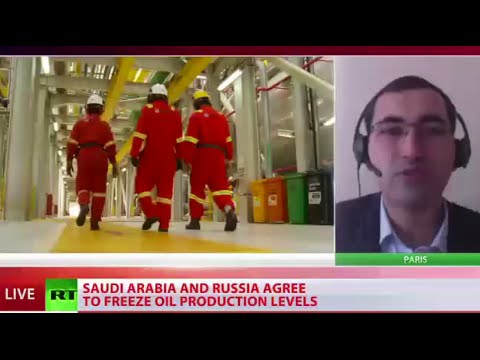 Saudi Arabia and Russia, the world’s two most powerful oil producers, have reached a tentative agreement to freeze oil production at its current levels. As the first deal between an OPEC and non-OPEC member in 15 years, it marks a significant declaration of intent. But it is not geared toward buoying oil prices, as some might hope. Rather, it has much more to do with blocking Iran’s re-emergence as a global oil exporter.

The agreement between the two countries to keep output at January levels led to much noise of a market rally, with little to show in the way of gains. The benchmark price of Brent crude jumped briefly from US$33.4 to US$35.55 a barrel but it will not lead to a sustained rise in prices.

The story is about much more than just prices. The current state of play is that both Russia and Saudi Arabia, the number one and two oil suppliers, respectively, are trying to stop Iran from making any further inroads into the global oil market.

Saudi Arabia has always been at loggerheads with Iran when it comes to oil production – and everything else besides. It is aware that oil prices will fall further when sanctions on Iran are completely lifted. By acting now, it is hoping to pressure other major producers to follow suit, and that Iran will fall into line with the other members of OPEC.

Another concern for Saudi Arabia is losing its position as the main strategic partner of the US to Iran, especially after failing to dissuade the US from removing economic sanctions against Iran for its nuclear program. It is hoping to put Iran in its place by limiting the gains it can make from the uplift in economic sanctions.

It is difficult to understand the reasoning behind the Saudi-Russia friendship. They are, after all, the two biggest oil producing rivals who are now presenting a united front on oil supply. They are also backing opposite sides in the Syrian civil war, all the while trying to convince the world that they share a common cause in stopping the global oil market rout.

But the 70% drop in oil prices has hit the economies of both countries hard. Saudi Arabia is running a budget deficit close to more than 15% of national income and burning through its cash reserves to plug the gap in oil revenues. Russia too is expanding its deficit to cover its costs.

The shared pressure seems to have brought the two rivals together. The Saudi Arabian promise to curtail production is part of a strategy with the US to pressure Russia to drop its support for Bashar al-Assad, the Syrian president, at a time when the Russian government is suffering from the effects of low prices.

“If oil can serve to bring peace in Syria, I don’t see how Saudi Arabia would back away from trying to reach a deal”, a Saudi diplomat told the New York Times.

It is evident that the output freeze could bring stability to the market, but it will not lower record high oil supplies. The only thing that is certain is the suffering of high cost producers, including the US shale industry, which is set to continue.

Markets have been rightly sceptical of Saudi Arabia and Russia’s announcement of a production freeze. Although Iran welcomed the deal, it has made no promise of curtailing its production. And when it comes to OPEC’s commitment to a production freeze, the potential for “quota cheating” (where struggling members overproduce to increase revenues) is as high as ever.

How long we can trust the Saudi-Russia deal to last is open to question too. While Russia and Saudi Arabia appear to have put aside their differences for the time being, their longstanding mutual distrust could well change things. Russia has always shunned OPEC, the Saudi-led oil exporters cartel and historically resisted any binding coordination with it to bolster global oil prices. There is little reason to expect a real change of heart.

So the output freeze may stabilise the market for the time being and send a clear message to Iran that there is still a long way for it to regain back its economic glory. But it is a long way from ensuring the struggling economies of oil producing countries survive the biggest crisis in the global oil market.