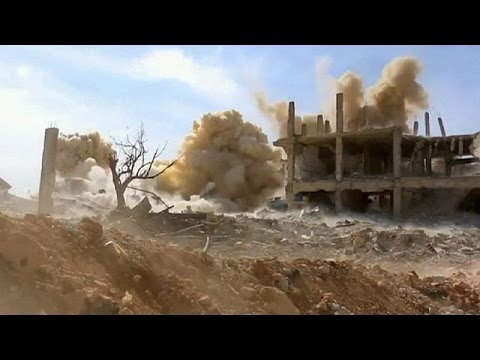 The current war against the Kurds and oppositional voices is being waged to push an autocratic presidential system.

The surprising electoral success of the pro-Kurdish HDP in last year’s June 7 elections denied the ruling AKP a majority for the first time since 2002 – a majority the AKP needs in order to make President Recep Tayyip Erdogan’s dream of regime change come true. Early elections were set for Nov. 1, 2015. In the lead up, the Turkish state stepped up repressions against the HDP and its supporters, violently imposed military curfews in predominantly Kurdish cities, while ending the peace process with the PKK had ended.

President Erdogan’s strategy of creating instability had worked. His country was put in a permanent state of exception so that voters turned to him in search of stability. There is an often recited formula about German politics: “Crisis times are the chancellor’s times.” The regained majority of the AKP in the Nov. 1 elections certainly has affirmed that formula.

Yet Erdogan is still in need of a two-thirds majority in Parliament to change the regime into a presidential system officially. This time, however, he has bet on a concept of war, hoping to be as successful as in the last elections which he won because he had already systematically weakened the institutions of the state and freed himself from the shackles of parliamentary control. He brought the state institutions under his personal control, procured his own new instruments of power and has established a de facto presidential system. This is the interim report on a silent coup.

The pillars that bear the de facto presidential system consist of three forces: the legislative, executive, and the judicial — an independent press can also be counted as a fourth force in many democracies. Erdogan already rules a majority of the Parliament, the Department of Justice, security departments, and media, besides civilian institutions, such as the powerful Turkish Foundation for Youth and Education (Türgev), which is largely run by Erdoğan’s son Bilal. A deeper look inside this power machinery should facilitate understanding of the Erdoğan system.

The Department of Justice as Protective Shield

Erdogan has set up a parallel justice system in 2014 to adjudicate on his Parliamentary AKP majority: the so-called suhl ceza hakimlikleri. Most of its offices are occupied by criminal judges who are loyal to Erdogan and decide on investigations and arrests in single judge rulings. These individual decisions target opposition figures and “subversive” journalists. One such criminal judge, for instance, has charged Can Dündar and Erdem Gül, two journalists from the oppositional newspaper Cumhuriyet, after they had published documents revealing Turkey’s secret services to have sent arms to extremists in Syria. The prosecutor demands life sentences.

These illegalities, like aiding extremist groups in Syria, are only possible because Erdogan managed to coordinate the state police force with the Turkish intelligence agency MIT. The head of the intelligence services Hakan Fidan meanwhile does not act like a public officer with a duty to neutrality, but rather as Erdogan’s right hand man. The MIT is increasingly degenerating into something akin to the East German Stasi, a “Turkish secret police,” which only still operates under the command of Erdogan’s AKP.

In the lead up to the Nov. 1 elections, it was the very same secret police that looked the other way during the attacks in Diyarbakır, Suruç and Ankara, when more than 130 people were killed. That was a total failure of the Turkish state. None of the presiding ministers took responsibility for the security of the country. No one has yet resigned.

Erdogan’s henchmen are not limited to the national borders. During Erdogan’s visit in the Ecuadorean capital Quito, the last stop of his diplomatic tour in South America, a group of protesters in solidarity with the Kurds were attacked by his personal security guards, including Diego Vintimilla, a member of the Ecuadorean National Assembly. The scuffle started off after three activist women heckled Erdogan during his speech and were harshly grabbed by his security team. Erdogan however continued with his speech, referring to the incident by saying “such disrespectful types will get the response they deserve.” Similar to how he has been addressing opponents and protesters in Turkey.

The Media as Instrument of Manipulation

The current war against the Kurds and oppositional voices has also been possible due to Erdoğan’s control over the private media landscape. It conducts AKP propaganda against opponents of the regime. The Turkish media inspection board, the Highest Radio and Television Board (RTÜK), made certain that the loyalties lie with the state’s military operations. Media outlets that report critically on the war in the Southeast, the largely Kurdish part of the country, are charged with “terrorist propaganda” or threatened with the withdrawal of their broadcasting licence, as it is the current situation for the Istanbul based news channel IMC TV.

It’s the same media landscape that has been running a witch-hunt against the academics that have signed the petition calling for peace in order to bring an end to the rising death toll in the Southeast of the country. The declaration was initially signed by 1,128 academics from 89 Turkish universities, as well as more than 300 scientists from outside the country. Noam Chomsky, Judith Butler, Etienne Balibar, David Graeber, David Harvey and Tariq Ali are among the most popular names of the many supporters.

Now the Turkish academics are facing criminal and administrative prosecutions after President Erdoğan called them “actors of academic terrorism” and the Council of Higher Education (YÖK) announced an investigation against the scholars that support the initiative. More than 30 academics have been detained for “terrorist propaganda.”

While the AKP propaganda machine is kept in motion, Erdoğan has additionally accumulated a sizable state “reptile fund” of 170 million euros. This fund is subject to secrecy; no parliamentary record of it exists. The “Reptile fund” goes back to Reichskanzler Otto von Bismarck, who organized such a secret fund to combat enemies of the state—he called them “wicked reptiles”—and with this fund he financed operations including secret police measures.

The institutional power of the president is fuelled by social support and an Islamic religious basis that is motivated by a strong Führer cult. In Turkey, there are many Erdoğan admirers, who are ready at any moment to die for him, to defend him, and to threaten critics of the government or even to beat up journalists.

Even more unsettling is the fact that convicted former mafia bosses and ultra-nationalists of the 1990s era “deep state” like Sedat Peker now frequently appear in public, making statements of support for Erdoğan. Peker publicly issued death threats against the academics, who called for an immediate and peaceful end to the curfews, saying: “We will spill your blood and we will take shower with your blood.”

Will the War come to an End?

All of this is a sign of a collapsing state that needs a division of powers. It is no surprise that the think tank Fund for Peace has ranked Turkey at 90th among 178 countries in its annual index on fragile states and posted a “warning” about it. Turkey is well on the way to becoming a failed state.

Power mad Erdoğan has in fact built a parallel presidential system and rules the country from an unlawfully built Ottoman-style palace. His electoral success after fuelling instability in the country has probably encouraged him to take it even further into a strategy of war in order to finally adjust the constitution to suit the power political realities.

The heaviest curfews have been remarkably imposed in those Kurdish cities where Erdoğan’s AKP was almost completely voted out and HDP preserved its electoral strongholds in the last elections. In violently imposing a shoot-to-kill curfews in a de facto state of emergency, the AKP state has not only put Kurdish cities under siege, but has also sabotaged any chance of peacefully negotiating a political settlement.

Driven by a rabid anti-Kurdish ideology boldtered by nationalism, Erdoğan has most certainly seen his war in the Southeast as a chance of “killing two birds with one stone.” Erdoğan is rigidly using a concept of war as a means to win the support of the ultra-nationalist bloc, as well as to push HDP under the 10 percent threshold in order to constitutionalize his presidential system through a constitutional referendum or another early election.

He also aims to weaken the resistance structures that have become more dominant in the Kurdish civil society, so that a possible rebellion as a response to Turkey’s long wanted attacks against YPG and YPJ positions in Rojava (Northern Syria) is prevented already.

Erdoğan’s renewed war against the Kurds, which has already cost the lives of more than 500 people, will may eventually come to an end when his desired autocratic presidency is fulfilled.

When Erdoğan was speaking at a press conference on New Year’s Eve 2015, he was asked by a journalist whether Turkey would be able to keep a unitary state if a presidential system was implemented. Erdoğan answered in the affirmative with the following statement, although his office later claimed this quote was distorted by the media: “There are already examples in the world. You can see it when you look at Hitler’s Germany.”

Rosa Burç is a PhD candidate and research assistant at the Department of Comparative Government, University of Bonn. Her research is on Nation-States and Theories of (Post-) Nationalism.

Burak Çopur (PhD) is a political scientist, Turkey expert and migration researcher at the Institute for Turkish Studies of the University Duisburg-Essen.