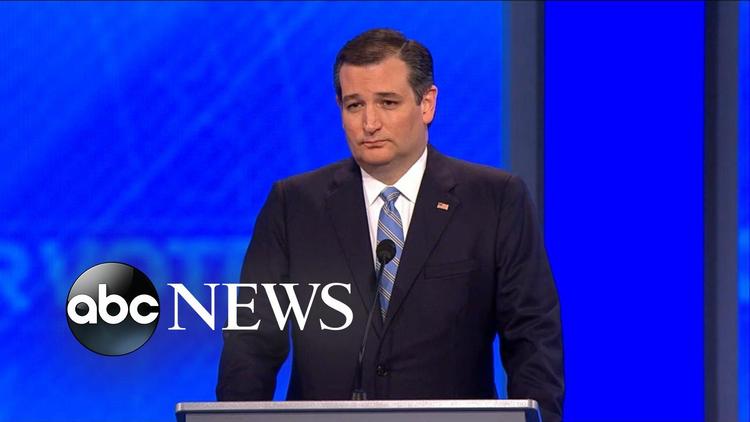 The New Hampshire GOP debate’s most charged moments were probably more domestic, as with Chris Christie putting Marco Rubio in his place as not having actually done anything and as overly reliant on his single script. But inevitably with this gang, war, torture and sundry mayhem did make an appearance. Here are the five most cringeworthy moments:

1. Virtually the only good thing anyone knows about the sleazy Ted Cruz is that he came out against torture. Last night he took it all back. Muir asked him if waterboarding is torture (it is):

MUIR: If elected president, would you bring it back?

CRUZ: I would not bring it back in any sort of widespread use. And indeed, I joined with Senator McCain in legislation that would prohibit line officers from employing it because I think bad things happen when enhanced interrogation is employed at lower levels.

But the European Court of Human Rights has found that Bush-era ‘enhanced interrogation techniques’ such as waterboarding are indeed torture. Moreover, the US Senate found that it hadn’t even worked.

2. Then Muir turned to the one person on stage who is worse than Cruz. Another even worse cringeworthy exchange took place:

MUIR: Senator Cruz, thank you. Mr. Trump, you said not only does it work, but that you’d bring it back.

First of all, that some fringe group somewhere behaves barbarically does not require us to behave barbarically. In fact, the American advantage over the fascist mass parties of the 1930s and 1940s is precisely that for the most part we refused to become fascists to fight fascism. How could you defeat Daesh (ISIS, ISIL) in the eyes of the world if you are just as bad?

Second, what Trump is promising is to commit crimes . Promising to commit crimes against people even in the absence of practical action can be the basis for an arrest and for punishment. The Allies executed a Nazi newspaper owner who spread around horrible anti-Jewish propaganda. But that was all that he had done. Trump is in his league.

3. Then Ted Cruz was asked about his widely panned argument for carpet-bombing Iraq and Syria, which would kill perhaps tens of thousands of innocents.

“As you know, in the first Persian Gulf War, it was 1,100 air attacks a day. Obama is launching between 15 and 30. Now, when I say saturation carpet bombing, that is not indiscriminate.

Carpet bombing does not, of course, actually refer to precision bombing. And in the Gulf War the US for the first time used a significant amount of “smart” weaponry, so that wasn’t carpet bombing. Cruz just wants to impress his Republican audience with his bloodthirstiness and willingness to deploy massive force against enemies. But the officer corps has over-ruled him on his terminology and his plan, so he had no choice but simply to lie and mischaracterize his own argument so as to foil the critiques.

4. Then Rubio was asked about fighting Daesh (ISIS, ISIL). The fact is that Barack Obama is doing pretty much everything against it he can practically do, and all the plans put forward by his critics are basically just iterations of his plan. Rubio said,

“RUBIO: Well, first, we need to understand who they are. ISIS is not just a jihadist group, they’re an apocalyptic group. They want to trigger a showdown in a city named … [Dabiq] between the west and themselves which they believe will trigger the arrival of their messianic figure.

And I’m not saying that’s what’s going to happen. The reason why it’s important to understand that is because these are not groups that are just going to go away on their own. They are going to have to be defeated. And I believe they need to be defeated on the ground, by a ground force, made up primarily of Sunni Arabs.

It will take Sunni Arabs to reject them ideologically and defeat them militarily. That will require a coalition of Iraqis and Syrians, that are also Sunnis, but it will also require the cooperation of Jordanians, Egyptians. We should ask more of the Saudis.”

The Sunnis don’t want to fight Daesh. Jordan is a tiny country and can’t afford to get involved militarily with infantry in Syria, because the stuff would blow back on Amman. Bernie Sanders keeps talking about Jordan, too. If Jordan, which has a border with Daesh, were going to take military steps, it would already have done so.

Obama tried to recruit Syrian Sunnis to fight Daesh, and most of them turned out to want to fight Bashar al-Assad more. The program collapsed because of this. Iraqi Sunnis were already screwed over by the ‘Sons of Iraq’ program and are reluctant to take the lead again, because Bush hung them out to dry by agreeing to leave Iraq without making any provision for them.

So it is nice that Rubio knows about Dabiq and that it would be good to have some Sunnis in the fight, but there is no way on God’s green earth that his vague imagining of an actual multi-country Sunni army marching on Daesh will become a reality. And anyway, this is just an element of the current Obama plan, not something new.

5. When Ohio Governor John Kasich was asked about North Korea, he suggested unleashing Japan on them:

“KASICH: We’ve gotta to be very tough on this. And frankly, I think we could have — I think we could have let the Japanese know that if you want to take action on that — on that missile that’s rising, you want to take action — you will have our support, if that’s what you think is the best thing to do. We cannot continue to be weak in the face of the North Koreans, or, frankly, in the entire rest of the world.”

Even with the small changes in the legal interpretation of the pacifist Japanese constitution instituted last fall by PM Shinzo Abe, it would not be constitutional for Japan to simply go to war against North Korea. The Japanese public wouldn’t put up with it. Kasich seems completely unaware of what talking about Japanese taking military action against N. Korea looks like to Asia, including to Beijing. All this is not to mention that North Korea has an atomic bomb, whereas Japan does not. Kasich is often forced by the bloodthirsty war cries of his rivals to pledge to do something completely unrealistic.