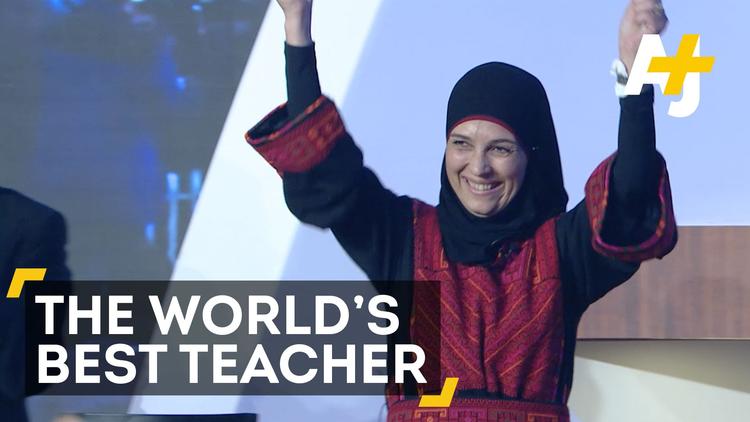 BETHLEHEM (Ma’an) — A Palestinian teacher from the occupied West Bank on Sunday won the Varkey Foundation’s 2016 Global Teacher’s Prize “for her work educating children in Palestine.”

Hanan al-Hroub, from Duheisha refugee camp in the southern occupied West Bank district of Bethlehem, was announced the winner of the competition during the award ceremony in Dubai.

About 8,000 teachers from all over the world had competed for the award.

“Every day we see the suffering in the eyes of our students and teachers caused by Israeli occupation’s military checkpoints,” al-Hroub said during her acceptance speech.

“Teachers work hard to free the childrens’ minds from violence and turn it into dialogues of beauty,” she continued.

According to the foundation, al-Hroub went into primary education “after her children were left deeply traumatized by a shooting incident they witnessed on their way home from school.”

She was chosen as a finalist in the competition for her teaching method, which focuses on non-violence by “teaching through playing” and interweaves counseling for students struggling with behavior problems due to the violence Palestinian children are subjected to through Israel’s occupation.

“We want our children to live in freedom and peace, as their peers all over the world,” al-Hroub said.

Al-Hroub also suggested that 2016 “be dedicated to achieving hope for Palestinian teachers who plant hope in the minds of our children.”

“Teacher Hanan al-Hroub accomplished the impossible despite of all the obstacles put in front of every Palestinian by the Israeli occupation; she makes us proud,” Hamdallah said in a statement.