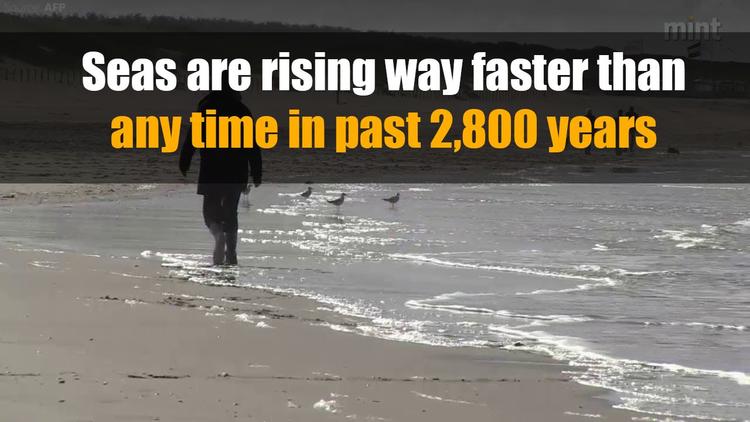 The US corporate press is letting the presidential candidates set the agenda. Occasionally someone will step out of line, as Fox’s Megyn Kelly did when she pressed Donald Trump on his misogyny and general disrespect of women. But virtually no one in the mass media has held the candidates’ feet together on climate change.

February 2016 was the hottest February on record. While the El Nino / El Nino cycle and other weather cycles can cause fluke weather, the graph of average global temperatures in the past 50 years shows that the increased heat last month isn’t a fluke. At least some important part of the change isn’t just weather (one-off incidents), it is climate (trending change over time).

Here’s what 2015 looked like with regard to average global temperature compared to the hottest years on record: 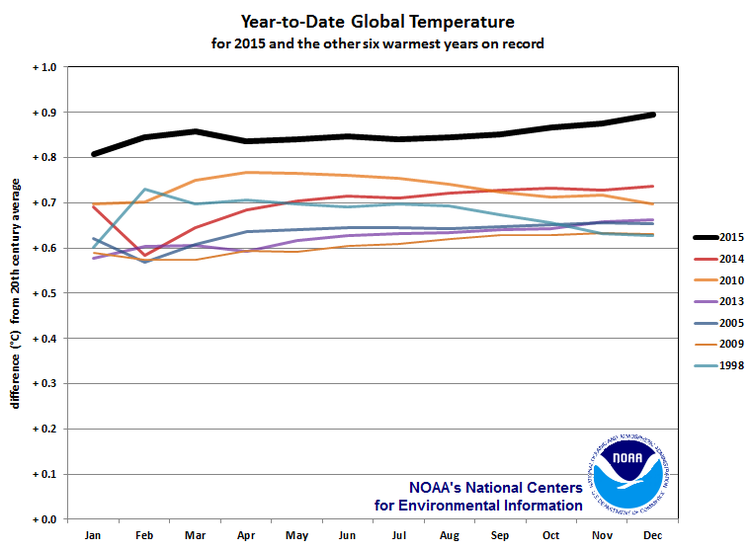 You’ll note how the hottest years on record are the recent ones, and how 2015 outstripped even them.

Climate scientists are discovering that they’ve been low-balling us on estimates of the impact of global warming.

A hotter earth created by the carbon dioxide and other greenhouse gases humans are spewing at catastrophic rates into the atmosphere (by burning coal and gas to heat their homes and provide electricity to office buildings, burning gasoline to move their cars, and by engaging in unsustainable agricultural practices) is causing sea levels to rise. Surface ice is melting and increasing the volume of water in the oceans. Moreover, water expands as it warms.

We knew that the seas are rising, even if former GOP presidential candidate Mitt Romney wanted to make fun of this assertion.

But a new study has discovered that the rate of sea level rise is faster now than anything seen for 2800 years, when Shalmaneser IV was ruling the Assyrian Empire in northern Iraq. 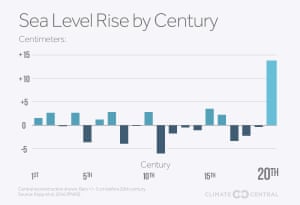 Worse, the rate of sea level rise is speeding up! Some 75% of coastal floods in the US during the past decade or so were caused by human-induced global warming, up from 50% in the 1950s. The number of coastal flooding days in the US has doubled since the 1980s. The Guardian, quoting a new study, observes, “In San Francisco, the number of human-caused flooding events is almost three times above the unaltered trend while Charleston in South Carolina endured 219 flooding days between 2005 and 2014, with the vast majority climate change-driven.” The difference is that people in San Francisco know exactly why this is happening to them, whereas on the whole people in Charleston are burying their heads in the increasingly waterlogged sand.

The finding of increased coastal flooding beyond what nature would have been responsible for, and the finding that such flooding is more and more common and destructive, is only one alarming new insight.

Arctic sea ice has been shrinking 3% a year since satellite observations began in 1979. This year, a conjuncture of El Nino and the Arctic Oscillation has brought freakishly warm air to the top of the world. The extent of sea ice will be smaller this winter than ever recorded in modern history. Some of this freakish arctic heat wave is just weather, i.e. a one-off set of incidents. But as the steady 3% shrinkage demonstrates, some of it is climate, i.e. a long term trend. Arctic ice melt can exacerbate global warming because ice reflects sunlight back into space but dark sea water absorbs it. (These things are complicated, since water vapor can increase cloud cover, which also reflects sunlight; but ice is more efficient in this regard, so we’re looking at net heating).

Arctic ice melting can also affect ocean currents. The big danger is a slow-down of the Atlantic tropical conveyor belt that brings warm water up north. If it is interrupted, ironically enough, climate change causing warming most places could plunge parts of the Northern Hemisphere back into a period of glaciation! That is, not only are we possibly looking at the end of Miami and New Orleans, but Toronto may be in trouble too, at least for a while (the last time such glaciation was caused by the interrupted current, it lasted about a thousand years).

By burning all these fossil fuels at such a massive rate, we’re doing the equivalent of setting off thousands of atomic bombs in the atmosphere. We’re re-engineering the only planet we have, without so much as a schematic.

We deserve to know what people who want to be president think about all this, and what they intend to do about it. With the exception of Bernie Sanders, they aren’t volunteering to tell us. The journalists have to ask them.

It is also possible that corporate capitalism, which both runs the candidates and runs the so-called “news” companies, is about as good at dealing with a rapidly changing environment as the dodo was. Contrary to its self-depiction as agile and efficient, it seems lumbering and blind. Seen a dodo lately? Maybe look in the mirror.

Mint: “Seas are rising way faster than any time in past 2,800 years”