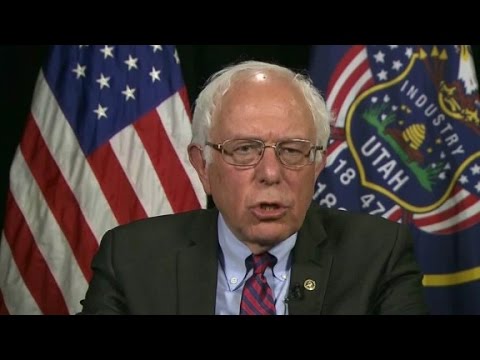 The Vermont senator called himself a “friend” and “partner” of Israel but called for an end to occuption of Palestine.

After Democratic presidential candidate Bernie Sanders decided against attending the American Israel Public Affairs Committee’s annual conference, he outlined his views on the Palestine-Israel conflict and the wider Middle East via video, calling himself a “partner” and “friend” of Israel but not shying away from criticizing one of the United States’ closest allies.

“To my mind, as friends – long-term friends with Israel – we are obligated to speak the truth as we see it. That is what real friendship demands, especially in difficult times,“ said Sanders.

“I am here to tell the American people that, if elected president, I will work tirelessly to advance the cause of peace as a partner and as a friend to Israel.”

Sanders then addressed the need to help Palestinians given the challenges they face. “But to be successful, we have also got to be a friend not only to Israel, but to the Palestinian people, where in Gaza unemployment today is 44 percent and we have there a poverty rate which is almost as high,” Sanders explained.

A week after Israel appropriated huge tracts of land in the occupied West Bank, Sanders joined the United Nations and the European Union in criticizing Israel’s expansion of settlements, saying it “undermines the peace process” and Israeli “security.”

“It is absurd for elements within the Netanyahu government to suggest that building more settlements in the West Bank is the appropriate response to the most recent violence. It is also not acceptable that the Netanyahu government decided to withhold hundreds of millions of Shekels in tax revenue from the Palestinians, which it is supposed to collect on their behalf,” Sanders said.

The Vermont senator also called for an end to the economic blockade of Gaza and a “sustainable and equitable distribution of precious water resources so that Israel and Palestine can both thrive as neighbors.”

“Peace will mean ending what amounts to the occupation of Palestinian territory, establishing mutually agreed upon borders, and pulling back settlements in the West Bank, just as Israel did in Gaza – once considered an unthinkable move on Israel’s part,” he added.

In contrast, Hillary Clinton attended the AIPAC conference and praised the “deep emotional connection” the U.S. shares with Israel.

The Democrat front-runner made it clear she would not remain neutral in the Israel-Palestine conflict and would invite Israeli Prime Minister Benjamin Netanyahu to the U.S. as one of her first moves in the White House.

Clinton also criticized the growing Boycott, Divestment and Sanctions movement, telling Netanyahu: “Don’t let anyone bully you, or shut down debate … especially in places of learning like college or universities.”

Sanders was the only presidential candidate to skip AIPAC this year, which hosts more than 18,000 pro-Israel advocates and lobbyists.