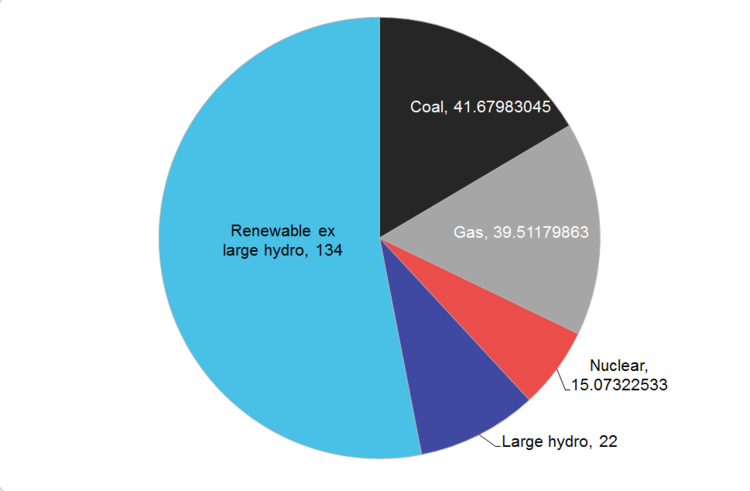 In 2015 energy companies invested more in new renewables power plants in 2015 than in fossil fuel plants for the first time in history. The majority of these plants were planned for the developing countries, which is a sign that the technology is viewed as now less expensive.

“Coal and gas-fired electricity generation last year drew less than half the record investment made in solar, wind and other renewables capacity — one of several important firsts for green energy announced today in a UN-backed report. Global Trends in Renewable Energy Investment 2016 . . . says the annual global investment in new renewables capacity, at $266 billion, was more than double the estimated $130 billion invested in coal and gas power station s in 2015. All investments in renewables, including early-stage technology and R&D as well as spending on new capacity, totalled $286 billion in 2015, some 3% higher than the previous record in 2011. Since 2004, the world has invested $ 2.3 trillion in renewable energy (unadjusted for inflation). (All figures for renewables in this release include wind, solar, biomass and waste-to-energy, biofuels, geothermal, marine a nd small hydro, but exclude large hydro-electric projects of more than 50 megawatts). Just as significantly, developing world investments in renewables topped those of developed nations for the first time in 20 15. Helped by further falls in generating costs per megawatt-hour, particularly in solar photovoltaics, renewables excluding large hydro made up 54% of added gigawatt (GW) capacity of all technologies last year. It marks the first time new installed renewables have topped the capacity added from all conventional technologies. The 134 gigawatts of renewable power added worldwide in 2015 compares to 106GW in 2014 and 87GW in 2013. Were it not for renewables excluding large hydro, annual global CO2 emissions would have been an estimated 1.5 gigatonnes higher in 2015.”

Here is how the new energy generation broke down by type of fuel:

What shocks me is that companies are still investing as much in new coal plants as in new gas or renewables. All fossil fuels are bad and are on their way out, but coal is in investor’s terms already a dead man walking. Why would you do that? Quite apart from being highly polluting and now no cheaper than solar or wind, coal emits more carbon dioxide than other fossil fuels, a deadly greenhouse gas. It will likely just be outlawed in most of the world soon as a health and environmental hazard. So investing in a long-term coal plant is like piling up your cash and setting it on fire (that would also emit a lot of CO2).

It is clear that there is a secular trend upwards and there is no reason to think that will change. One of the things cities like about new renewables plants is that they can lock in price over say 25 years, because the cost of the fuel is zero and won’t change. You never know what natural gas will cost 15 years from now, and you don’t know if the government environmental agency or ministry will outlaw coal.

Scotland just closed its last remaining coal plant, Europe’s third largest. It was, in part, a victim of European Union carbon emissions limits. (That’s why I say it is crazy to invest in a new coal plant).

Exemplifying the kind of thing the UNEP report found, Morocco has opened the first of three big solar plants planned at Ouarzazate on the doorstep of the Sahara (they film Game of Thrones episodes there). Morocco wants two new gigawatts from solar, two from wind, and two from new hydro by 2022. While there are problems with the social relations involved (it is a Berber area and the government used eminent domain to acquire the land), in the medium to long term it will mean much cheaper electricity for Morocco, and less air pollution, and more jobs. The plant uses molten salt batteries and so goes on working at night.

And this is the kind of thing that is happening all over the world where Big Oil, unlike in America, can’t hog the microphone.