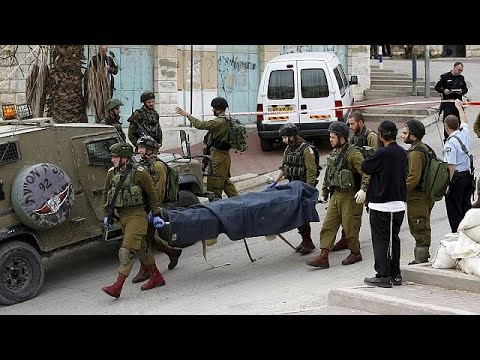 A Palestinian videographer and human rights worker whose video of the murder of a 21-year old Palestinian by an Israeli soldier has received widespread attention has received a number of death threats, as well as gatherings outside his home of Israeli settlers threatening to harm him, and has been told by the Israeli police and military that they will not protect him or his family from the settlers.

The footage recorded by videographer Imad Abu Shamsiya shows a wounded man lying on the ground writhing in pain, while an Israeli soldier nonchalantly shoots him in the head and kills him.

The video footage shows very clearly what Palestinians have been saying for years: that Israeli soldiers frequently shoot and kill Palestinians who are lying down, prone, wounded or otherwise incapacitated and pose no threat.

After submitting a copy of the video he filmed to the Israeli human rights group B’Tselem (an organization which was itself the target of an arson attack last year), the Palestinian human rights activist and videographer Imad Abu Shamsiya was taken in for interrogation by Israeli forces.

According to Abu Shamsiya, during the interrogation, he was forced to hand over the original copy of the video, and then threatened by soldiers.

He told Human Rights Watch that one of the soldiers said to him, “How will you benefit from this video? It got a lot of publicity. Your name is known to everyone. Who is going to protect you and your family from right-wing Israelis? Remember you live in [Tel Rumeida], surrounded by Israeli settlers, who will be able to protect you there?’ Abu Shamsiya said that he felt threatened by the soldiers

He has already received a number of death threats on his personal cell phone, and on Friday Israeli settlers stood outside of his home and shouted insults and threats for hours.

Abu Shamsiya told the Ma’an News Agency, “I now fear for my life and the life of my family. I’m afraid they might attack my house and do me harm.”

No charges have been brought against Israeli settlers or soldiers for the hate speech, threats and physical intimidation by soldiers and settlers alike against Imad Abu Shamsiya.

Imad Abu Shamsiya is no stranger to threats and even attacks by Israeli paramilitary settlers living in Hebron and enjoying complete immunity for their crimes. In 2015, his home was set on fire by Israeli settler youth – none of whom were ever charged or prosecuted for the crime.

At the time, the International Solidarity Movement reported, “He saw the six young Israeli settlers escaping from his roof, as he went back into his house to get his wife and kids out of the burning building. The settlers – all appearing to be in their early twenties – accessed the roof of Imad’s house and poured gasoline down one side. They then proceeded to set the whole area ablaze including a sofa situated in the terrace. “

Imad Abu Shamsiya is the deputy coordinator of Human Rights Defenders, a Hebron based group for documenting the violation and harassment carried out by soldiers and settlers in the West Bank. Several hours before the house burning in 2015, he had reported a knife attack by settlers against Palestinians youths in Tel Rumeida.