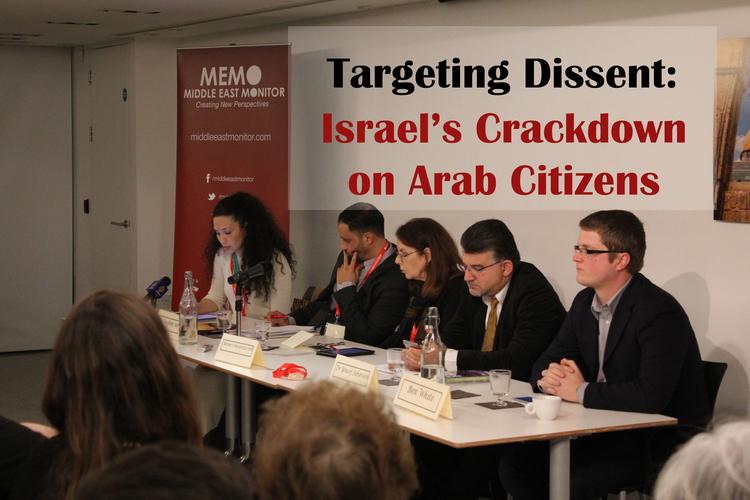 When Israeli Prime Minister Benjamin Netanyahu arrived on Dizengoff Street in Tel Aviv last month after a fatal shooting during which two Israelis were killed and eight others injured, he reassured his people that all steps were being taken “with every means available” to find and prosecute the shooter.

The Israeli prime minister went on to accuse Arab Knesset members of incitement “in mosques, education systems and on social media networks,” and called on the members to condemn the attack.

In an ironic twist, Netanyahu even went as far as to say he could not “accept two countries inside Israel, a lawful country for the majority of its citizens and a country inside a country for part of the citizens where no law is being enforced.”

“It cannot be said that one is an Israeli in their rights, but a Palestinian in their obligations,” he said. “Whoever wants to be an Israeli must be so until the end, in rights as well as in obligations, and the first obligations is to obey the laws of the country.”

I cannot touch upon Netanyahu’s manner of solidarity with his people, his arrival at the crime scene and his speech there, since it scored positive points for the leader in front of his people, voters and supporters.

I also cannot criticize the prime minister for going into details regarding the steps Israeli law enforcement took in the search for the suspected shooter.

He explained to his people exactly how state funds were being used to catch the suspects, without the need for public pressure, campaigns or hashtags to push justice forward, as is often required for Palestinian civilians, who are mostly left to suffer with their “leadership” in the occupied West Bank and the Gaza Strip.

He could have withheld his demand from Arab Knesset members for their loyalty and condemnation of murder, since the leader of the Arab Joint List Ayman Odeh has been repeatedly and incredibly clear on this issue.

I suggest he read from the leader of the Arab Joint List’s page, where the leader states the group is “fundamentally and morally against murder of innocents in any case.”

Perhaps most importantly, the prime minister could have withheld his call for Arab citizens of Israel to feel and act Israeli in their “rights and obligations.“

I do agree, since I consider myself to be Palestinian in my rights and obligations, as there is no need to deny my ancestry for me to declare and prove my loyalty to the country of Israel.

My recognition of and pride in my roots does not pose a threat to homeland security, nor does it count as an attack against it — it is just a reality.

As for my rights and obligations, I believe I fulfill all my obligations to this country up to my personal moral limits. I am docile to its laws and I do not pose a threat to its security.

But being a country that has occupied the land of our grandfathers, Israel is obligated to us — and therefore the rights of all citizens must be equal.

The time has come for Netanyahu to understand that an Arab in Israel self-identifying as a Palestinian does not make them an enemy of the state.

This country has been populated by Palestinians, including our grandparents, who were displaced by the creation of Israel — their houses tore down and taken over.

We are the children and grandchildren of those Palestinians, so we won’t shy away from our origins and have no need to hide them. But there is no need to prove to Netanyahu that I am a good Arab, I am so because I’m a human who has been raised with principles and morals, and find no need to suck up to Israel’s government and its people in order to climb up positions and demand my most basic rights.

I am a human who believes in my abilities, who takes my own rights, without waiting for someone to hand them out.

Let me, just this once as an Arab in this country, be the one to remind the Israeli government and its ministers that this is supposed to be a lawful country, as apparently they are the ones who need to be reminded of the laws of the country. And let me showcase to them some of the ironies concerning how the country deals with Jews and Arabs.

Israeli forces can subdue a Jew when he commits an attack. We all remember the terrorist who stabbed and killed a Jewish girl at a Gay Pride parade, and yet not one bullet was fired and the terrorist was subdued and prosecuted legally.

Meanwhile it’s enough for an Arab to put a hand in his pocket or pull up his trousers at a checkpoint for him to become a painful news article.

They’ll say here that there have been a lot of documented stabbing attempts, and I’ll tell them that they are right, but I have a small question: for all the Palestinians that were shot and killed by Israel, wasn’t there any possibility for them to be subdued and prosecuted ?.

Regarding the policy of house demolitions, the Israeli government deals with Jews by the fundamental law whereby property must be maintained: it prohibits any damage to the property of any man, and not a single Jew’s house has been torn down because they killed an Arab.

However, when it comes to dealing with an Arab Israeli, emergency regulations apply and their houses are torn down, knowing all too well that this is contrary to international laws. The Fourth Geneva Convention says you “shall not punish any protected person for an offense he did not personally commit.”

Where is the law when I watch a report on the news filming a Jewish woman in Jerusalem who says she’s armed with two knives in her car and shows them proudly to the camera? What if an Arab said or did that, wouldn’t that be reason enough to execute him? How do you expect me as an Arab to feel after watching this report?

In summary, in many cases the country’s laws are enforced for Jews only while we Arabs suffer under emergency protocols.

I wish for the Israeli government to remember that this country is a lawful country for Arabs as well.

In regards to army enlistment, I thank Netanyahu for his concern towards our integration into the country.

I personally have always missed this experience and have envied Arabs in neighboring countries for their loyalty and excitement to serve their nation, and especially the Syrians.

But the situation here is different and I refuse to be enlisted in Israel’s army, so let me quote the leader of the Arab Joint List whose support Netanyahu requested in saying, “I am fundamentally and morally against murder of innocents in any case.”

I think Netanyahu is smart enough to understand what I mean by that.

Rita Khoury is an Information Systems Engineer in the Galilee with a license in journalism.