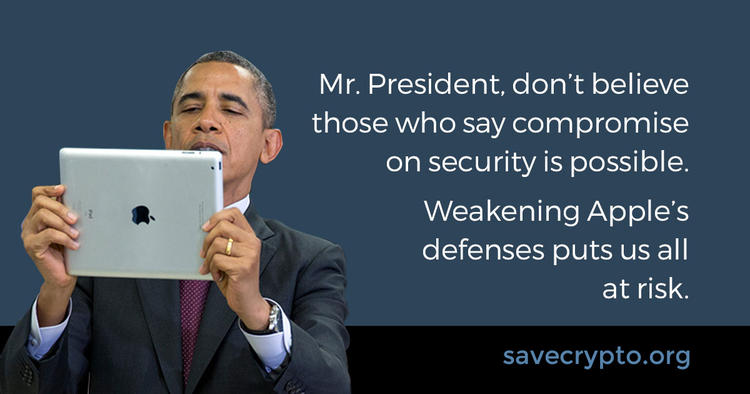 The Apple Fight Is About All of Us

A Joint Statement from Access Now, the American Civil Liberties Union, and the Electronic Frontier Foundation

Apple is engaged in a high-profile battle against a court order demanding it write, sign, and deploy custom computer code to defeat the security on an iPhone. As civil liberties groups committed to the freedom of thought that underpins a democratic society, this fight is our fight. It is the fight of every person who believes in a future where technology does not come at the cost of privacy or individual security and where there are reasonable safeguards on government power.

This is a fight that implicates all technology users. There are already bad actors trying to defeat the security on iPhones, and an FBI-ordered backdoor will only assist their efforts. Once this has been created, malicious hackers will surely increase their attacks on the FBI and Apple, hoping to ferret out clues to this entrance route—and they may well succeed.

The precedent created by this case is disturbing: it creates a new pathway for the government to conscript private companies into building surveillance tools. If Apple can be compelled to create a master key to unlock this iPhone, then little will prevent the government from ordering any company to turn its products into tools of surveillance, compromising the safety, privacy, and security of everyone.

Our organizations are committed to defending the security and human rights of everyday people whose data will be implicated by this shortsighted policy.

We call on the Obama Administration to heed the advice of neutral security experts, engineers, and even his own advisors who have affirmed the dangers inherent in the order issued to Apple. We urge them to reject the calls of those who seek to undermine our security, whether through backdoors into our software, master keys to unlock our digital data, or pressure on companies to downgrade our security.

Over 100,000 people have called for President Obama to stand up for security in our devices through savecrypto.org. It’s time for the President to be accountable to them, and to all of us.

We ask our supporters to join this call by sharing this graphic with President Obama and the rest of the world. 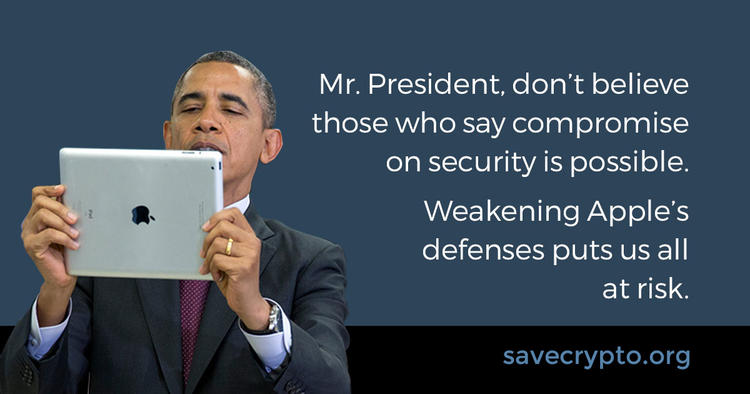