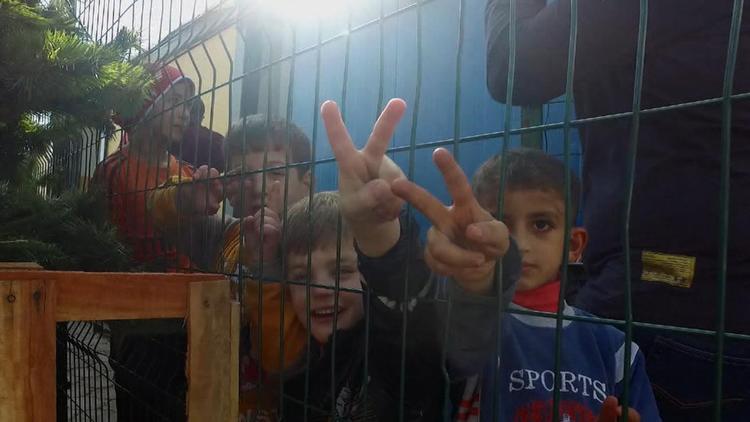 Getting from Turkey to Europe was a cakewalk compared to escaping the [so-called] Islamic State-run city of Fallujah, says one Iraqi. Fleeing families must cross a reservoir, in a ten-passenger boat, on an active battlefield.

“Life had become impossible in the city of Fallujah,” Hamid Abu Ziad says. “So we made up our minds and decided to escape from the city.”

But this was far from easy. The city is surrounded by members of the Iraqi army and the volunteer Shiite Muslim militias, as well as members of the extremist group known as the Islamic State, who have controlled the city since early 2014.

Abu Ziad made arrangements to travel from the city to a kind of no-man’s land on the northern outskirts of Fallujah. “Then we spent several days hiding in the orchards around the town of Albu Shejel together with several other families. It was a nightmare because the place was being shelled continuously. But we had to wait for the right opportunity to cross to the other side of the canal. It was dangerous but it was the only way to take a step toward safety.”

Abu Ziad is talking about an area known as Ibrah, located in Albu Shejel, in the Saqlawiyah district – it’s about ten kilometres northwest of Fallujah. Ibrah is divided into three areas, with one dedicated to ferrying people across the canal, another for livestock and a third for food supplies. But all of the crossing points are being targeted, firstly, by the Islamic State, or IS, group, who are trying to prevent people from leaving Fallujah and, secondly, by the armed forces fighting against the extremists.

At the Thar Thar crossing, families put the young, old and less able on the boat and then everyone else swims behind it.

So getting across is far from easy. “Crossing the Thar Thar canal is the most dangerous part of the journey,” Abu Ziad explains. “I’d been having nightmares about it.”

But he and his family managed to do this and after nine more days, they made it to the relative safety of Baghdad.

Although dozens of families are getting out of Fallujah every day, crossing the Thar Thar reservoir at Ibrah, there are no official figures on how many arrive on the Habbaniyah side, which is mostly controlled by the Iraqi government, daily. People living near the crossing point say the escape route has changed a lot since people started using it because of military operations against the IS group in the adjacent Khalidiya area.

Hashem Abu Ahmed, a man in his 60s, talks about how he got stuck in Fallujah after visiting his recently bereaved daughter there; she had lost her husband and two daughters after their car was caught up in a bombing raid as they tried to flee the city. It took Abu Ahmed, his daughter and her remaining child three months to get out of Fallujah.

“We had to follow this route even though it’s very dangerous and that’s where I lost my son-in-law and grandchildren a few months back,” he says.

What’s happening at the Ibrah crossing doesn’t seem very different to what’s happening with refugees trying to get to Europe, Abu Ahmed adds. “Families take a boat across which is on a sort of pulley system and is pulled across the water by someone by the rope on either side. The boat can only carry ten people at a time and sometimes the IS fighters are on the Khalidiya side and they turn people back,” he told NIQASH.

Some families put the old and young and less able on the boat and then swim behind it to ensure that everyone crosses at the same time and that they don’t waste any time.

Additionally the Ibrah crossing is only the first obstacle on the escapees’ route to relative safety, elsewhere in Iraq. After getting over the water, the displaced families need to get through checkpoints, over the Bzebiz bridge and traverse another contested area near the city of Ramadi. The people leaving come up with all kinds of justifications for their travels whenever they are stopped by IS fighters, and they have many different methods of travelling too.

Mazen al-Halbusi, a former hospital worker, is another local who escaped Fallujah recently. In a journey that took him 13 days, he managed to get to Baghdad. From there he set out for Europe.

“And actually the trip from Turkey to Europe was a lot easier than getting out of Fallujah,” he told NIQASH. “I was trying to avoid getting killed and I saw a lot of death on my way to Baghdad. Whereas during the journey through Europe [as a refugee], I felt as though I was on holiday! I was taking pictures of the nature and of the beautiful places and the waves on the sea. None of that journey made me as afraid as the trip from Fallujah to Baghdad.”