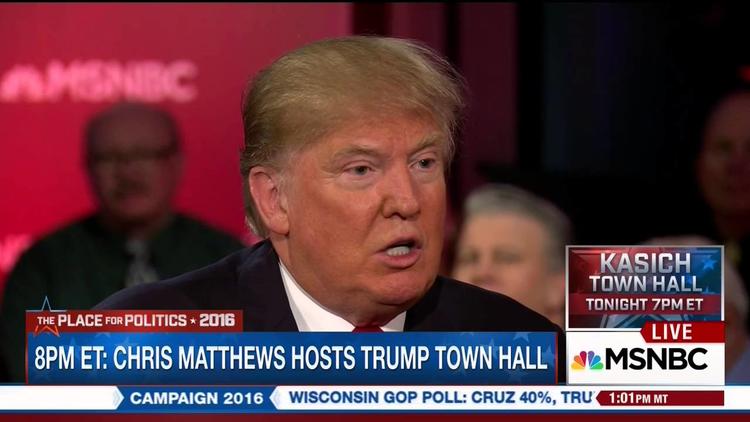 Republican presidential front-runner Donald Trump said Wednesday that women may need to be “punished” for having abortions in the United States.

Speaking at a MSNBC town hall in Wisconsin, Trump said “there has to be some form of punishment” for terminating a pregnancy, adding that the specifics would have to be determined later – and clarifying that it would be women on the receiving end of punitive measures for exercising their right to choose.

“I’m pro-life,” Trump said, according to MSNBC. He added that a ban on abortion is a must, even if it means forcing women to pursue abortions illegally, not to mention unsafely.

Trump’s views on abortion and reproductive rights have undergone a dramatic shift as he seeks the Republican party’s presidential nomination. Formerly pro-choice, the billionaire has embraced an anti-abortion stance during his campaign more in line with the Republican party base.

His latest remarks come as Texas abortion provider Whole Women’s Health is challenging a 2013 state anti-abortion law in the most significant Supreme Court case on abortion rights in a generation.

The case will establish a crucial precedent in terms of whether right-wing-controlled states will be empowered to continue to attack women’s rights and chip away at the historic Roe vs. Wade decision that legalized abortion in 1973.

Trump’s comments come ahead of the Wisconsin primary on April 5.

According to aggregated polling by Real Clear Politics, the GOP front-runner is sitting at 31.8 percent in Wisconsin, 3 percent behind his main rival, Ted Cruz.