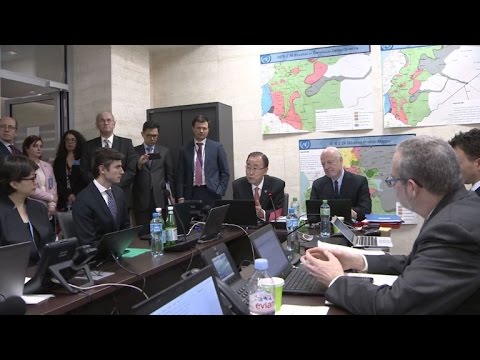 The United States has a federal system, which means that individual states retain a certain amount of autonomy, retain rights and privileges not given to the over-arching federal government.

Likewise, India maintains its unity despite numerous languages and ethnicities in part because its central government has limited powers, and the various states set their own domestic policies on some issues.

Most Middle Eastern states do not have a federal system but rather are ruled by a powerful unitary state. So, for instance, most provincial governors in the Middle East are appointed, not elected. Most provinces do not have elected provincial legislatures. Small elites in the distant capital dictate policy to the provinces or governorates.

Some of this preference for central government rule goes back to the British and French colonial apparatuses.

Where a province is distinctive in the ethnicity that dominates it, a federal state can accommodate that diversity better than a unitary one.

In Syria the regime makes all the important decisions in provinces under government control.

In Syria in the 1960s, the central government took citizenship away from thousands of Kurds. The central government was then Arab nationalist, and the presence of the non-Arab Kurdish people was seen as a deficit detracting from national unity rather than as a strength deriving from multi-culturalism (Kurds do not speak Arabic. Syrian Kurds were left as worse than second class citizens.

Interestingly, in the Middle East the term ‘federal’ is often taken to mean strong central state rule, the opposite of what it means, or should mean, in the West.

Some sites, in contrast, read Ryabkov’s language as suggesting a Russian plot to break up Syria.

One of the likely ways Syria could be restored as a relatively unified country would in fact be a federal system, in which provinces such as Raqqa and Deir al-Zor (now in the hands of Daesh or ISIL), have their own post-Daesh elected governor, their own school curricula, etc. That is, if they are unhappy with the close embrace of the al-Assad police state, then federalism may meet many of their desires without requiring a surrender to extremism.

Likewise, the mistreated Syrian Kurds, who have been recognized as citizens by Bashar al-Assad now that his country fell apart, want a Rojava super-province. But if it were one state among many in a new federal Syria, then Kurds could achieve many of their goals while remaining citizens.