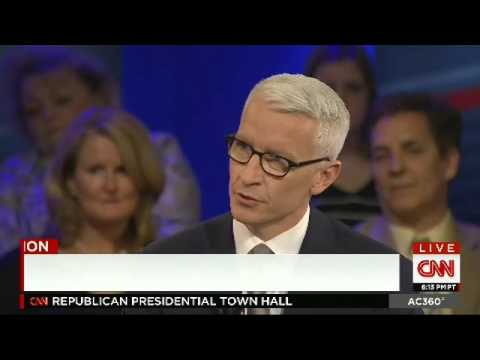 Anderson Cooper’s interview with Donald Trump on Tuesday evening had the advantage of allowing come-backs and close questioning. At one point Cooper pointed out to Trump that he sometimes behaved like a 5-year-old, as with his attacks on Heidi Cruz. At another, he wondered why Trump did not take responsibility when he retweeted or repeated something an audience member said.

It was painful to have such an intense exposure to the cobwebs in Trump’s flighty mind. But if we tried to analyze his roller-coaster stream of consciousness, what general principles could we find that drives his discourse?

First, he is uninterested in civil rights. He does not even understand what a constitutionally protected right is. He never, ever, brings up rights. His world is an instrumental one. If you have some purpose in mind and achieving it requires riding roughshod over people, then you ride roughshod over people. It doesn’t matter that they putatively have rights. The rights must be set aside.

This abrogation of the Bill of Rights in Trump’s mind is clear in this exchange:

“COOPER: All right, let’s go to the audience. I want you to meet retired Lieutenant Brian Murphy. He as first the officer to report to the Sikh temple massacre in Oak Creek, and was shot 15 times. His fellow officer, who is standing next to him, Sam Lenda…

COOPER: His fellow officer standing next to him, Sam Lenda, took out the shooter that day, is also with us. We wanted to just first of all take a moment to thank both of them for their service and their actions.

COOPER: Brian has a question for you tonight. He says he’s – he likes Governor Kasich but he’s still undecided – so Brian.

QUESTION: Good evening, Mr. Trump. I have a question. In light of the Brussels and Paris attacks one of the quickest knee-jerk reactions is a backlash against specific minority religious groups. This, in turn, brings about things that cause damage all over. In Milwaukee, you heard about the Sikh temple shooting. Six people were killed. 99 percent of the men in the United States who wear turbans are actually Sikh and not Muslim. How would you suggest we help educate the public and not alienate these groups and, at the same time, how do we protect the constitutional rights of minority groups like the Muslim, Sikh, Hindu, and Jews, while still addressing radical Islamization?

TRUMP: Well, Brian, thank you for the question. We have a tremendous problem with radical Islam whether we like it or we don’t. We have a president who won’t talk about it.”

Trump went on to complain that Parisians are not all walking around like Wyatt Earp with six-shooters hanging off their hips. Then he alleged that the Muslim community of San Bernardino knew very well that two of their members were stockpiling weapons and bombs for an attack (a lie on Trump’s part). Then he blamed Obama for getting out of Iraq. Then he again called for a Muslim exclusion act. Then he alleged that Syrian refugees were coming into the United States with no paperwork (this is not true– they are vetted for 18 months, there aren’t very many of them, and they haven’t been nearly as much trouble for the country as Trump himself).

Trump never got around to saying how he would guarantee rights for Jews, Sikhs, Muslims and Hindus in an atmosphere that he is creating of ethnic hate and scapegoating toward one minority group, the Muslim-Americans. That is because he cannot conceive of people other than himself having rights. As a narcissist, only he matters to himself. He must get what he wants at all costs.

Anderson pressed him on his agreement with Ted Cruz that law enforcement should be patrolling “Muslim neighborhoods” (that isn’t really a thing).

“COOPER: … In your home city. Chief of Police under Giuliani, as well as now de Blasio, again – out in L.A. He said about Ted Cruz’s proposal, “we do not patrol and secure neighborhoods based on selective enforcement because of race or religion.” Is he wrong?

COOPER: There’s a lot of Muslims in America who hear that, saying we got to look seriously at the Mosques…

TRUMP: … Let me just tell you something, in San Bernadino people know what was going on. These two people – probably became radicalized through her. Who knows? Frankly, right now, it doesn’t matter.

But, these two people want to kill their co-workers, et cetera, et cetera, in their apartment, or their house. In their place where they lived, they had bombs all over the apartment…

TRUMP: … Excuse me – they had bombs on the floor. Many people saw this. Many, many people. Muslims living with them in the same area. They saw that house, they saw that.

One didn’t want to turn them in. He said I don’t know turn them in because I don’t want to be accused of racial profiling. He saw bombs all over the apartment, OK?

COOPER: … Do you trust Muslims in America?

So Trump makes up stuff about what Muslim communities know about say two radicals in their midst who were so good at hiding things that law enforcement and the NSA etc. didn’t know about them. And he wants mosques surveilled and neighborhoods patrolled (which is a violation of the fourth and fourteenth amendments to the Constitution) because he said so. Then he created a frame of “war” to justify this abolition of the US Constitution. The US isn’t in fact at war. No war has been declared. It is involved in some police actions against a terrorist group, for which there is a Congressional authorization of the use of force. And the AUMF has nothing whatsoever to do with Americans’ civil rights unless you believe Glenn Beck that the US government wants to drone uppity white people under its cover.

So Trump does not have a concept of civil rights, which he dismisses as “politically correct” (i.e. inconvenient). He can do anything he wants to anybody he wants any time he wants. The law, the Constitution then become irrelevant. He can frame his actions as a “war” and justify them.

This position, that rights don’t even exist, is why Trump is correctly called a fascist. Part of what fascism is, is a subjugation of individuals to reasons of the State at the whim of state officers, with no pretense of law or legality. Fascist states even just stripped millions of citizenship. If you aren’t a citizen then you don’t have rights. You don’t even have a right to have rights. Trump in his own mind has stripped Muslim-Americans of their citizenship. But he could easily do it to other groups in society if they got in his way. In some ways he has already demoted Latino Americans to being second class citizens, alleging that they are disproportionately a criminal element (which is the opposite of the reality).

Aside from the abolition of civil rights, a second plank of the Trump doctrine is that US security interests are supreme and must be achieved at all costs. The main purpose of the state in his view is the provision of what he calls security. Again, this conception of the government is a fascist one.

Some of his calculation of US interests is economic. He maintains, for instance, that NATO is costly and that the US bears the brunt of the costs, and therefore it should be mothballed. Moreover, since he identifies the interest of the state with security and his main conception of security is counter-terrorism, he sniffs at NATO for not being about counter-terrorism.

NATO contributions are based on the gross domestic product of members. The US pays 22% of th

The US supports NATO economically. But it also spends ten times more annually on its military than the most militaristic of the other NATO countries (Britain) and many times that more than most other European countries. Trump thinks the US spends too little on its military and that the US military is a shadow of its former self.

Part of the reason for abolishing NATO is an insistence on allies’ self-reliance. Thus, he wants Europe to deal with the Ukraine and Crimea crises with Russia. Not the US. That is, in the end, Trump does not have the concept of an ally. It is part of his narcissism. There are no civil rights at home, we have no allies or responsibilities abroad.

Thus, his stated desire for Japan and South Korea to acquire nuclear weapons. Insofar as they are not really US allies (given that in his mind the US never has any responsibilities to other countries and so has no allies), then they should provide their own security. Since North Korea has a nuclear weapon, the only way they can do so is to nuclearize themselves.

Cooper pointed out to him that this is nuclear proliferation on a massive scale, which Trump says he is against. But Trump deflected the criticism on the grounds that it has to be done. The instrumental always takes precedent in Trump’s self-regarding mind over principle. Trump does not think in terms of principles but of interests. He is the ultimate Realist. If an interest requires that something should be done, it should be done. No framework of treaties or constitutional law or first principles or logic must be allowed to get in its way.