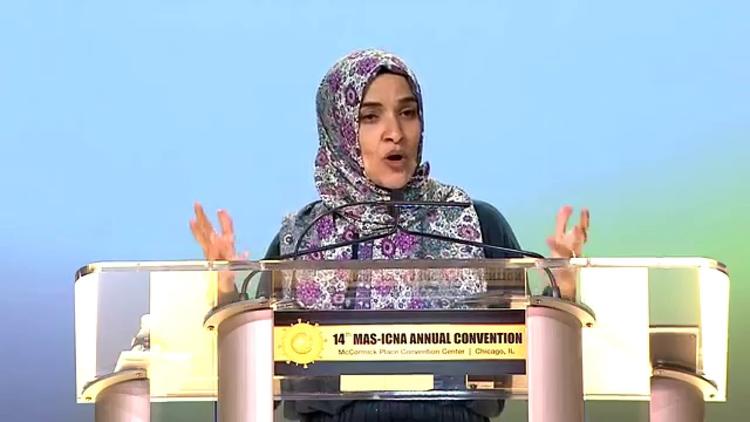 Republican presidential candidate and billionaire bigot Donald J. Trump said in a CNN interview on Wednesday that “Islam hates us.”

“I think Islam hates us” . . . deploring the “tremendous hatred” that he said partly defined the religion. He maintained the war was against radical Islam, but said, “it’s very hard to define. It’s very hard to separate. Because you don’t know who’s who.”

Asked if the hate was “in Islam itself,” Trump would only say that was for the media to figure out.

So since Mr. Trump wants journalists to figure all this out, and since I’m both a journalist and an academic with a Ph.D. in Islamic Studies, let me inform him that he is just wrong here, as he wrong in about 76% of the things he spews past the silver spoon in his mouth.

Islam, of course, isn’t capable of sentiment, being just an abstract conception. The issue is people, i.e. Muslims. So let me help Trump rephrase his question. Do Muslims hate the USA and/or its citizens? Mind you, he is implying that he thinks it is possible that all do.

Trump’s arrogance disregards the possibility that Muslims might have reason to have hard feelings toward the US. In Iraq, the US aggressively invaded and occupied a major Muslim country, and created the conditions in which hundreds of thousands died, millions were wounded, and 4 million were displaced, not to mention throwing the country into long term instability. If the word ‘America’ grated on the ears of Iraqi Muslims, could you blame them? Or there was that time the US CIA overthrew the democratic government of Iran and set it on a path to authoritarian governance ever after. There might be some resentment. Or the US support for turning the Palestinians into permanent stateless victims, often refugees, might, you know, raise some hackles. What is amazing is that despite the horrible things the US government has done to Muslims, most of them nevertheless admire our country.

Here are the reasons that the answer to his leading and hateful question is ‘no.’

1. The countries that are friendly to the US are its allies. One tier of allies is those formally pledged to defend the US from an attack, which is to say, NATO. NATO has 28 members. They include Turkey, a Muslim-majority country of 75 million people, and Albania, another Muslim-majority country. If “Islam” hated ‘us,’ why are two important Muslim countries in a military alliance pledged to defend us from an enemy attack (article 5 of the NATO charter)? Why did Turkey send troops to fight the Taliban in Afghanistan alongside the US and other NATO forces? We can ask another question, which is whether a president Trump could keep Turkey and Albania in NATO, given his virulent hatred for their citizens.

2. The US also has “major non-NATO allies,” a formal legal category, and 16 countries fall into this category. They include Afghanistan, Argentina, Australia, Bahrain, Egypt, Israel, Japan, Jordan, Kuwait, Morocco, New Zealand, Pakistan, the Philippines, Thailand, Tunisia and Republic of Korea. Tunisia, by the way, has just been added to this list, in recognition of its so far turbulent but so far promising democratization process. Of this list, the vast majority of the citizens of the following countries are Muslims: Afghanistan, Bahrain, Egypt, Jordan, Kuwait, Morocco, Pakistan, and Tunisia. That is, half of all our major non-NATO allies are Muslim-majority nations. Egypt and Pakistan are among the more populous and influential countries in the Muslim world. It seems clear that the US has more active allies in the Muslim Middle East than in any other area of the world save Europe itself. So why are they our major non-NATO allies if they hate us?

3. The citizens of many Muslim countries have a favorable view of the United States. The following list is based on a sampling of countries by Pew and is by no means exhaustive, it is just information easily at hand and recent (Dec. 2015): Some 80% of Senegalese, who are mostly Muslim, view the US favorably. So to do 76% of Nigerians, who are 50/50 Muslim and Christian; 62% of Indonesians, citizens of the largest Muslim country in the world (this is about the same percentage as the citizens of Australia, our close ally!); 54% of Malaysians, with a Muslim majority. The citizens of these Muslim-majority countries listed above all give the US higher favorability ratings than do Germans, our NATO ally (50%). Some Muslims love us even if we treat them like dirt. We have completely screwed over the Palestinians for decades, but even 28% of them have a favorable view of the US! Even where Muslims say that they view the US unfavorably, they say they mean by that that they dislike US policies, such as helping Israel steal the land of the West Bank Palestinians or backing unpopular autocrats in the region; many Muslims say that one of the things they dislike about the US is its disrespect for the Islamic faith, so Trump is actually creating the phenomenon about which he is complaining.

4. Muslims admire American political freedoms, and they view the US even more positively in this regard than they do other Western democracies, as Dalia Mugahed’s Galllup polling discovered. Even Iranians feel this way, despite the decades of tension between the two governments:

” . . . large percentages in most of the predominantly Muslim countries surveyed associate the idea of liberty with the United States more than they do other Western democracies, such as Britain, France, and Germany. For example, 68% of Iranians say citizens of the United States enjoy many liberties, compared with only 39% who say the same about Britain, 36% about France and 24% about Germany.”

5. Most Muslims are themselves worried about extremists like Daesh (ISIS, ISIL). Who have been American allies against Daesh on the ground? The Kurdistan Regional Government of Iraq, who are mostly Sunni Muslims, the YPG Kurds of northeast Syria, who are of Sunni Muslim heritage even if they are socialists; the Shiite Muslims of Iraq; and the Sunni Syrians of the Free Syrian Army.

6. The Muslim scripture, the Qur’an, speaks well of Christians and Jews, the religions of most Americans. I wrote elsewhere,

“Dangerous falsehoods are being promulgated to the American public. The Quran does not preach violence against Christians.

Quran 5:69 says (Arberry): “Surely they that believe, and those of Jewry, and the Christians, and those Sabeaans, whoso believes in God and the Last Day, and works righteousness–their wage waits them with their Lord, and no fear shall be on them, neither shall they sorrow.”

When speaking of the 7th-century situation in the Muslim city-state of Medina, which was at war with pagan Mecca, the Quran notes that the polytheists and Arabian Jewish tribes were opposed to Islam, but then goes on to say:

5:82. ” . . . and you will find the nearest in love to the believers (Muslims) those who say: ‘We are Christians.’ That is because amongst them are priests and monks, and they are not proud.”

Trump claims to be a Presbyterian, so he falls into this category of those who are ‘nearest in love to the believers,’ at least as Muslims view the matter.

Trump’s hateful rhetoric should not be being headlined by the US press except in the form of editorials denouncing it.