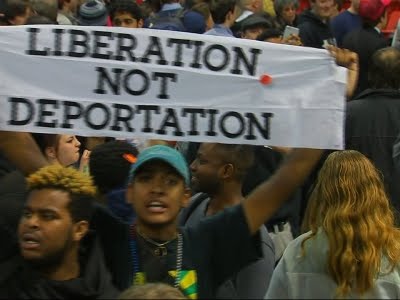 Donald Trump’s incitement chickens came home to roost in Chicago on Friday, when his acolytes attacked the protesters who turned up to a Trump rally. Trump chose the better part of valor and decamped.

It seems obvious that Trump’s constant threatening and bullying of anyone who contradicts him and his cult have led directly to this outcome. Trump specializes in what George Orwell called in “1984” the “five minutes’ hate.” He’ll glare at journalists covering his tent revivals and call them the worst people, as though daring his followers to attack them.

On seeing a protester, Trump says “I’d like to punch him in the face.” And he promised to pay the legal fees of any of his cult members who attacked another person.

So it was predictable that at some point his motley assortment of neo-Nazis, KKK, and biker gangs would get physical with protesters against Trump’s bigoted hatred of minorities.

Dictators have their thugs attack protesters all the time. So here are some dreary moments in the history of modern dictatorship, echoing Trump’s call to punch people in their faces.

There was that time in summer of 2009 when hard liners allied with Iranian President Mahmoud Ahmadinejad attacked protesters who believed he stole the presidential election.

Then there was that time John Lewis was beaten at the behest of the Southern white establishment for trying to march from Selma, Ala.

And there was that rally in Thailand against the military government,

Sometimes a mob even attacks members of parliament, i.e. legislators, on behalf of the opposite party as in Cambodia, even in the absence of a dictator.