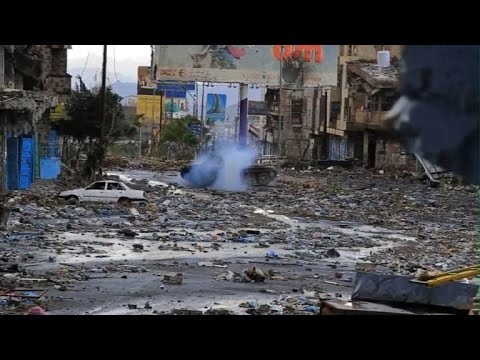 The just-announced negotiations between Houthi rebels and Saudi Arabia may or may not lead to a subsiding of hostilities in Yemen, though early signs are that fierce fighting continues. The United States has been helping a Saudi Arabia-led coalition drop bombs on Yemen for nearly a year now. The campaign has been catastrophically destructive, causing the world’s largest humanitarian crisis. The U.S.-backed operation is also the primary reason that al-Qaida’s most dangerous affiliate is enjoying a major resurgence. In other words, the United States is playing an active role in making Americans less safe—likely for years to come.

The Islamic State has stolen many of the recent headlines, but al-Qaida in the Arabian Peninsula (AQAP), based in Yemen, remains a grave threat to the United States. While it has been years since the “underwear bomber” and bombs hidden in printers nearly brought down planes over American soil, the mastermind behind those devices is still very active. More recently, the group seems to have provided training, funding, and direction for the January 2015 attack on Charlie Hebdo’s offices in Paris.

Accordingly, the United States has made Yemen a focus of its war against terror. Since 2009, it has controversially carried out dozens of drone strikes, assassinating a series of AQAP leaders but failing to weaken the group while also killing innocent Yemenis, infuriating if not radicalizing many. The United States has also supported Yemeni efforts on the ground to dislodge AQAP from its strongholds, most recently in the spring of 2014. The group ceded some territory, but proved resilient, and now, thanks to Yemen’s civil war, it is again thriving.

With the help of Yemen’s deposed president, Ali Abdullah Saleh, the Houthis, a rebel group based in the country’s north, seized Sanaa in September 2014, paralyzing the state and ending government efforts against AQAP. As the Houthis, who include “death to America” as part of their slogan, seem to hate the United States as much as al-Qaida does, their takeover forced the evacuation of U.S. counterterrorism elements from Yemen. This has hampered Washington’s ability to counter AQAP with anything other than much-reviled drone strikes.

The situation improved further for AQAP in 2015. Early in the year, the Houthi-Saleh alliance pushed south from Sanaa, seemingly intent on occupying the entire western half of the country. As its forces closed in on the southern port of Aden on March 25, Yemen’s transitional government, which had already fled Sanaa, now fled to Riyadh. The Saudi-led bombing campaign started the same day.

On that day, President Obama authorized “logistical and intelligence support” for the campaign and the National Security Council announced the establishment of a Joint Planning Cell in Saudi Arabia. Ever since, the U.S. military has been providing targeting intelligence, helping plan airstrikes, and refueling coalition warplanes. U.S officials have justified this support in a number of ways, but the most common explanations include backing Saudi allies, restoring stability in Yemen, and concerns over AQAP. Unfortunately, the past year of excessive bombing has benefitted AQAP by crippling or distracting its enemies and weakening the Yemeni state. Yet the United States continues to play along, actively undermining its own future security.

AQAP has gladly taken advantage of the Saudi-led campaign’s almost exclusive focus on the Houthi-Saleh alliance. In April 2015 it occupied Mukalla, Yemen’s fifth-largest city and the capital of Yemen’s largest province, freeing prisoners and seizing cash and weapons. In December it captured Zinzibar, the capital of Abyan province, and in late January, the capital of Lahj province, Houta, also fell to the group. In February AQAP occupied several more towns as it is now quickly reestablishing control over the territory it held at its prior peak in 2011 and 2012. As busy as AQAP has been, it still took the time to reaffirm in August 2015 that the United States remains its top target.

Much of the work to deny AQAP a safe haven in Yemen, flawed as it was, has now been completely undone. Uprooting AQAP was always going to be a long, onerous process in a state as weak as Yemen, but Saudi’s U.S.-facilitated war has significantly increased the difficulty. The widespread bombing, which has destroyed hospitals and factories in addition to hundreds of homes, has ensured that any future Yemeni government will be unable to take on AQAP by itself for years, if not decades. In effect, the United States has helped to guarantee that its controversial and costly counterterrorism mission in Yemen will have to continue indefinitely.

Though much damage has already been done, the United States must at the very least stop contributing to its own insecurity. First and foremost, it should make its military assistance conditional upon the Saudi-led coalition strictly limiting its air strikes to actual military positions. The United States must not assist with the targeting and bombing of any additional civilian infrastructure targets. Washington should also push the Saudis to devote more attention to helping local groups confront AQAP on the ground.

Meanwhile, the United States should seek to be the largest, most visible supporter of the reconstruction of Yemen. In the present, it should seize every available opportunity to publicly call for, provide, and deliver humanitarian assistance to the Yemeni people, including by pressuring the Saudis to permit the free flow of aid. Washington must also prepare for the post-conflict period, including how it will engage with local actors and facilitate good governance and economic development. All will not be forgiven overnight, but the United States has guaranteed that it will be involved for much longer than that.

Bill Hess received his M.A. in Middle East Studies from George Washington University in 2015 with a professional specialization in Conflict and Conflict Resolution. His capstone project analyzed the response of Lebanon’s political parties to Syria’s conflict. He co-authored a chapter titled “For the Sake of Peace or Justice: Truth, Accountability, and Amnesty in the Middle East” in the forthcoming Hurst/Oxford University Press book “Transitional Justice in the Middle East and North Africa.”