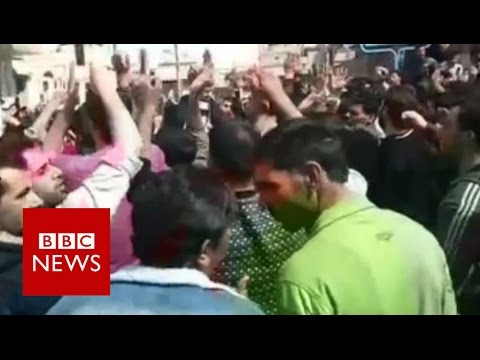 Five years ago this week, protests began in Damascus and Deraa (mainly Deraa) in Syria, on the heels of the overthrow of dictators in Tunisia and Egypt.

Syria’s government was even more repressive than those of the other two countries, however, much more of a Stalinist state on the old Soviet model. That it was dominated at the top by members of the Shiite Alawite sect (some 10-14% of Syria’s population) made it difficult for the regime to compromise, since it feared reprisals and marginalization if it did not maintain control.

A half-decade later, Syria is a basket case and its social statistics look like those of Afghanistan in the 1980s. Half of the 22 million Syrians are now homeless, and some 450,000 alleged to have been killed. That statistic, if true, whould suggest 1.5 million wounded. Most of the dead are young men, which is to say, young fathers, who left behind wives and orphaned children in an ever-married society where the father is central to the family’s welfare. Large swathes of Syria are controlled by an al-Qaeda affiliate, the Support Front, which reports to 9/11 mastermind Ayman al-Zawahiri. Other large swathes are ruled by a so-called caliphate. No one could have imagined this fate for Syria in 2010.

There aren’t really any winners in this war, which have crippled a major nation. But if we put on our objective analysts’ hats, who are the relative winners and losers?

As we speak, Iran is a winner in this conflict They did not want to see one of their few Arab allies overthrown. Their intervention has kept the Damascus government in place and preserved their land bridge through Iraq for supplies to Lebanon’s Hizbullah.

Turkey is a loser. President Tayyip Erdogan had tried to cultivate Syrian dictator Bashar al-Assad before 2011, on the basis of the doctrine of ‘no troubles with neighbors.’ Once the civil war broke out, Turkey strongly allied with the rebels. But Turkish aid has not so far produced a victory. Now, the radicalism winked at by Turkey among the rebels is blowing back on that country. Bombings by Syria-related groups have deeply damaged Turkish tourism in the past 8 months.

Russia is a winner. It only came into the war in a big way in October of last year. But so far at least, Moscow is having its way. Russia has helped the regime survive, and has asserted Syria as a Russian sphere of influence. After the sanctions and isolation produced by Putin’s intervention in Ukraine, by 2015 Russia was privately getting kudos from Western powers like France, which feared Daesh more than it did a Russian sphere of influence in Syria.

The people of Homs and Aleppo are losers, having seen much of their cities destroyed by fighting between rebels (some of them radical) and the regime.

The Kurds of the northeast are winners. The YPG or people’s protection units has emerged as a Pentagon favorite because it is among the best fighting forces willing to take on the al-Assad government. Whereas Kurds were stripped of citizenship in 1963 by Arab nationalists, now everyone wants them on their side.

The people of Raqqa and Deir al-Zor provinces are losers, since they ended up under the brutal rule of the Daesh (ISIS, ISIL) gang.

Damascus is a relative winner, since the city itself never went to civil war, though outlying neighborhoods did. Some 5 million people now live in the capital or its vicinity.

The people of Idlib in the northwest are losers, since they came under hard line Salafi rule, and some of them are under al-Qaeda. Some of the villages ruled by al-Qaeda are Druze, whom Daesh considers heretics, and whom it has mistreated.

The Alawites of Latakia are winners, since their province so far has not fallen to the Sunni guerrillas.

The US Pentagon is a loser, since its program to train moderate Free Syrian Army elements crashed and burned.

But, as I said, there really are no winners in this horrible conflict. In some ways the bigget losers were the UN and the European Union, both of which demonstrated that this sort of humanitarian and security crisis is beyond their ability or perhaps interest to resolve.