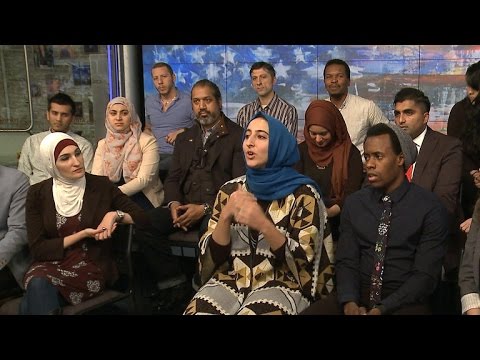 An important hashtag has been circulating on Twitter for the past few weeks. #AboutUsWithoutUs.

#AboutUsWithoutUs seeks to reorient national conversations about Muslim Americans to one that includes Muslim American voices in policy discussions. This is a critical distinction because Muslim Americans have largely been silent stakeholders to issues that disproportionately affect their communities – issues like national security, immigration and civil rights. American Muslims are underrepresented in politics, yet they are overrepresented in disproportionately negative political discourse. The results? A toxic political climate #AboutUsWithoutUs.

Take, for instance, the fact that while Muslim Americans are statistically as likely to be engaged in the community as other religious groups, they are the least likely religious group to be civically engaged. Exacerbating this phenomenon of underrepresentation are negative portrayals in the media. According to a 2015 Media Tenor report, over two-thirds of all coverage of Islam on American TV news is negative.

One way to close this lopsided gap of representation is for American Muslims to become more civically engaged. Specifically, to run for office and affect policies as lawmakers. The Bridge Initiative has therefore compiled information on American Muslims who are currently seeking elected office, or who ran for office in the latest election cycles.

Raheela Ahmad is running for reelection to the Prince George’s County School Board in Maryland. She is an Indian-American, Muslim woman who wears the hijab. She has been politically active since a young age, winning her first election to the Board at the age of 18.

Emmalee Aman is running for the Planning Board of Montgomery County, Maryland, a suburb just outside Washington, D.C. Aman is a Latina American woman and convert to Islam. An environmental justice advocate, Aman is the Director of Programs and Advocacy at Green Muslims.

In November 2015, Kemal Bozkurt was elected to the Lawrence, Massachusetts School Committee as a sticker candidate. Originally from Turkey, Bozkurt is the Acting Director of the Lawrence Public Library. Bozkurt has since resigned from the committee after facing pressure from the mayor to chose between the two positions.

Abdi Ibrahim was re-elected in 2015 to the School Committee in Randolph, Massachusetts. Ibrahim is of Somali background with professional experience as an attorney and former diplomat. Ibrahim also received graduate studies training at Georgetown University.

In November 2015, Fazlul Kabir won re-election as Councilmember on the City of College Park Council. Kabir manages federal projects at a local software firm and holds a doctorate degree in electrical engineering. Kabir also teaches at the University of Maryland, College Park.

Talib Karim ran for the Hyattsville City Council in November 2015, coming up short against the incumbent candidate. Karim heads an advocacy group for STEM education and training. Some of his previous experience includes President of the Muslim Democratic Caucus and staff positions on Capitol Hill.

Nadeem Mazen was reelected in late 2015 as Cambridge City Councilor. A graduate of MIT and son of an American mother and Egyptian-born father, he is the first Muslim to serve a government post in Massachusetts. Mazen received his first violent threat and was smeared in a sensationally titled article “Hamas on the Charles,” shortly after winning reelection.

Heba Mohammad ran for the Green Bay City Council in April 2016, falling short against the incumbent candidate. At 24 years old, Mohammad has long been an active member in her community, despite unfortunate comments made by a member of the Council she seeks to join. Mohammad is the daughter of Arab-Americans of Palestinian descent.

Nadia Syahmalina is running for a Democratic National Committee Delegate position in Maryland. An Indonesian-American woman, Syahmalina has pledged her support to Hillary Clinton.

Siddique Malik sought election in 2014 to a senate seat in Kentucky. He was the first Muslim to do so. Malik emigrated from Pakistan over four decades ago as a teenager. While ultimately unsuccessful, Malik’s campaign was an important first for Kentucky’s Muslim community.

Ilhan Omar is running for State Representative of Minnesota House District 60B. Omar and her family fled Somalia’s civil war when she was just eight years old. After spending four years in a refugee camp in Kenya, she and her family settled in Minneapolis. If elected, she will be the first Somali-American Muslim woman elected to public office.

David Ramadan served until very recently in the Virginia House of Delegates. Ramadan is originally from Lebanon and completed graduate studies at Georgetown University. While Ramadan doesn’t have a religious preference, notorious conspiracy theorist Frank Gaffney demanded to know more about his background when Ramadan initially ran for office – euphemistically coded language to gauge whether or not he was Muslim.

Sam Rasoul is the only Muslim currently serving in the Virginia House of Delegates, a position he was first elected to in 2014. Rasoul is first-generation Palestinian American. Near Election Day, the Republican Party of Virginia sent out a direct mailer claiming that one of Rasoul’s donors was an al-Qaeda sympathizer. Ironically, the donor in question mostly contributes to Republican candidates.

Anesa Kajtazovic relocated to the U.S. at the age of eight as a refugee fleeing the Bosnian War and genocide. She went on to become elected to the Iowa legislature at the age of 24, serving two terms until deciding to run for Congress in 2014. Kajtazovic was ultimately unsuccessful in her bid, coming up short in the primary.

Jesse Sbaih is running for U.S. Congress in Nevada and is already making headlines. A trial lawyer originally from Jordan, Sbaih has publically come out with allegations that Senate Minority Leader Harry Reid advised him against running for the open House seat because “a Muslim cannot win this race.”

While ultimately unsuccessful in California’s 11th district democratic primary, Cheryl Sudduth’s candidacy to the U.S. Congress represents an important intersection of identities – African American, Muslim and woman. A champion of education and closing the achievement gap for underserved communities, Sudduth is the second hijabi Muslim American to run for U.S. Congress.

Atif Qarni ran unsuccessfully in 2015 ran for Virginia’s state Senate. The son of Pakistani immigrants, Qarni is a public school teacher and Marine veteran who served in Iraq. In Qarni’s own words, he was told to drop out of the race by party leadership in the Virginia Senate because “a Muslim could never win,” and that his wife’s headscarf would be a problem with voters.

These candidates and their campaigns reveal two interesting insights: 1) the changing political landscape in which American Muslims candidates are not only running for office, but are winning, too; and 2) the uniquely Islamophobic smear tactics utilized against American Muslim candidates are failing to stick.
A Changing Political Landscape

Considering the tense political climate in the country – or better yet, in spite of it – it is remarkable that these 19 American Muslims have run, or are running, in the current and most recent election cycles. Seven of the above candidates went on to win their seats, and another six have forthcoming elections. If elected, they will join only a handful of American Muslim elected officials across the entire country, two of whom currently serve in the U.S. Congress.

According to a poignant December 2015 Huffington Post article, if you are Muslim and running for public office, be prepared to be called a terrorist. Nadeem Mazen, David Ramadan and Sam Rasoul provide some of the starkest examples of smear campaigns and political defamation by association with individuals or organizations involved in terrorism activity, whether substantiated or not. In the case of Jesse Sbaih and Atif Qarni, the insinuation that a Muslim cannot win the seat he seeks, and by party leadership no less, is demoralizing.

Such smear tactics are dangerously irresponsible. In the case of Nadeem Mazen, they can be life-threatening. They can also be fatal to political campaigns because once a terrorism allegation is made (or an insinuation made that a Muslim can’t win a race because of his/her faith), candidates are often forced to expend valuable time and money to discredit such claims, instead of focusing on their campaign platform and reaching out to constituents.
Conclusion

Smears of terrorism, coupled with negative media portrayals of Islam and Muslims that saturate our television news and newspaper headlines, make it all too easy, if not encouraged, for voters to pass on Muslim candidates at the election box. Which makes it easy for Muslim Americans to go on underrepresented at policymaking tables, yet overrepresented in policies and media coverage that affect their communities.

A note about methodology: Methodologically speaking, it is difficult to compile a comprehensive list of candidates based on religious affiliation because political candidates are not required to register either. Furthermore, with this election cycle being a presidential one, headlines are dominated by presidential candidates, not by state or local ones.